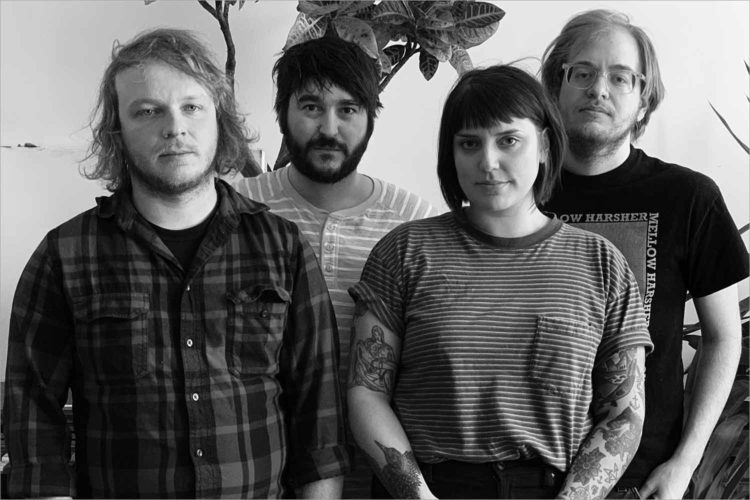 In theory, Miyha is a band that shouldn’t exist.

Between jobs and commitments to other bands, it’s hard for the Madison indie punk quartet — who play the Crystal Corner on April 27 — to find time to practice, let alone book shows or record music. But that didn’t stop them from putting together their first full-length album, World’s Biggest Crush, due April 26.

“We play once a month,” said singer and guitarist Alejandra Perez when I recently met the band at their practice space. “That’s the rule.”

And that’s about all the band can fit in. Perez and bassist Kyle Kohl each work days, and Kohl also plays in Parsing. Drummer Erik Fredine and guitarist Mike Pellino work nights and play together in a handful of other bands, including We Should Have Been DJs and Tippy. The pair also played with Kohl in a band called Spaceship Parts. Perez, meanwhile, was a member of the since-dissolved Tarpaulin. Got all that?

So in truth, Miyha is the sum of a lot of other acts. But don’t ever call them a side project. Erik Fredine was quick to correct me when I made that mistake.

“If Miyha has a gig or is recording, every other band gets put on hold,” says Fredine.

That focus is heard throughout World’s Biggest Crush. The 10-track album finds Miyha sounding fuller than ever before. It’s a far cry from the days (well, day) of drunken two-take recordings, as was the case with their 2017 EP, Happy Birthday, Nick. Laughing, Miyha is “not that kind of band” anymore, Perez assures. The band went for a more structured studio experience this time, working with local punk vet Drew Ferguson as producer.

“It’s an album my grandma would like,” jokes Fredine of Miyha’s newfound polish. “It’s not Mike screaming like a madman, like in most of my punk bands.”

Perez is Miyha’s primary lyricist. She says she was influenced by Hop Along while writing, and it shows (especially on the prickling “Sommers/Summer”). The whole record is hopefully miserable. It mines some of Perez’s least pleasant personal moments — right down to tying a now-disgraced musician to a memory of a shitty ex. But Perez has an innate ability to find warmth even in the most icy situations. It’s an exercise in dynamic shifts, lyrically and musically.

Coupled with a propulsive rhythm section and Pellino’s elastic guitar tones (featuring full-on Midwest emo taps), Miyha sounds triumphant as ever. But despite the crisper sound, Miyha is still the band they always were. A group of busy friends here simply because they enjoy making music with each other, even if that music is occasionally pretty depressing.

“I sit at home and cry and play the guitar until something comes out,” Perez quips about her songwriting process. “Then I come [to practice] like, ‘Here’s a song’ and they’re like, ‘OK, don’t tell us anything. We’re just going to play it while you play it.’ And we do that like 20 times until it sounds good.”

Miyha plays the Crystal Corner Bar on Saturday, April 27, with According to What (which features Perez’s brother Luis) and CNL, the solo project of Proud Parents’ Claire Nelson-Lifson.