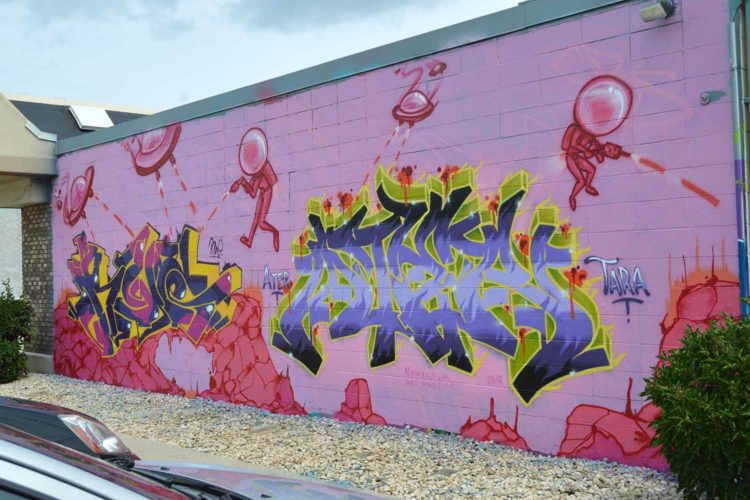 Some of the most vibrant art in Dane County comes from an otherwise nondescript strip mall in the Lake Edge neighborhood near Monona.

Since opening in 2017, Momentum Art Tech (195 Cottage Grove Rd.) has become a pivotal resource for Madison’s street art community. And on Aug. 24, the shop will play host to the inaugural Momentum Urban Arts Fest, an all-day celebration of the medium set to feature more than 70 artists collaborating on murals at over a dozen locations.

“We decided to converge and bring a massive amount of street art to Madison,” says owner James Gubbins about the fest, which is co-hosted by the Monona East Side Business Alliance.

Gubbins, a Chicago native, has spent much of his life around graffiti, first picking up a spray can as a teenager. But after some time away — during which he served in the Marines and started a family — Gubbins saw what he felt was a waning interest in street art. He opened Momentum Art Tech to “keep the torch going” for his lifelong passion, leasing the name from an Oak Park, Ill. location operated by renowned artist and friend Teel One.

In addition to selling paint, original artwork, and offering classes to beginners, Momentum and its neighboring businesses are a literal blank canvas. Artists looking to practice can pay for space in “Burner Alley,” a long stretch of wall behind the shop.

“The back of the shop is if they want to get something done quick,” Gubbins says. “But we have other walls that are sitting on businesses, we have walls in alleys. It’s all on how big they want to go and how much time they have.” 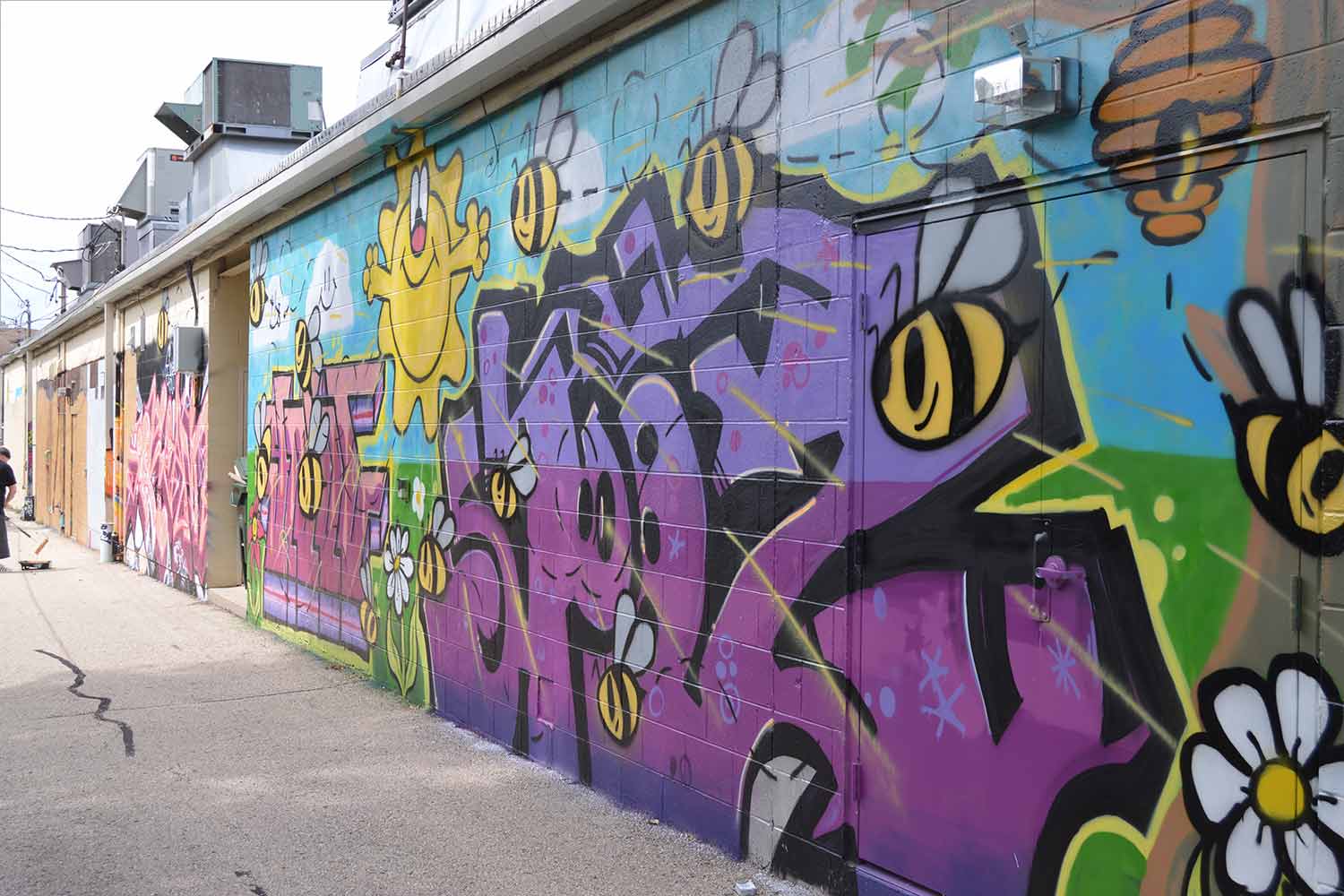 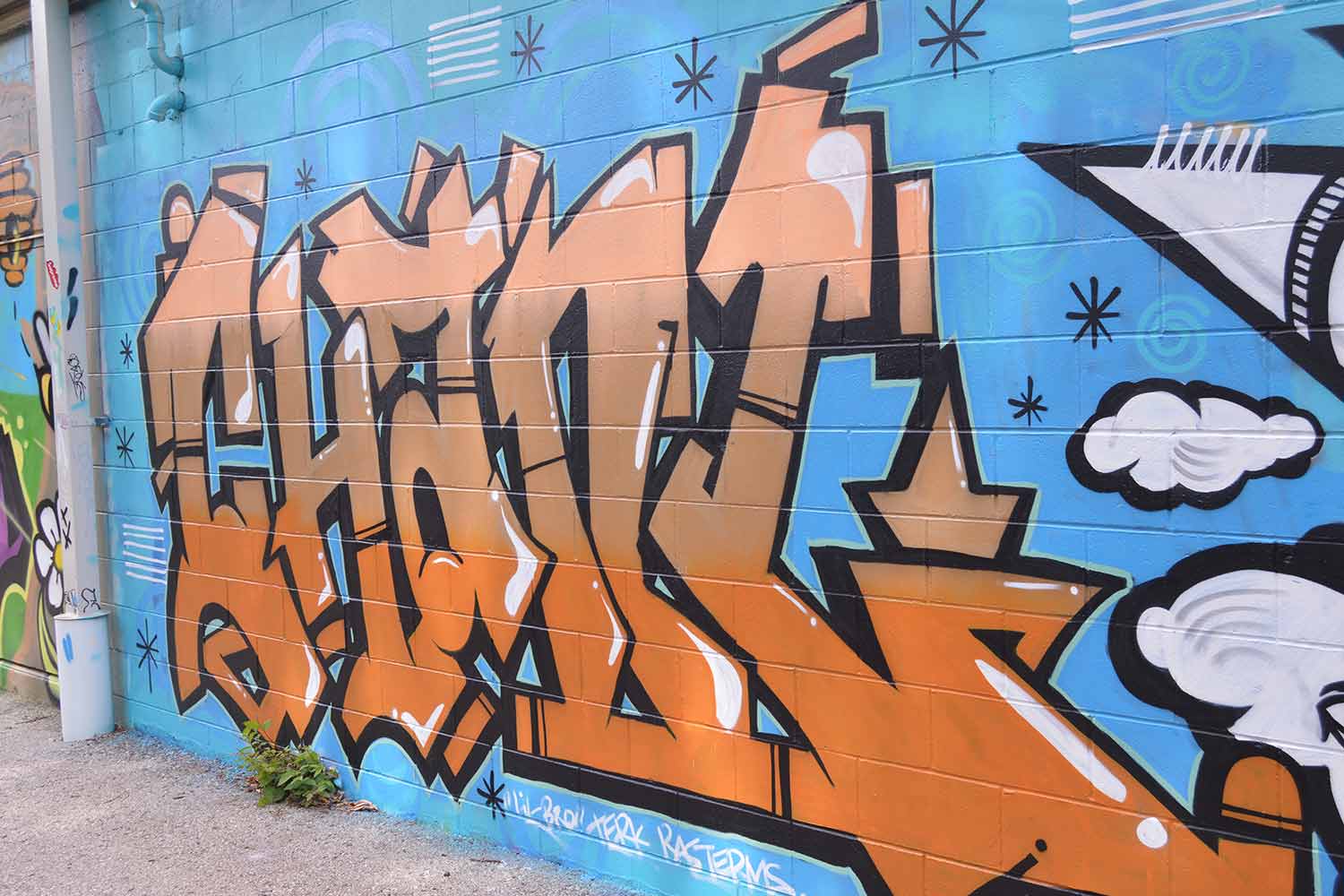 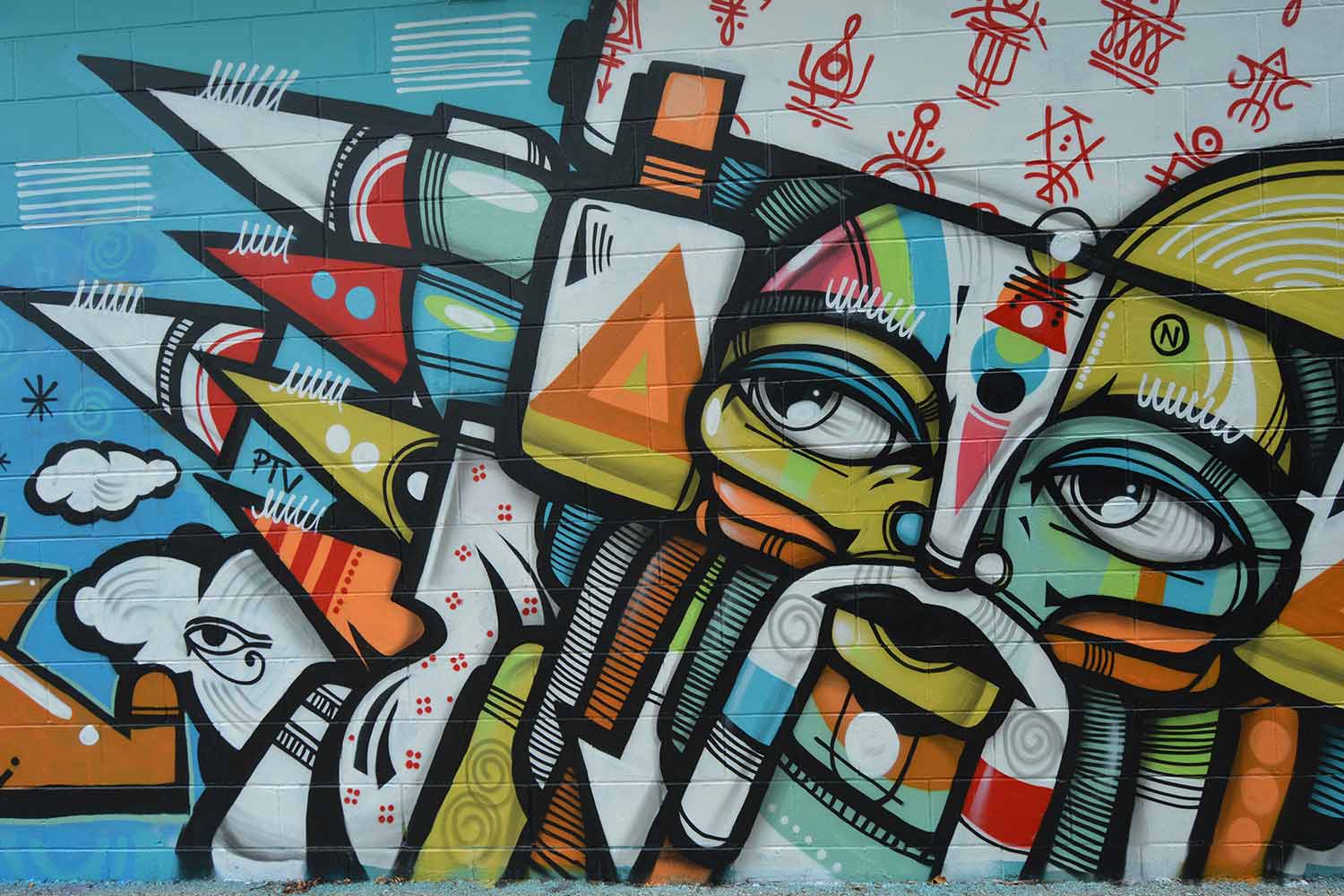 But the artists were always going to be an easier sell. Getting other businesses on board with his vision was a trickier task. Gubbins saw a mutually beneficial relationship: local artists would get paid for their work, and the art would enhance visibility for local businesses. In turn, a commission would help keep the Momentum store open without having to raise the price of paint.

“We understand artists don’t have money,” Gubbins told Isthmus in 2018. “We keep it as cheap as we can and still stay open.”

Though now Gubbins says most businesses will contact Momentum directly if they want a mural done, his early approach was fairly punk rock. “It was me hitting the pavement for a long time,” Gubbins says, “begging people to trust us that we were gonna do something artistic and not just tag something.”

Gubbins had to talk his own landlord into allowing him to paint the side of the shop. But soon after that first mural went up, property owners from around the area — including early clients Food Fight and Promega — started dropping by and inquiring about getting their own art from Momentum’s regulars. One of those originals, a building-sized mural across from Monona Grove High School, still stands today. 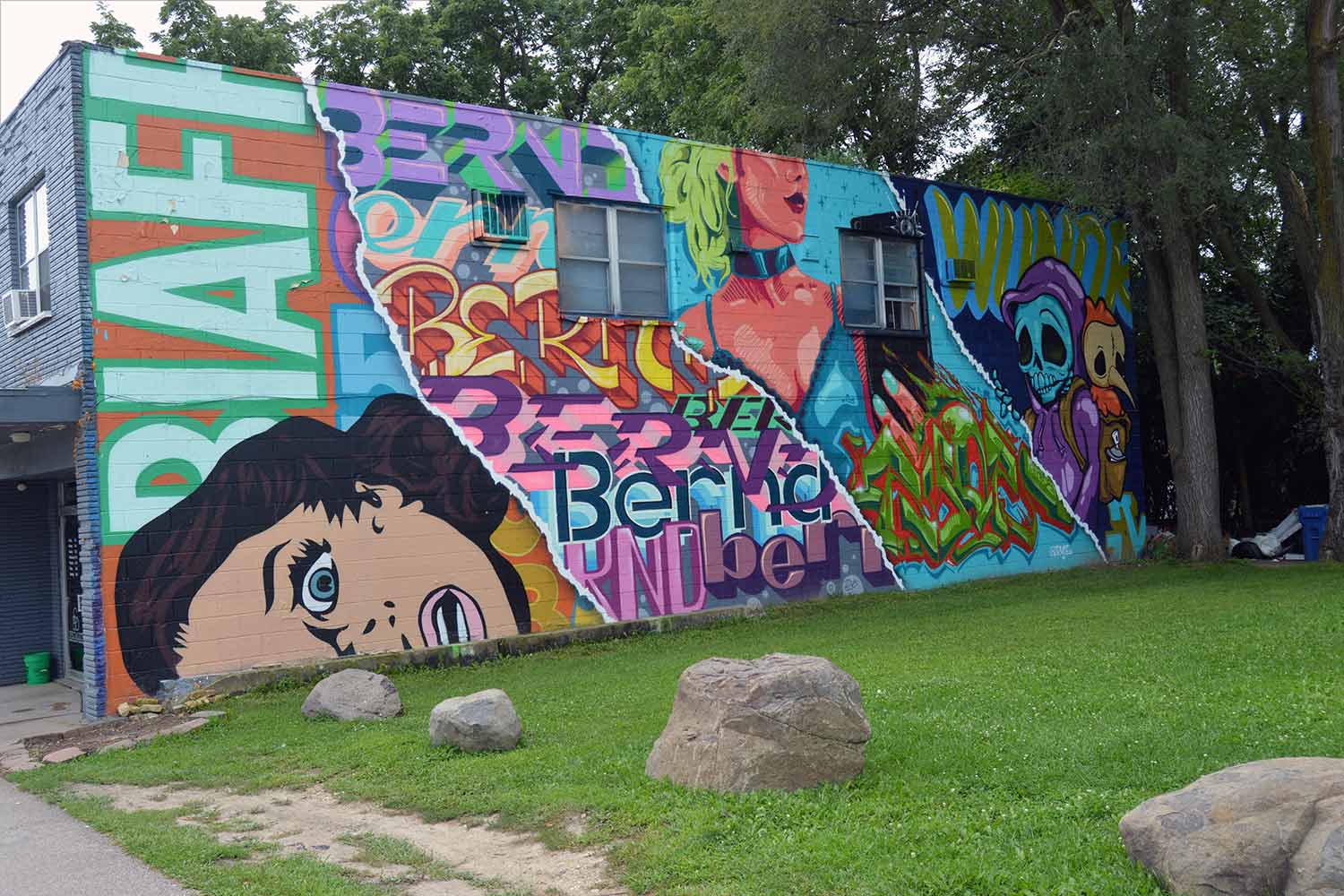 While there’s no doubt street art has exploded in popularity, it still remains in most cases an illegal pursuit. But with the Urban Arts Fest, Gubbins is hoping to change the conversation surrounding graffiti.

“I would urge anyone that is offended — or just doesn’t understand street art — to not only come out and look at the art, but to look at the artists,” he says. “They’re everyday people like you and me. They’re business owners, they’re parents, they’re taxpayers.”

Art is a matter of perspective. Whether in a museum or on the back of strip mall, Gubbins says it’s just about “finding your canvas.”

The Momentum Urban Arts Fest will start at 9 a.m. on Saturday, Aug. 24 at Momentum Art Tech. You can download a map of all the planned mural sites here. 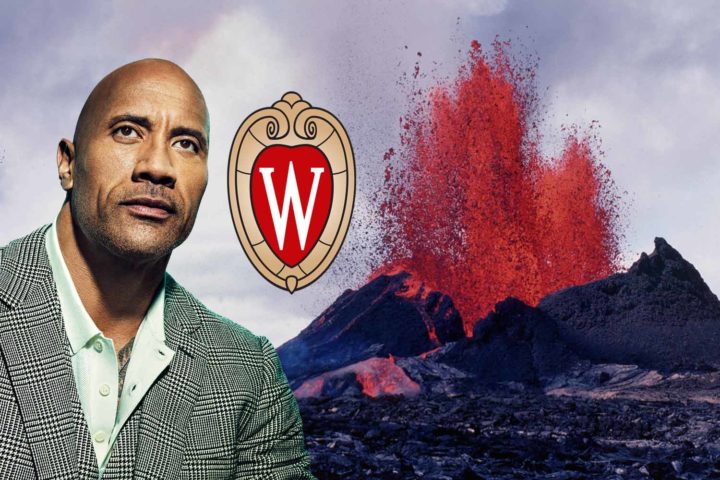