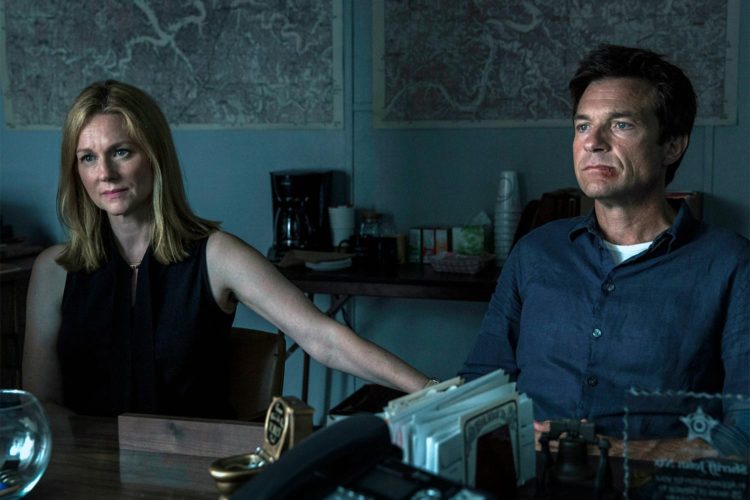 “And now the story of a wealthy family who lost everything, and the father who had to keep them all alive and in one piece by laundering money for a drug cartel. This is… Ozark.”

As with anything Jason Bateman shows up in, it’s hard not to draw parallels between whomever it is he’s playing and his iconic Arrested Development character, Michael Bluth. And on Ozark, Netflix’s riveting new drama series, Bateman plays what could be seen as an alternate-reality version of Michael. But while the Bluth family’s legal troubles were usually of the comic variety, the stakes on Ozark are much higher.

Bateman plays Marty Byrde, a wealthy Chicago financial adviser who launders money for a Mexican drug cartel. His cushy life is thrown into chaos when it’s discovered that his business partner has been skimming money from the cartel. So rather than end up in a vat of acid on the back of a truck somewhere, Marty makes a last-ditch effort (seriously, based almost entirely off a travel brochure) to keep his family alive, and the Byrdes pack up and head for the Ozarks.

In Missouri, Marty and his family struggle to adjust to life in a rural lake town. Marty postures himself as an angel investor, throwing the cartel’s money at local businesses in a frantic effort to wash it. He consistently runs afoul of several locals, which leads him to cross paths with Ruth Langmore (Julia Garner, playing one of TV’s best new characters), an ambitious and intelligent small-time criminal with a fluid set of allegiances.

Marty’s wife Wendy (Laura “Fucking” Linney) — an unfaithful depressive — feels lost and out of control, as the roiling stew made from her own indiscretions as well as Marty’s has led to this familial uprooting. Teenage daughter Charlotte (Sofia Hublitz) is restless from the move to the quiet town and yearns for Chicago. And son Jonah (Skylar Gaertner, who you may remember as young Matt Murdock on Daredevil) has a strange fascination with death and guns that only gets stranger in the quiet of their new locale. All the while, a dogged albeit seriously sociopathic FBI agent named Roy Petty (Jason Butler Harner) is getting ever closer to the Byrdes (and the Langmores), and he doesn’t care whose lives are destroyed in the process — even if it’s his.

Ozark has been compared by many critics to Breaking Bad, and that comparison is apt — it’s a narco-thriller that stars a beloved veteran of TV comedy in an uncharacteristically serious role. And Bateman rises to the occasion, delivering one of the best performances of his career and doing more with a look than many actors can do with pages of dialogue.

But Ozark has an unexpected weapon in its arsenal: deadpan humor. Bateman mastered this on Arrested Development, but the rest of the cast also possess innate abilities to break the show’s tension with dry, over-it quips.

While the show is predictable — if you’ve seen Breaking Bad, you can pretty much predict where each episode of Ozark is going to go — it’s a fun predictability. At this point, Marty is hardly Walter White, but to watch him make the choices he makes, you can easily draw a through-line and compare it to how Walt ended up. It makes for a fun way to kill a week’s worth of time between episodes of Game of Thrones. (Or Twin Peaks… or Rick and Morty…)

And if Missouri ever runs out of businesses to clean dirty money, don’t forget — there’s always money in the banana stand.