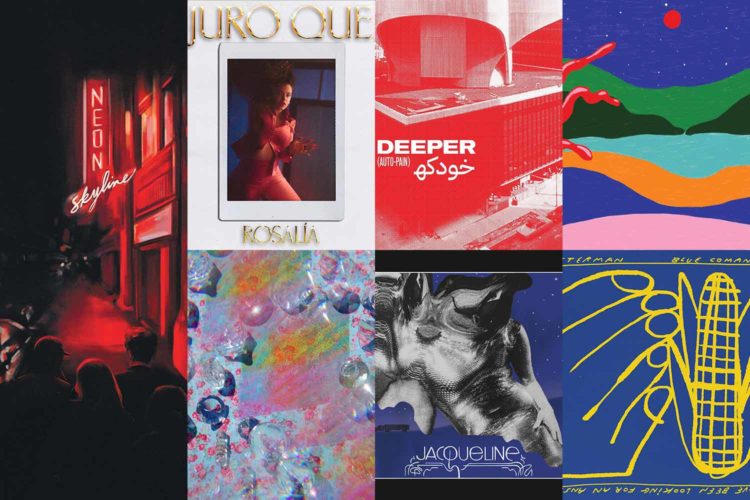 You may have noticed that there were even more amazing songs than usual this week. Or is it just me? No, really! Don’t get me wrong: the whole point of this column is that there are always great new songs, and the trick sometimes is just a matter of finding them. But this week I was pleasantly shocked by how much goodness there was to pick from. Enjoy this one! (I hope this doesn’t get balanced out by a bunch of clunkers in early February.)

The whole of Andy Shauf’s new concept album The Neon Skyline is so dramatically charming and interwoven that it’s hard for me to select a particular song to feature here. That said, “Living Room” provides a beautiful glimpse into one of 2020’s early Album of the Year contenders. The Neon Skyline builds a narrative arc out of 11 crystalline vignettes with lyrics that read like something from McSweeney’s. It’s a premise that would be overbearing if Shauf wasn’t such a delicately crafty songwriter.

After a 2019 spent predominantly releasing chart-topping radio-friendly singles, “Juro Que” sees Rosalía return to the murkier hybrid flamenco-electronic territory of El Mal Querer. Complete with the high-caliber video production we’ve now come to expect from every song this woman has released, it’s the sort of performance that could make a crowd turn immediately attentive and totally silent. And shouts to the English subtitles in this short film of a visual, which are a subtle but powerful difference from the El Mal Querer videos. “Juro Que,” an ode to an incarcerated lover, feels all too brief considering its quality. But its sonic return to the feel of Rosalía’s 2018 material has me hoping for another great year of more experimental output from her.

One of Chicago’s best and coolest bands, Deeper has announced that their second album, Auto-Pain, will arrive March 26 via Fire Talk Records. This is great news for fans of the post-punk and new wave guitar-forward works of bands like Omni and The Hecks. It’s been years since I was first charmed, and they have kept getting better. “This Heat” joins late 2019 single “Run” on the Auto-Pain tracklist. An aside for fans of Chicago architecture: the album art features the demolished Prentice Women’s Hospital. And this follows the band’s use of a Rush University Medical Center shot on the “Run” single cover. Though I haven’t seen the band say anything about it, it can’t be a coincidence. It’ll be interesting to see if they continue to use hospital imagery on future releases.

I’ve been thinking a lot lately about how it’s becoming clearer each month that the enduring spirit of turn-of-the-millennium radio pop is overtaking indie. I mention this now in order to admit that maybe this means it’s my fault that my first reaction to the chorus of “Night Terrors” was that it sounds like the verses of “Soak Up the Sun.” Still, I hope this isn’t a comparison Diet Cig would balk at. The duo has long been one of my favorite active pop punk bands, and Alex Luciano’s melody-forward songwriting is every bit as arresting and listenable as this late-era Sheryl Crow banger.

If you’re familiar with both Four Tet and Ellie Goulding, you might at first be surprised to hear of their teaming on “Baby.” Goulding and Four Tet’s Kieran Hebden are predominantly known for work occupying pretty disparate subgenres of electronic music — her celebrity originated from big hits in early 2010s EDM, while he represents a more subdued kind of organic house which is often used by NPR as bumper music. On this second single from the forthcoming Four Tet album Sixteen Oceans, though, the combination totally works: a fractured vocal sample from Goulding skitters across production which is both refreshingly new yet still immediately recognizable as a Four Tet song.

Chicago’s Haley Fohr is probably best known for her billowing, tremendous work under the name Circuit des Yeux, but she’s also released music under another persona, as the western-tinged Jackie Lynn. “Casino Queen” is the first taste from the second Jackie Lynn album, Jacqueline, and it’s a great and menacing foretelling of the album to come. On Jacqueline, Fohr will once again pair up with the entirety of the psychedelic electronic band Bitchin Bajas as her house band. With the Bajas’ busy bleep-bloops and Haley’s sonorous alto, it’s a sizzling, sly number that toes the lines of camp and mystique.

Right off the bat, I’m going to level with you: I first heard this song in an Instagram ad. A brief sampling led me to look it up. Who was Westerman? I had to know! Well, this Londoner has released a handful of tracks (perhaps most notably the also-great “Confirmation”) and he’s just signed with Partisan Records. The subtle baritone vocals on display in “Blue Comanche” bring to mind the work of Devon Walsh or Arthur Russell, but its ’80s production overtones cast a subtle tightness which makes the song feel like it’d fit well in a straight-faced film montage accompanying footage of a lonely trek home. (Or perhaps a lonely trek through Instagram Stories.)