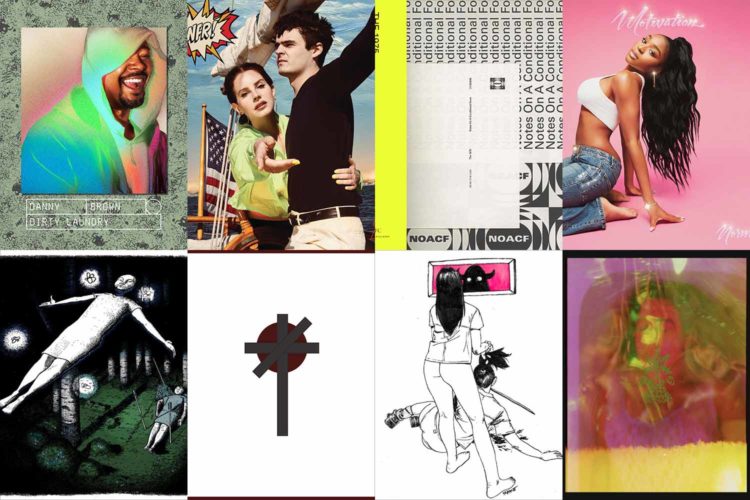 Climate change might be dealing Riot Fest a gentle hand this year by delivering summery temps well into September, but I can’t say that the fest doesn’t deserve it. The lineup is packed with great bands of all popularity levels, and there’s still a lot of names I don’t recognize. I know I should be doing some nimble googling to prepare my itinerary, but the problem is that there are so many other terrific things to be listening to this fall!

That’s one good thing about aging: this is the kind of back-to-school season procrastination problem I’ve been dealing with. For the punks, students, teachers and others among you, here’s eight new songs that have brightened my past few weeks.

Danny Brown’s 2016 record Atrocity Exhibition was a sleeper masterpiece. At the height of his career he released his weirdest album ever, pulling in hip hop producers from all directions to frame and propel his twisted raps. For his upcoming fourth record, uknowhatimsayin¿, Brown will build on the curatorial producer selection of his oeuvre in a new way. This time, he’s giving all of the album’s production responsibilities to one individual: A Tribe Called Quest’s Q-Tip, who’s among the most celebrated hip hop producers of all time.

On lead single “Dirty Laundry,” we hear the first peek at this pairing. Between Q-Tip’s sampler virtuosity, a piping synth line, and Danny Brown’s highlight reel of depravities, it sure seems like we’re in store for another classic full-length. For a rapper with such a characteristic goofiness (which itself belies the well-established current of struggles and darkness informing his storytelling), Brown always comes off as incredibly intelligent. uknowhatimsayin¿ is out Oct. 4 on the legendary left-field electronic label Warp Records.

The musical highlight of my August 2019 arrived on its penultimate day, as I first heard Norman Fucking Rockwell! and spent an hour gasping at it all. I’m fresh off a year enriched by a strong Fiona Apple phase, so the record and particularly its piano-rich tracks (such as this) was perfectly suited to the present moment for me. As you probably can attest, though, I’ve been thoroughly informed that it’s not just me; the record really is that good.

Above all else, “People” is noteworthy for being the most nu-metal single I’ve seen come from a contemporary band this popular. (No, the new Tool album doesn’t count.) Hell, the early ’90s have been “in” so long that it was only a matter of time until the aesthetics and sounds of the pop-reactive nu-metal of the late ’90s showed up to the party. But if anyone could try it to make it work, it’d be The 1975 — a band with immense profile but also a propensity to make music that eschews notions of taste and self-seriousness.

By this point in September, I doubt most people haven’t heard “Motivation.” That said, this paragraph isn’t for most people. To everyone else, picture me placing my hand on your shoulder as I gently inform you that you’ve missed the capital-E entrance of a new pop celebrity. She’s one of the harmonies that made up Fifth Harmony, aka the person thousands of Ariana concertgoers posted to their IGs this year with the caption “Who is this random opener lol.” Normani, duh!

“Mono No Aware” is the lead single from Great Grandpa’s sophomore effort, Four of Arrows, out Oct. 25. A large step forward in emotion and sonic depth from their ’90s-obsessed earlier material, “Mono No Aware” announces a new era in the young band’s catalog. The little production flourishes with the guitars and vocals do a lot for me, too.

I don’t tend to dip into metal in Pop Gazing, but I’ll make my case here. Brooklyn band Liturgy released the second most popular black metal record of the last decade, 2011’s Aesthetica. The album ruffled a lot of genre purists’ feathers, and Liturgy went on to ruffle further when they dove into the deep end’s deep end with their follow-up, The Ark Work. Last week we got a taste of their upcoming fourth album, and it sounds like black metal with marimba cut up into the shape of a Palm song. I love it, and I think you will too, even if you don’t care about metal.

A lot of unflattering soundbites has so far been the main export of Grimes’ and tech billionaire Elon Musk’s romantic coupling. But I’ve been holding onto hope his money could, at the very least, fund a weird, high-budget, no rules follow-up to 2015’s Art Angels. Her latest single, “Violence,” might be her best song in years. It’s a pretty sick deep house return to the Grimes we know from the early 2010s. In this era of increased accountability and criticism of hoarded wealth, the Grimes question may be: Are we willing to “separate the art from the artist” if the artists’ crime is saying dopey things about her billionaire boyfriend?.

Mura Masa feat. Clairo: “I Don’t Think I Can Do This Again”

Clairo has gotten no shortage of press this year, but 23-year-old British producer Mura Masa has continued to fly under most radars while remaining a headliner to the audiences of his post-EDM electronic niche. “I Don’t Think I Can Do This Again” doesn’t reach the dizzying heights of his 2017 Charli XCX collab “One Night,” but it succeeds in reaching for new places: an amalgam of organic glitch, deep house and somber big beat.