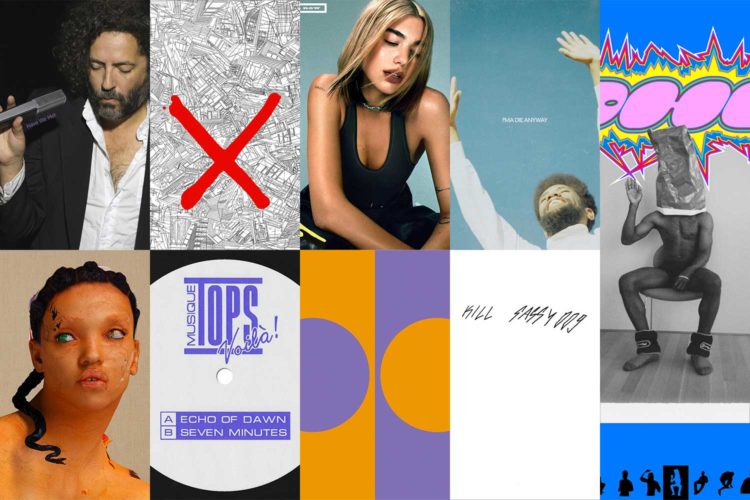 Listening through the massive new Burial 2010s retrospective last week, I was struck with an unfortunate truth: my headphones are trash and need replacing immediately. They’re fine for listening to New Yorkers chat into expensive microphones, but consider this a holiday shopping PSA. If you primarily listen to music through $20 headphones, you’re worth the investment. (And there’s no way you can give “Kindred” the proper vibe-out it deserves without the proper hardware.)

I’ll check in when I’ve made good on that advice. In the meantime here are my favorite tracks released since my last update.

Destroyer’s Dan Bejar doesn’t swing his microphone around him between verses like a mulleted screecher, or lean forward and clasp it with both hands as it cowers in its stand. Instead the former New Pornographer holds his microphone upright, like a scientific instrument, a lit cigar, or (most aptly) a glass of red. This has long been the characteristic Destroyer poses on stage and in videos, and I’m so pleased to see that it’ll now be enshrined on the album cover of Have We Met, his forthcoming January 2020 release. On “Crimson Tide,” we hear Bejar as half-interested as ever, calling bluffs and shrugging off the world around him. The dryness of these remarks are undercut by a propulsive electronic backing, set somewhere between that of his hesitant “Poor in Love” and the driving “Tinseltown Swimming in Blood.” It’s a groover.

I was unsure what to expect when I heard British songwriter Richard Dawson was releasing a follow-up to 2017’s Peasant, an underrated masterpiece of a concept album set in the early Middle Ages. This fall, Dawson jumped into the future with 2020, an album largely addressing the sorry state of work and life under late capitalism. Its lead track “Civil Servant” is the one I’ve played the most for people this fall, waiting patiently to ask, “So… what do you think!?” In an elaboration of the iconic blink-182 truism “work sucks, I know,” we hear Dawson sing of the grief and shame of working an awful job. Guitar crunches and grinds as we learn of a worker’s obligation to carry out austerity measures: “In the staff room, lost in a daze, shoveling crisps into my face / after an unspeakably awful call with a grieving mother.”

If Dula Peep has offered anything that matched her perfectly-timed breakthrough single “New Rules,” I haven’t heard it. And it’s not for lack of trying; I’ve enjoyed a lot of what I’ve heard, but it wasn’t until the maximalist club track “Don’t Start Now” that I got that same kick out of the English singer’s music. “Don’t Start Now” has it all: a souped-up string sample, a rhythmic ’90s house chord progression, and the perspective of a narrator determined to leave heartbreak behind.

CRASHprez dropped this Adam Yafai-directed video for “THE NERVE!” — the standout opening track from his densely packed EP I’ma Die Anyway — just as I was polishing off this post. The nerve, indeed! Produced by Madison’s knowsthetime (who provides a shimmering, glitched-out drone as a backdrop to Michael Penn II’s gold bars), the track earns its ostentatious caps lock by virtue of its honesty: both in regard to Penn’s sexuality and his being one of the best out there.

The overcast “DHL” is a panoramic vista. Released in tandem with his queer club night PrEP+, it’s Frank’s first solo material since 2017, back when he was still reverberating off of a certifiably tremendous 2016. The song gives a listener all kinds of space to explore. Both confident and murky, it’s a psychedelic flex track dripped in Houston shadow. It’s also more of a rap track than many of the songs that have built up his landmark solo albums. This is midnight drive music, primed not for karaoke but for repeat listens.

It takes about five seconds of “sad day” to conjure Kate Bush. (Is it that she says the word “window”?) But each five seconds brings additional nods to the “Running Up That Hill” singer, and by the time FKA twigs reaches the first chorus the song crystallizes as a sure homage to the truest icon of fairytale pop. Despite these parallels, there’s no question that “sad day” belongs deeply to its creator and her striking oeuvre. Co-written and co-produced by teams including Nicolas Jaar and songwriting star Benny Blanco, the track extends like an outstretched arm as her pleas for a lover in a strained relationship feel increasingly hopeless. A strong track on a strong album (one of several, on both accounts), “sad day” is a career highlight.

For a band whose identity has always seemed inextricably tied to being careful and methodical, TOPS on “Seven Minutes” sounds downright unhinged. Of course, this is relative — don’t expect a mosh pit if you catch them on tour in April. But each time I hear this song I can’t help but smile as I imagine them in the studio, trying something new, dropping into this take like a halfpipe after pulling an encouraging card from their Oblique Strategies box.

Caribou: “You and I”

In my mind, the arrival of a new Caribou song inherently warrants celebration — even when it’s a four-minute straight-forward tune and not an extended odyssey. After some time away from the Caribou moniker, Dan Snaith returned this year with more Caribou to stir up buzz for his February 2020 full-length Suddenly. And despite the shorter runtime, “You and I” lives up to my excitement. After “You and I” begins with synth notes that twinkle like coins hitting water as Snaith coos, a drum fill grabs onto the track and throws it into half time. The song steps over this line and back until a whistling guitar solo noodles in, ushering the listener quickly into whatever goodness awaits us in the album’s next track.

I first encountered SASSY 009 on accident at last year’s SXSW, when the Norwegian trio were sandwiched between artists I meant to check out. They ended up being one of my standout favorites from 2018’s Austin trip, but I never did hear much more about them. This year they popped up again in indie press with the news that the trio had become a solo act and said solo act was releasing new music. The menacing techno track “Maybe in the Summer” is my favorite of Sunniva Lindgård’s new material, although it’s neck and neck with her fresh Clairo collab “Lara.”