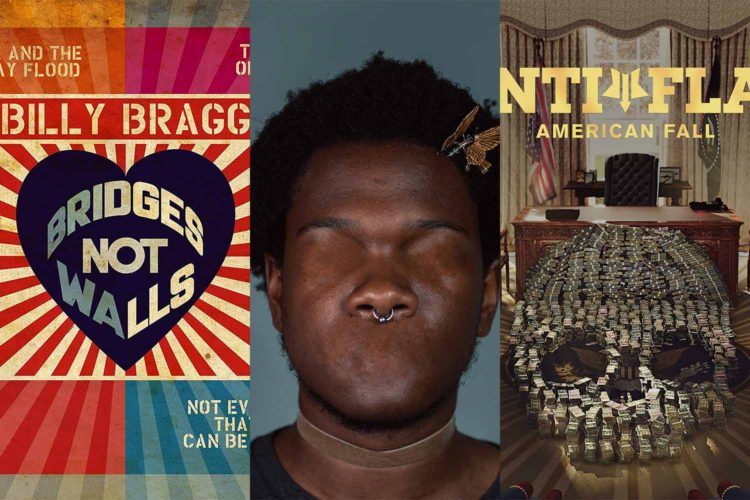 Folk punk musician Billy Bragg has spent more than three decades using his art to fight for a cause. His latest, Bridges Not Walls, does that right at the get-go with its title. A tireless ally, Bragg has doggedly campaigned against racism, sexism and facism for his entire career. His new mini album’s first single (“Saffiyah Smiles”) is about an incident last April in Britain where a young woman named Saffiyah Khan stood up to defend another against angry, near-violent protesters, and she faced them with a smile. Bragg immortalized Saffiyah in a relaxed, rootsy tune that mentions Hitler’s haircut and likens politicians to Elmer Fudd, but all that hate dissolves with one simple, calm expression. Bragg’s songs and themes of peace continue to resonate in his home and in ours. —JM

With his first full-length release, the genre-bending musician known as Shamir announced his presence to the world with a neon bullhorn. Jumping between disco pop to soulful R&B to electronic noodling, the young artist reverberated out into the sullen indie music world and stuck out like a sore thumb. On his sophomore effort Revelations, Shamir is more subdued, albeit not at the expense of his personality. The 22-year-old crafted his new material around a new definition of America, and Revelations is the musician reacting to the uncertainty of the times, which weigh heavy on the shoulders of many — especially those who feel marginalized. The ballad “Straight Boy” is an honest reflection on his experience as a nonbinary-identifying individual, and “90’s Kids” talks about the plight of a generation labelled entitled but expected to carry the world. Don’t chalk Shamir’s soul-searching up as simple maturation, however. Although young, he’s an artist who has made a conscious decision to take his work in this direction. He believes that this is where it belongs right now. Shamir plays Chicago’s Subterranean on Dec. 5. —JM

In keeping with the theme of this #NMF, you can’t talk about politically conscious music without talking about Anti-Flag. Though the band has existed in some form since the late 1980s, the prolific Pittsburgh punx really hit their stride during the second Bush administration, honing down their sneering, anti-imperialist ethos into expertly-crafted, breakneck punk rock. But on American Fall, Anti-Flag doesn’t so much go after Donald Trump as they do what caused him. “Trump is a symptom, not a disease,” said singer and guitarist Justin Sane in a recent interview with the Pittsburgh Post-Gazette. “It’s far more about us collectively combatting the disease than the symptoms.” The result is an album that directs its rage at the darker facets of modern America, from ingrained racism (“Racists”) to political distraction (“American Attraction”). American Fall may not reinvent the wheel, but it does provide a cathartic new direction for it to roll. Anti-Flag plays Chicago’s Bottom Lounge on Jan. 17. —TW