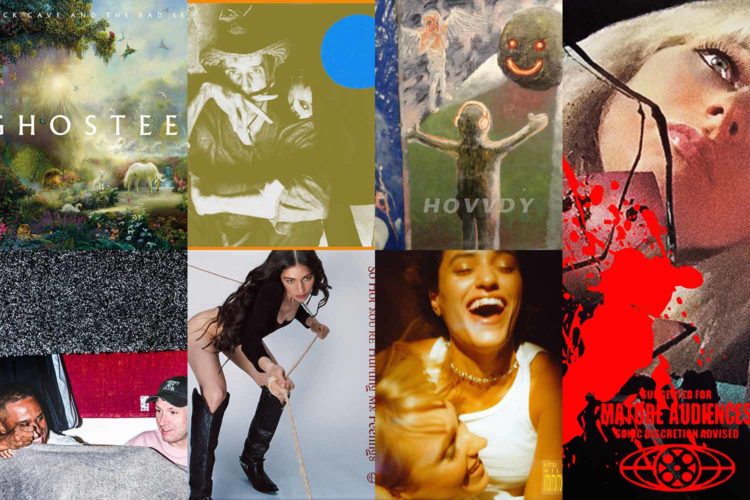 I have far too many things to say about the ’10s decade-spanning Best Of lists published last week by Pitchfork to share any of them here. How could I pick a specific gripe? That’s like… narrowing down every song released in 10 years to a list of the 200 best ones! But I will say that while it’s been fun to poke at the obvious mistakes in it — “Party Rock Anthem,” but no Age of Adz? — it’s also been great to be reminded about all the incredible music released just long ago enough that I don’t think of it too often.

We end each year with reflections on our collective favorite releases. Just as good as these (and sometimes better) are the almost-favorites: really good music which earns a spot among the ranks of other just as excellent but slightly less remembered tracks. This edition of Pop Gazing goes out to the real winners: numbers 201-1,000 of the best songs and albums of the decade.

I’ve only heard it once so far, but it’s easy to immediately identify Nick Cave and the Bad Seeds’ lush and affecting Ghosteen as an essential listen. Like choosing a scene from a feature film to represent the whole, it’s difficult to select one highlight from the record. However, my mind goes to its 15-minute long finale. “Hollywood” uses allegory and literary reference to explore and meditate on death. It’s a topic well at home in Cave’s oeuvre but particularly personal and harrowing in the wake of his teenage son’s death. This is no easy listen, but it is a beautiful one.

I’ve already used this column to address the dream collab come-to-life of Welsh songwriter Cate Le Bon and Deerhunter when she produced their latest full-length earlier this year. And the well of that greatness hasn’t run dry yet! At Mexican Summer’s Marfa Myths festival this spring, the two wrote and recorded an EP called Myths 004, and it’s finally coming out on Nov. 1. “Secretary” is a Cate-driven affair and plays like something of a bonus track to her excellent 2019 album Reward.

TNGHT’s catalog is less than 10 songs, but their sparse, elemental club tracks are hugely influential. After six years of silence since writing the 2010s’ electro playbook with their self-titled EP, the duo of producers Lunice and Hudson Mohawke are back with their first single since they disbanded in 2013. For more new TNGHT, check out their new mix for the iconic BBC Radio 1 Essential Mix program.

Once I got past trying to remember if the title was a Flight of the Conchords lyric (I checked, it’s not), “So Hot You’re Hurting My Feelings” emerged as an earworm of a toe-tapper. Other singles from Polachek’s debut solo album PANG have been more immediate, but this one has crept up in a pleasing and rewarding way. The mid-tempo lament on a long-distance love got the music video treatment recently, with a fitting visual of Polachek doing a shuffle in what appears to be a paperback cover’s depiction of Hell.

I’ve lost count of the number of absolute bangers Empress Of has provided us with. What is this, perhaps number 20? But each new classic comes half as a surprise and half as an assurance that one of dance pop’s best musicians has still got it. The production on “Wild Girl” shivers and careens over a determined house beat. I’m not the first to note that its chorus recalls Jennifer Paige’s “Crush,” but the fact that that song was most recently stirred out of the collective subconscious by Jai Paul in a cover from his leaked album feels particularly apropos here.

When a song has a name like “You’re No Good,” you know there’s always gonna be a catch. Indeed, on this cut from Closer to Grey — the first new Chromatics album since 2012’s sublime Kill for Love — we hear “I know you’re no good,” followed by “but I can’t stay away from you.” Next comes “that’s all we ever do,” and those are the lyrics for most of the track. You’d likely never notice this simplicity, though. “You’re No Good” and the rest of Closer to Grey succeeds in what this band has long excelled at: establishing a perfect sonic and visual aesthetic and letting this guide the path forward. It’s a dancefloor meditation.