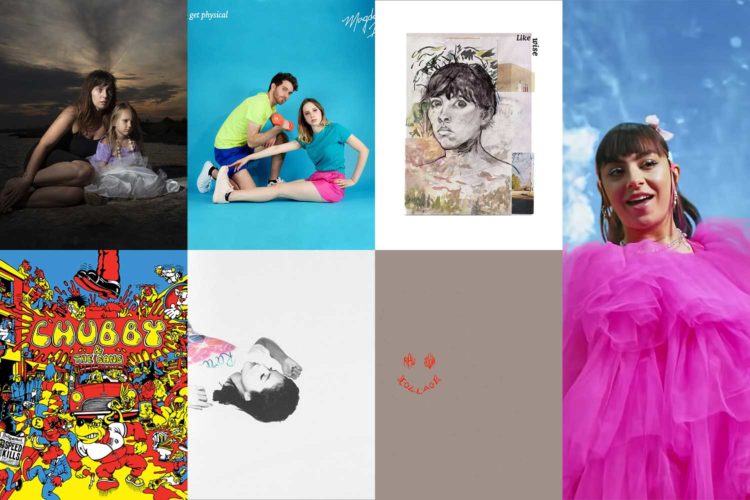 I’m happy to report that I did indeed get my first halfway decent set of headphones in the final days of the decade, and they really are a game changer. From this point on, my research for this column will be imbued with the clarity of having truly heard the latest pop releases. Things at Pop Gazing HQ are shaping up. I’ve tossed out my old cassette archive. I’ve got my research assistants working tirelessly to download all of my favorite songs in FLAC. That’s right: thanks to upgraded hardware, I’m now conducting my pop gazing with a more careful ear than ever before. Unfortunately, all this just makes “Yummy” sound even worse than it already did.

For me, this week is all about the return of one of my favorite bands. On Monday, U.S. Girls began the rollout for their next album, Heavy Light, which will gloriously be released March 6 on 4AD. And why should you trust me — an absolute fool for Meg Remy & Co. — to give you an objective view of this band’s music? Perhaps you shouldn’t, but “Overtime” speaks for itself. In the time it takes to gasp, the track launches into a tale of childhood betrayal and deception, and the song continues swiftly from there as the legendarily populous band (20 people played live in its recording) douse the narrative in disco-pop texture. It’s gonna be another good record, I’m happy to say. U.S. Girls will play the Majestic Theatre on April 6.

Magdalena Bay: “How to Get Physical”

If you’re new to L.A. duo Magdalena Bay, I highly recommend doing some catching up on the Luminelle signees’ fairly deep catalog of DIY-glam music videos. One of the many bops available on the band’s YouTube page, “How to Get Physical” is the newest. It’s a head-turner — deceptively simple and delightfully catchy.

Hop Along’s Frances Quinlan had already released two singles from her solo album Likewise, but my favorite so far is the latest, “Your Reply.” The song plays intricately, like a trio for piano, guitar and voice in a way charmingly evocative of turn-of-the-century twee pop (think peppy Belle & Sebastian, like “Me and The Major”). Still, the highlight is Quinlan’s voice, which features the quality we’ve come to expect from Hop Along along with the measured songwriting influence of Neko Case and Joni Mitchell.

Chubby and the Gang: “Pariah Radio”

Out this week, Chubby and the Gang’s debut album Speed Kills sees the Londoners absolutely crash through 20 minutes of moshpit-inciting melodic punk. Even hearing these songs stream from their Bandcamp page has me feeling short of breath! There’s not a bad track among them, but if you only have time for one song, start with “Pariah Radio.” Just don’t blame me if you accidentally listen to the rest of the record in a daze ’cause you can’t turn it off.

Selena Gomez’s Rare, arguably the first pop album by a bonafide celebrity this decade, has arrived. While it’s nothing earth-shattering, it does pass the rigorous album quality test I’ve perfected after years for grading A-list pop stars on a scale: “Is this a colossal letdown or are most songs pretty good?” One of the immediate standouts is the second track, the inevitable hit single “Dance Again.” Created in partnership with songwriting titans including Mattman & Robin (“Run Away with Me,” “Hands to Myself”) and Caroline Ailin (“New Rules”), its post-breakup “look at me now” triumph is thematically on par with the album’s thesis. For me, the key appeal of this track traces back to its live-sounding bass guitar line.

It’s a great week to be a fan of London’s Georgia, whose indie dance ascent has seemingly been kicked into motion after a 2019 largely focused on her banger “About Work the Dancefloor.” (Not that “Dancefloor,” my No. 20 fave song from last year, wasn’t worth spending a year grooving to.) To complement her promising debut full-length Seeking Thrills, which dropped on Jan. 10), triple threat Georgia Barnes (singer/songwriter/producer) provides guest vocals on Mura Masa’s latest single “Live Like We’re Dancing.” R.Y.C., the forthcoming second album from the buzzy English producer, has big shoes to fill. Mura Masa’s self-titled debut was my favorite jukebox-style dance album since its spiritual predecessor, Disclosure’s Settle.

Galantis feat. Charli XCX: “We Are Born to Play”

Will the soundtrack to this commercial for Universal Studios Japan’s Super Nintendo World enter the pantheon of oddball marketing that ended up as a standalone hit? Seems like a bit of a stretch, but as fans of a Carly Rae Jepsen song originally released in the Canadian animated dance movie Leap! could tell you, stranger things have happened.