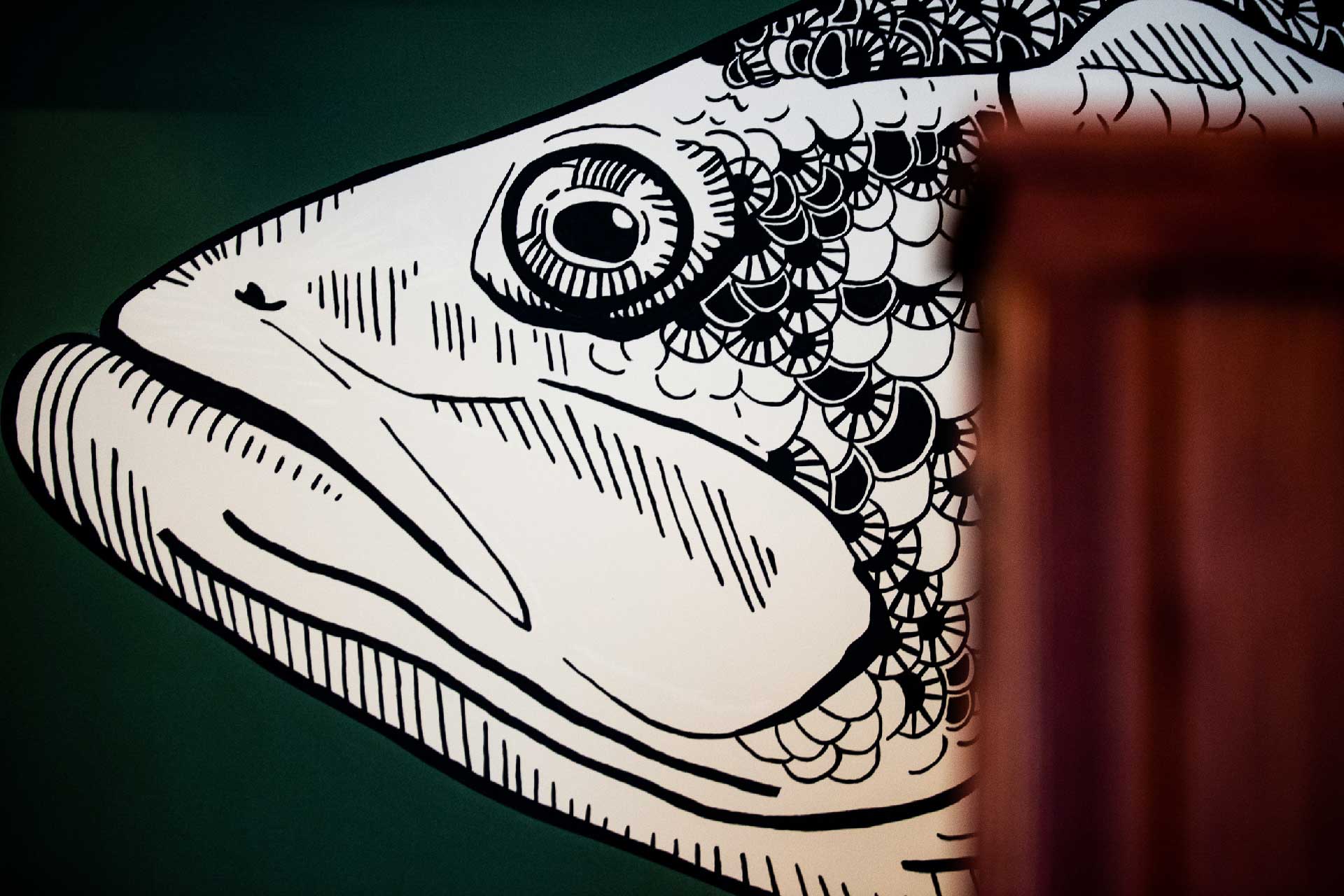 Any new business venture comes with risk. Add in the uncertainty surrounding the coronavirus pandemic and, well, opening a bar isn’t an easy thing to forecast right now. Even for two experienced business partners and friends like Sean Pharr and Chad Vogel.

The duo’s newest venture, The Muskellounge and Sporting Club — aka “The Muskie” and named in honor of the state fish — opened July 21. It’s located in the Lake Edge Shopping Center on Monona Drive.

“The days that we’ve had ideal weather have been very good,” Pharr says. “I think because we’ve done such a slow, quiet opening, the neighborhood is getting to know that we’re here.”

He adds: “I know that we’ve been highly anticipated in the area and it’s just a matter of people coming in and checking us out.”

With local COVID-19 restrictions still in place, The Muskie can’t have customers inside. Presently, patrons order at a station near the front overhead door and drinks are delivered to patio tables. Outdoor capacity is 46 after they received permission to use the area in front of neighbor Gigi’s Playhouse for expanded patio seating. The patio is also dog-friendly.

Once customers are allowed back inside, Vogel says their indoor capacity is 80-85. “But we were always kind of under the assumption people would be up and playing games and doing stuff like that,” he says. 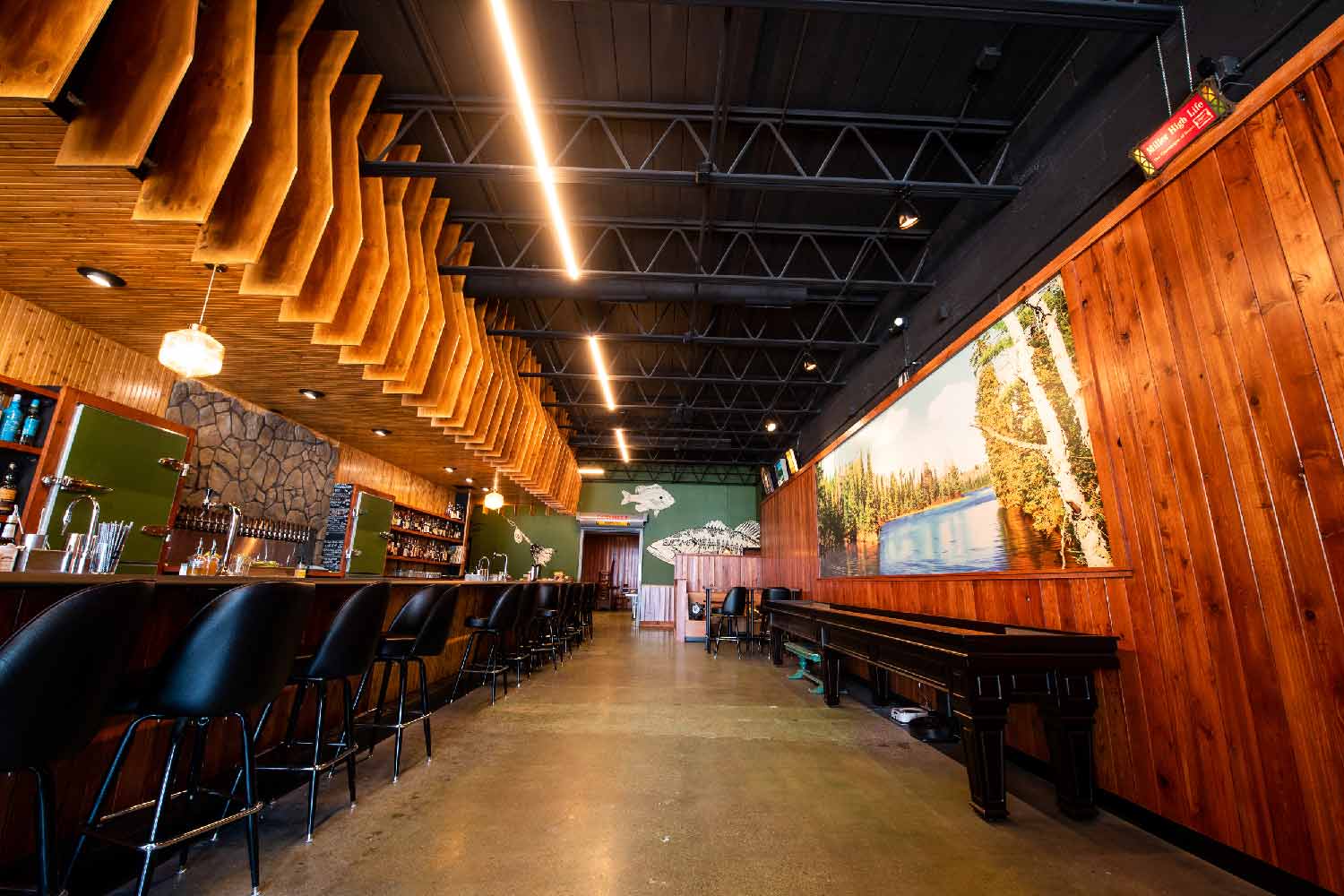 Pharr and Vogel are co-owners of Mint Mark along with Gwen and Kyle Johnson (Johnson Public House), and Vogel also owns The Robin Room, which is currently closed.

Last year, the owner of the shopping center approached Vogel about a bar concept for the space that formerly housed Elie’s Family Restaurant. Vogel and Pharr bonded over shuffleboard when they lived in Stevens Point and decided to create a space that was a “tribute to parlor games.” 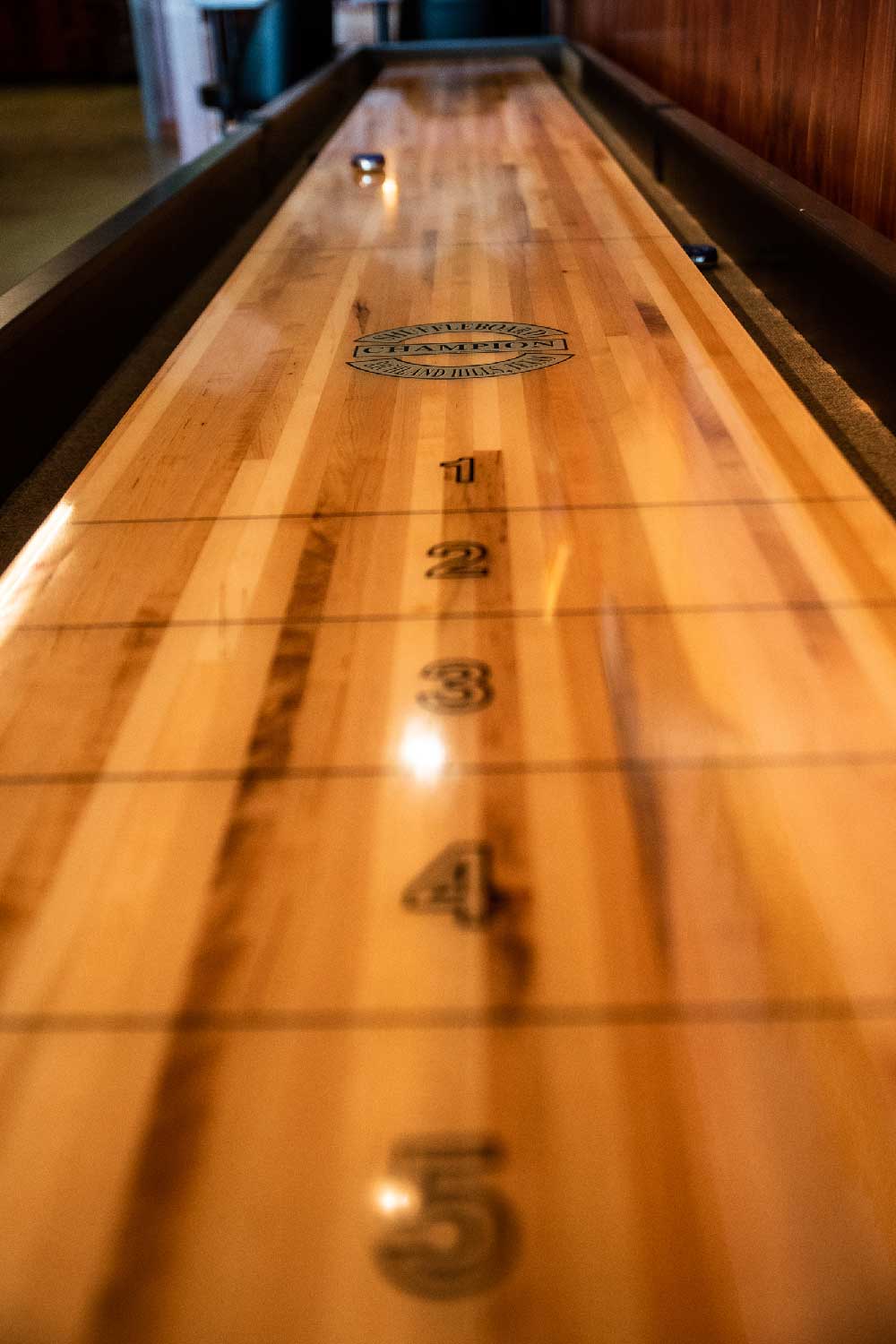 A ping-pong table and dart board inhabit the back game room; they’re still waiting on the foosball tables to arrive. There’s a deluxe Big Buck Hunter Reloaded video game cabinet, too, but the shuffleboard table gets the prime real estate. It sits along the wall opposite the main bar beneath a breathtaking lake vista wall mural.

The bar will also have pull tabs, and they’re working on converting an old pull-handle cigarette dispenser into a fishing lure dispenser. (The name of the dispenser? “The Worm Firm: Your Firm for Worms.”) The plan is to feature local fly fishing tiers and other out-of-state makers. Pharr is an avid fisherman and wants slots for employees’ recommendations, whether into fishing or not. 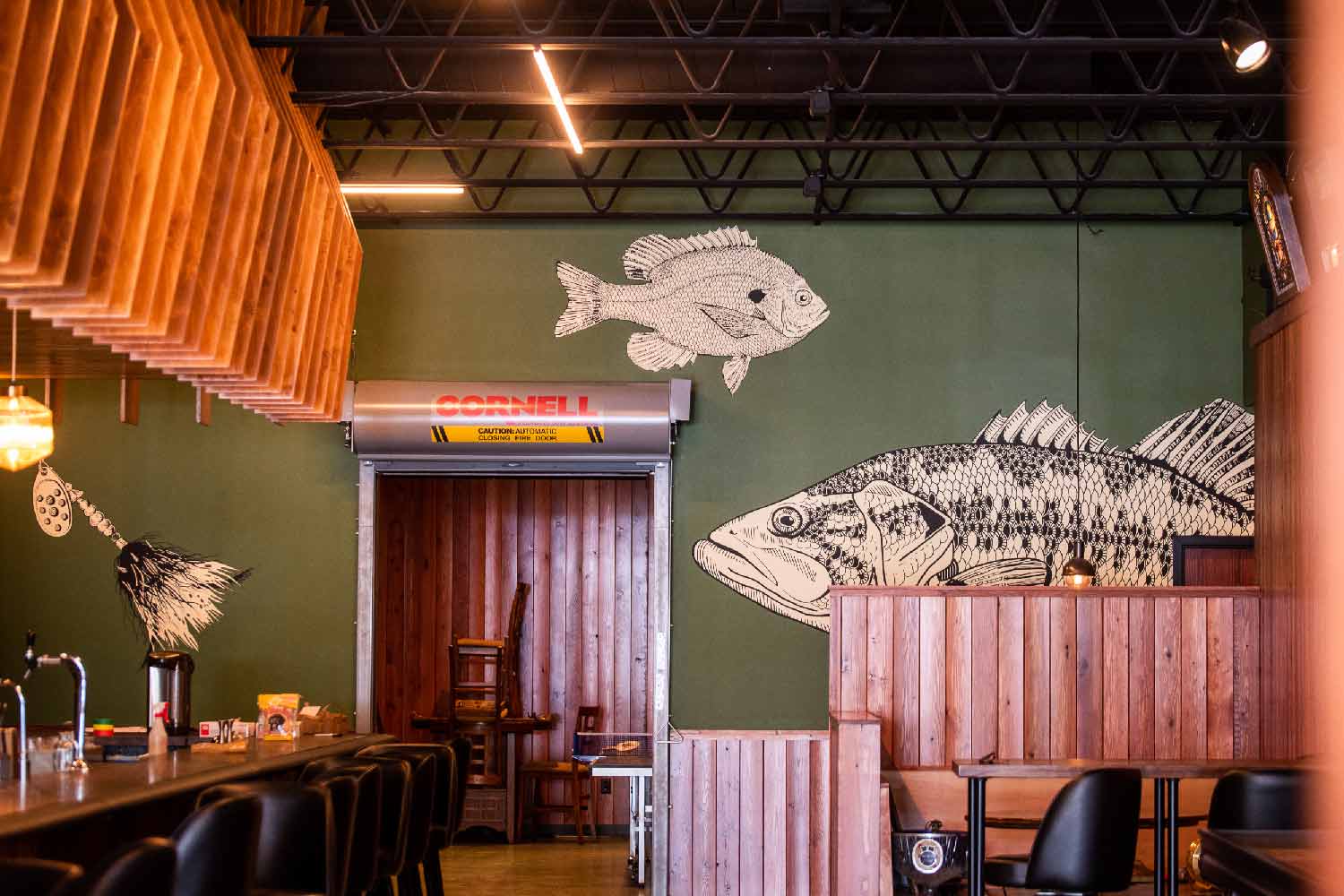 A beer and whiskey bar

Samie Scott, part of the Robin Room team, painted the fish/lure wall murals. She owns Vandal Automatic LLC and hired Robert Foster for the big wall mural and to help with the recently finished storefront sign. Meagan Weber designed the logo and menu.

The bar features 22 tappers, with 16 for beer, three for rotating cocktails and three for wine. “The idea is to be a beer and whiskey bar,” according to Vogel, who says the end goal is for 300 different spirits. “Having 300 spirits, you’ve got a lot of options.” 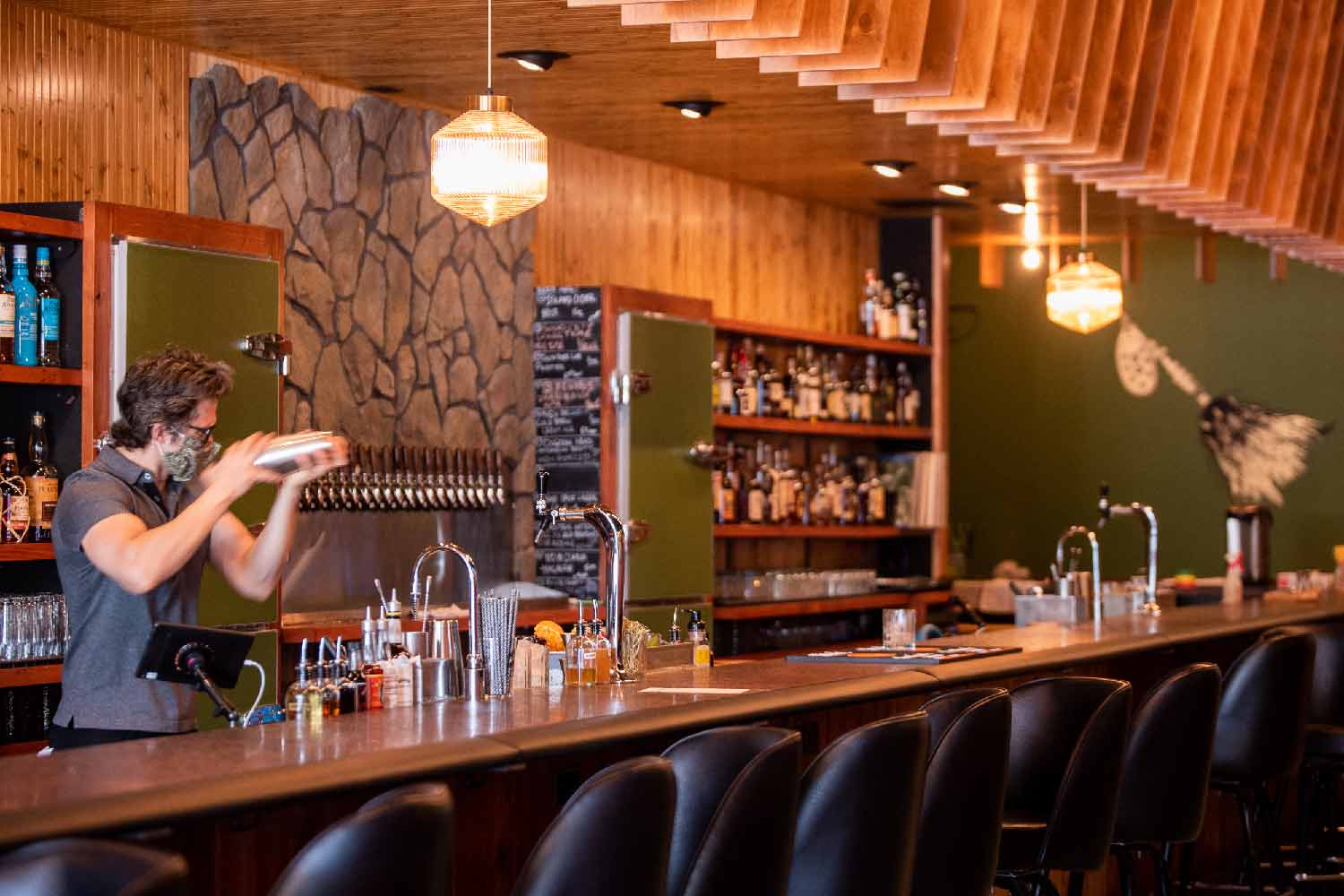 As for food, tackle boxes with local and imported cheese, spreads and crackers are available and The Muskie “proudly” offers Fraboni’s pizza, with a custom Muskellounge pizza coming out soon. “So that should be a spicy little ordeal,” Pharr says.

Open seven days a week, The Muskie has an agreement with its neighborhood to close the patio at 10 p.m. The busiest times have been around happy hour, which runs from 4-6 p.m. Vogel said it’s hard to anticipate a Monona Drive crowd versus a downtown one, and when you add in COVID and losing hours for potential revenue, the opening has been anything but normal. 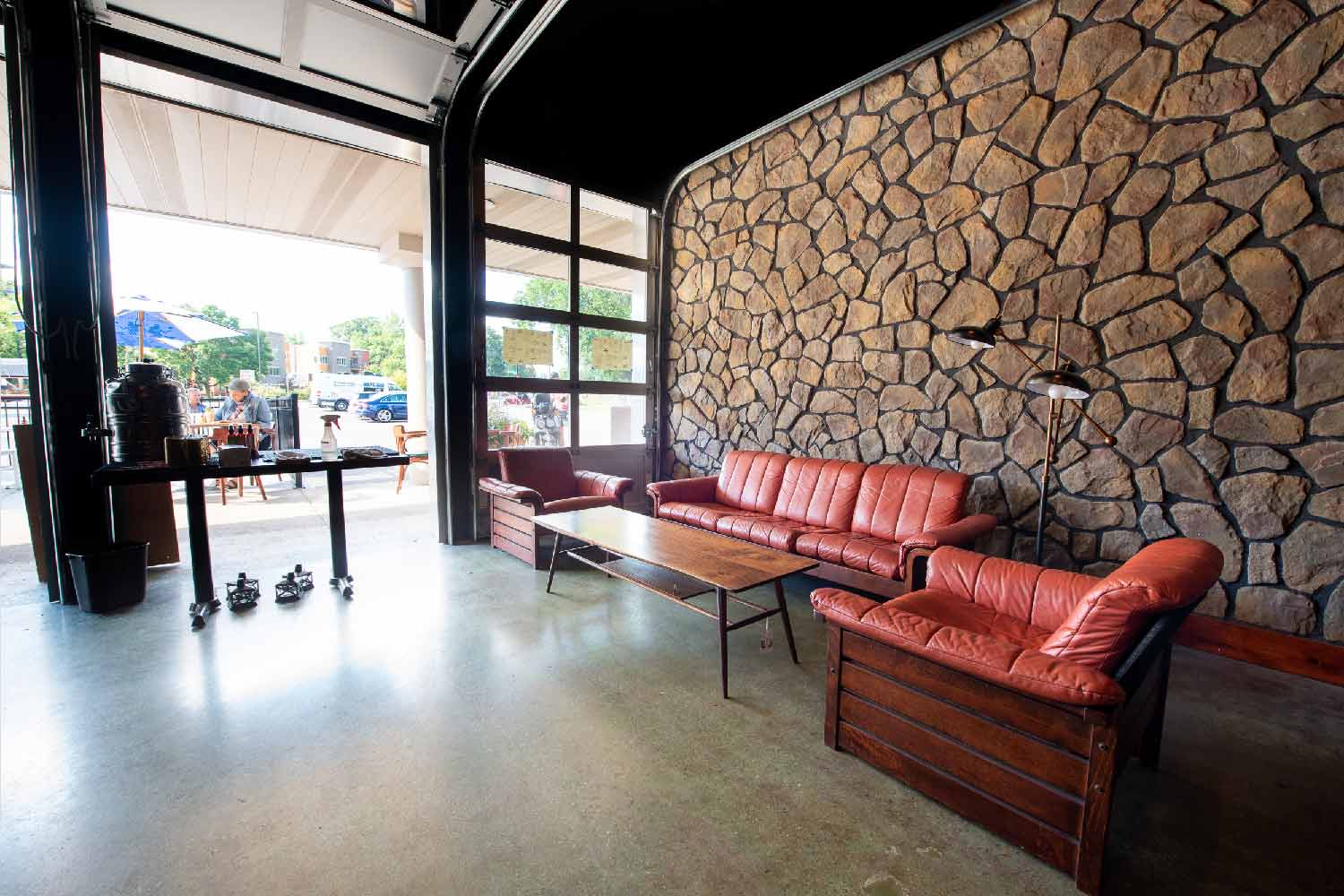 But for now, outdoors

Pharr was surprised with how many people said The Muskie was their first patio experience since the pandemic upended our everyday lives.

“Hopefully things will come around a little bit better and bring people out,” Pharr said.

There were a dozen people spaced about the patio on a recent Tuesday late afternoon, as local musician Cédric Baetche plucked his guitar. The Muskie is having Baetche play live each Tuesday from 4:30-6 p.m., and hosted an outdoor “Smarter Than You” trivia night on Sunday, Aug. 23. According to Vogel, they may try to sneak in a couple more trivia games in September and August. 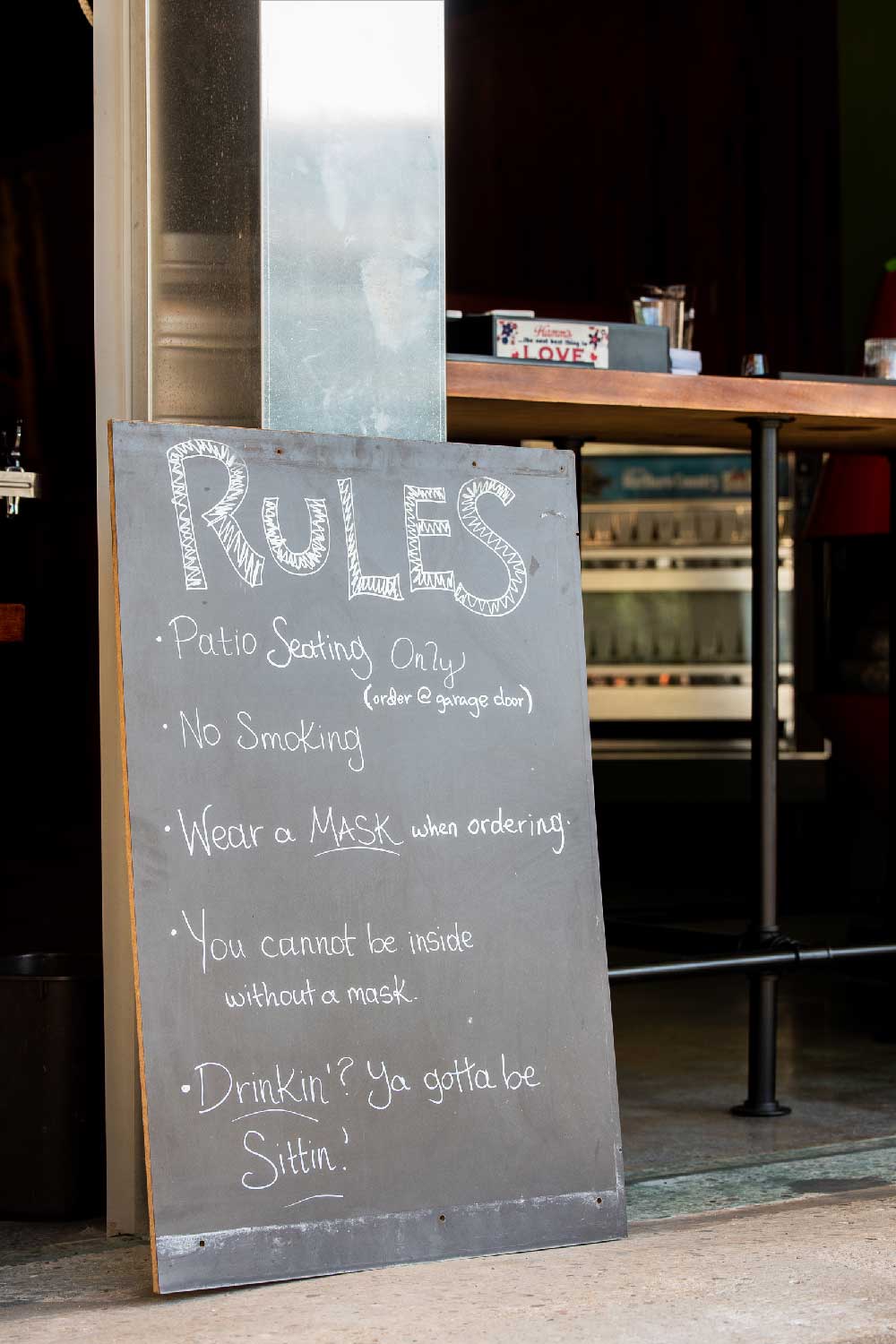 But the biggest thing is getting back to whatever constitutes the new normal. That shuffleboard table won’t play itself.

The Muskellounge and Sporting Club — aka “The Muskie” (4102 Monona Dr., in the Lake Edge Shopping Center) — is open seven days a week from 3-10 p.m. with patio seating only. Current capacity is 46, not counting dogs.