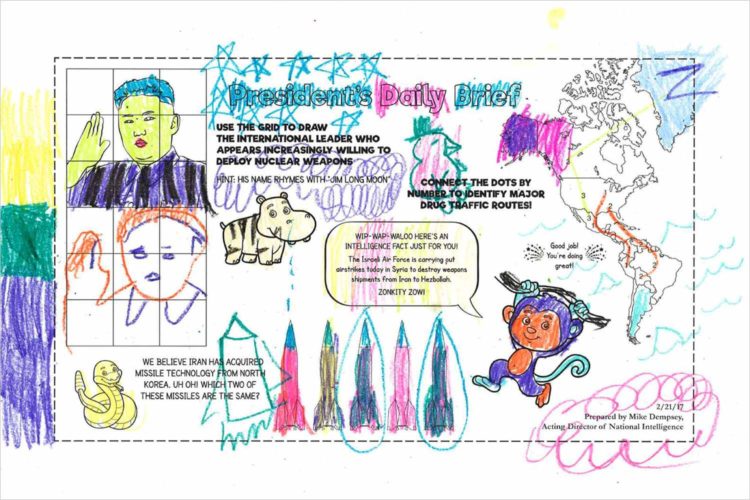 For many, the presidency of Donald J. Trump has been like a real life Onion article. The news these days comes so fast, so furious and so unbelievable that it’s hard to keep up. And that’s just for an average citizen. Imagine having to take that news and turn it into biting, absurdist satire.

Such has been the problem for the staffers at The Onion. In an interview with The Washington Post, editor-in-chief Cole Bolton said, “We just couldn’t keep up all the time. There was just so much to ridicule that it got to be such a drag.” That’s a real downer, especially coming from a guy whose site recently published an article called “Woman Rearranging Condiments in Refrigerator Door Like Puzzle in Ancient Tomb.”

Luckily, Bolton and his cohorts have found a way around that. On Monday, The Onion unleashed “The Trump Documents” upon the world. At around 700 pages, they’re styled like one of those actual leaks of classified information you’re probably pretty used to seeing these days. But instead of instilling in the reader an almost permanent “sky is falling” feeling, these leaks are hilarious.

Take, for example, President Trump’s daily intelligence briefings, which are presented in The Onion as coloring placemats similar to the ones you may find at any family-friendly restaurant. Or the files pertaining to White House adviser/human gin blossom Stephen Bannon, which include a bizarre exchange with Interior Secretary Ryan Zinke in which Bannon asks for weirdly specific pictures of roadkill. Or the series of heartbreaking emails from Sean Spicer to his fictional Uncle Wilbur that document Spicer’s rapid descent into madness.

Taking in all of “The Trump Documents” is a daunting task, but if you’re looking for a silver lining in the shit-hurricane that is the Trump regime, The Onion has never been better.