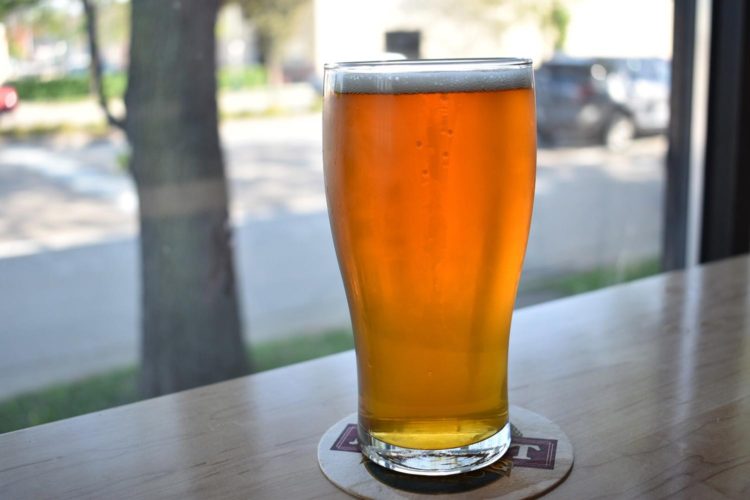 “Does the beer suck?” This question races through my mind each time I check out a new brewery or taproom — and it should be your first question, too.

I don’t expect a new brewery’s beers to suck, but the fact is it’s difficult to excel at everything. Many startup breweries dream of having the perfect food menu and ambiance and assume the beer will be as good as the homebrew batches they’ve been making for years. Too often, the beer is taken for granted. If the beer sucks, no amount of atmosphere or cuisine can make up for it.

With so many craft beer options in the Madison area, life’s too short to drink crappy beer. So I’m out to let you know which breweries should be on your radar and which ones still need to find their footing.

First up: the Parched Eagle Taproom, which opened May 12. Does it suck? Most definitely not.

While the Parched Eagle may appear to be yet another new brewery here (not that we’ll ever have enough), they’ve been brewing out of their one barrel system in Westport for over two years. One of the best-kept secrets in the area, brewmaster and co-owner Jim Goronson and business partner Tom Christie have been selling pints and growlers out of their brewery-adjacent taproom since 2015.

Beer is certainly the focus at Parched Eagle’s new taproom, which hopes to follow other East Wash corridor success stories (see: The Malt House, Growlers to Go Go/Trixie’s and Dexter’s Pub). A long, prominent bar made of white pine culled from the UW Arboretum draws your immediate attention to the 10 taplines on the wall. Parched Eagle beers occupied six of the taplines for the grand opening while guest taps, including a dedicated gluten-free line, filled the remaining four. The taproom was otherwise sparsely decorated, which might simply be attributed to the late rush to get it open.

Being familiar with the Parched Eagle Brewpub’s flagship IPA, Hop-Bearer, I was excited to try what will be the Taproom’s “house beer”: Burgeoning Goth Queen, an oatmeal stout. While perhaps unusual for a stout to be a location’s “house beer,” this one is worthy of the title. Dark, roasted malts give the beer an opaque appearance and a hint of coffee in the aroma. It is full bodied, in both viscosity and mouthfeel, and gives a clean finish that is a touch dry. I might have preferred a little bit sweeter finish to round out the flavor, but I’ll be back for more of this one.

La Chingada Caca, the Parched Eagle’s Maibock offering, sets lofty expectations with its moniker, deeming it “The Fucking Shit.” It very nearly lives up to those expectations. A Maibock is traditionally associated with spring and therefore should be malty but with enough hops to make it appropriate no matter the inconsistent spring weather. La Chingada Caca hits on both notes, with a medium body carrying a nice hit of traditional noble hop aroma. (It is perhaps more hoppiness than the style calls for, but I don’t particularly care because I don’t base my reviews on style.) There’s some lightly toasted pils character present, which I appreciate as I have a recent obsession with pilsners, especially the German variety. I’d love to see the pils character accentuated even more, though that may just be my German pilsner obsession talking.

Circling back to the flagship, Hop-Bearer is undoubtedly the beer that puts the “best” in the “best kept secret.” It’s been challenging for Goronson to keep up with the demand for this beer due to his brewery’s physical limitations. While plans to upgrade the brewery’s capacity move forward, Parched Eagle has enlisted the help of the House of Brews to bolster supply. The first barrel of Hop-Bearer on at the taphouse was produced in Westport, so it will be interesting to compare whether there is any noticeable difference when it is switched over to the stock from House of Brews.

Hop-Bearer should meet the needs of Madison’s hop heads. A surprisingly prevalent malt profile gives way to a punch of citrusy hop aroma and pronounced hop bitterness. That said, Hop-Bearer is constrained in its hoppiness, and dare I say balanced, given the state of today’s IPAs. It isn’t trying to overwhelm you on bitterness or aroma. The malt profile is perhaps more of a traditional English IPA, but that’s just a pesky style restriction. Given the malt backbone, Hop-Bearer probably trends more for the Hopalicious crowd than the Fantasy Factory fans. That said, Hop-Bearer might just be better than both.