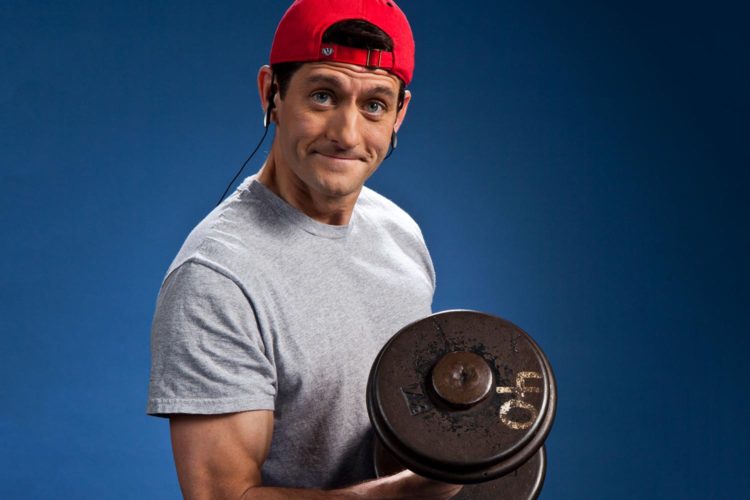 Yesterday marked the fifth anniversary of Time magazine (of all places) publishing Paul Ryan’s now infamous workout photo shoot, a moment notable for being the exact instant in history that backwards hats became uncool. At the time, Ryan was Mitt Romney’s running mate during the 2012 presidential election and a bright, rising star in a Republican Party desperately in need of one.

These days, as you probably well know, the Janesville native is the Speaker of the House and one of the most widely disliked figures in American politics, making Ryan’s workout photos one of the few enjoyable moments of his political career — and that’s only because we got to laugh at him. To celebrate the anniversary, here’s five times My Man Paul has embarrassed himself publicly.

The earth is getting warmer. That’s a scientific fact, with countless examples of hard evidence available to back it up. But My Man Paul doesn’t need hard evidence — obviously, global warming can’t be real, because it snowed in southern Wisconsin. Conversely, in 2009, the year My Man Paul wrote his idiotic op-ed, it snowed five inches in Alabama, a place where it definitely does not snow. In March.

Back in 2010, My Man Paul was co-sponsor (with Todd Akin of 2012 “legitimate rape” infamy) of the No Taxpayer Funding for Abortion Act which — in a small display of humanity — excluded rape, albeit “forcible rape” only. Many critics saw this qualifier as misogynistic and exclusionary, as it didn’t explicitly cover things like statutory and date rape. The phrasing was ultimately changed to cover all forms of rape, but not before making My Man Paul look like a real piece of shit, trying to define what is and is not rape.

Some of My Man Paul’s signature issues are social security and Medicare, two programs designed to provide monetary and medical assistance to senior citizens. My Man Paul also views these two programs as “broken” and in need of revamping. His idea? Well, for starters, his idea on social security is infuriatingly vague, so I don’t know what to tell you. On Medicare, however, My Man Paul has been very clear: Under a façade of “competition,” he wants to privatize it, likely resulting in an astronomical price hike for seniors. Fuck them, right? As long as the check clears!

That time My Man Paul swept his colleague’s concerns about Russian interference in U.S. politics under the rug to protect his party

“This is how we know we’re a real family here.”

That’s what My Man Paul told a room full of Republican legislators when California Rep. Kevin McCarthy said he thought two people — his fellow Golden State Rep. Dana Rohrabacher and then-presidential candidate Donald Trump — were being paid by the Russians. He insisted the conversation was off the record and emphatically told the room “NO LEAKS.” That’s a good way to play it when there’s a question of a hostile foreign power meddling in an election: Put your fingers in your ears and go “LA LA LA I CAN’T HEAR YOU” like My Man Paul.

When he was announced as Mitt Romney’s running mate in 2012, The Failing New York Times published an article that stated one of My Man Paul’s favorite bands was, confusingly, leftist rap-metal heroes Rage Against the Machine. In response, Rage guitarist Tom Morello wrote a scathing op-ed for Rolling Stone in which he says, among other things, “(Ryan) is the embodiment of the machine that our music has been raging against for two decades.”

That about sums up the hypocrisy, but Morello was not done: