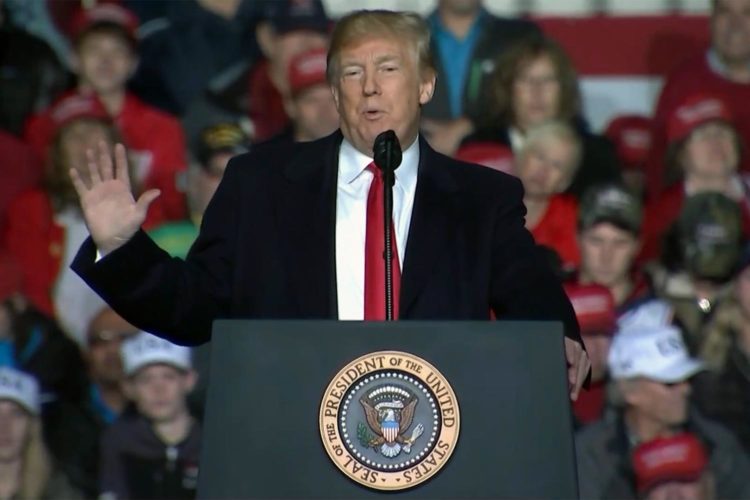 Donald J. Trump is a master of bringing out the absolute worst in people.

We’re not just talking about racist legislation, cruelty for sport, or whatever the fuck this shit is, either. We’re talking about otherwise sane conservatives cutting their tethers to reality and hopping on board the Trump Train. Conservatives like Leah Vukmir, the Republican candidate for U.S. Senate, who made sure to blow on her dog whistle extra loud ahead of President 4Chan’s rally in Mosinee, Wis. on Wednesday night.

Maybe she overheard this at Jacob Wohl’s coffee shop?

Vukmir, who is currently trailing Tammy Baldwin by double digits ahead of their Nov. 8 election, is clearly grasping at straws. To say this hours after it was reported that multiple bombs were sent to prominent Trump critics — including the Obama and Clinton families — is as stupid as it is appalling. Sort of like accusing Democrats of sending bombs to themselves.

Incidentally, Trump in Mosinee was a bit understated by his standards. He condemned the string of attempted bombings: “Any acts or threats of political violence are an attack on democracy itself.” But in 2016, if you recall, Trump suggested “Second Amendment people” take care of Hillary Clinton, who had a bomb mailed to her home this week.

Trump criticizes Democrats over taxes and regulation, then says, “By the way, do you see how nice I’m behaving today?…Have you ever seen this? We’re all behaving very well. And hopefully we can keep it that way. We’re gonna keep it that way.”

After Trump got the whole “acting like a human adult” thing out of the way, the remainder of the rally seemed to follow his typical script. Democrats evil, immigrants evil, Trump very special and good and by the way friends with Kanye West now, and so on and so forth until the universe succumbs to an inevitable heat death.

Trump is talking tonight like a kid who’s been told he has to not throw a tantrum at a funeral and keeps elbowing his mom to be like “LOOK I’M BEING GOOD.” https://t.co/2UtwiT2ZoJ

I’m skeptical about anyone who wants to call themselves a Republican in 2018, let alone run for office as one. At its core, Republicanism was about conservative ideals like rugged individualism and small government — two things I don’t personally agree with, but nonetheless accept as valid stances. But this isn’t conservatism. It’s regurgitated catchphrases and gleeful cruelty, willful ignorance and self-serving theology. It’s a cult whose worst impulses are emboldened by its most fervent members.

In other words, it’s very much the party of Donald Trump.