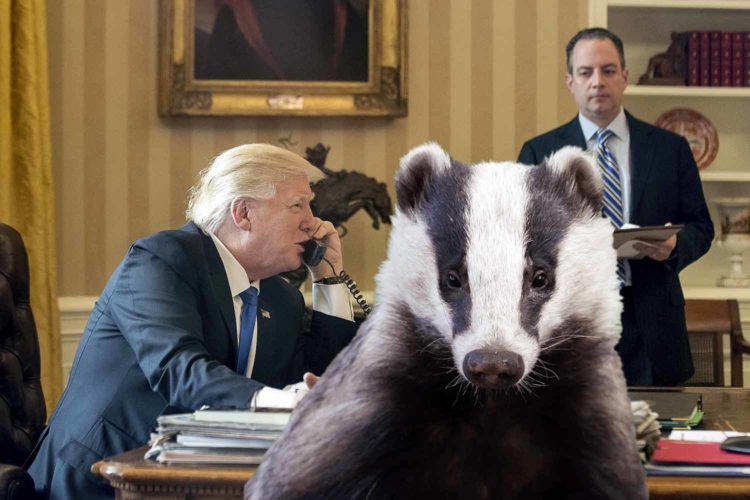 Wisconsin pop quiz: How much do you know about badgers?

Actually, let me rephrase that: Do you know enough about badgers to make Donald Trump happy? That very insane question is part of a depressingly real situation involving the president’s former chief of staff, Wisconsin native Reince Priebus.

As we’ve learned in the last three-plus years, Donald Trump is generally ignorant and easily distracted. He acts on his own whims, which includes treating staffers like human Siris and Alexas. According to the new book Sinking in the Swamp: How Trump’s Minions and Misfits Poisoned Washington, the president of the United States reportedly had a habit of interrupting important meetings to grill the chief of staff about his badger knowledge.

there’s a part of the book by @lachlan & me that probs won’t get excerpted anywhere, but i have a soft spot for it: President Trump would repeatedly derail WH/policy conversations he was having w/ Reince Priebus to ask him if Wisconsin badgers were mean to people & what they ate

Trump was so intent on learning about the little omnivores, say authors Lachlan Markay and Asawin Suebsaeng, that he would “waste” Reince’s time during chats about unimportant junk like health care. (Though it can’t be any more wasteful than CBS devoting airtime to a partisan hack like Priebus.) Just look at this passage from Sinking the Swamp:

“Are they mean to people?” Trump at least twice asked Priebus in the opening months of his presidency. “Or are they friendly creatures?” The president would also ask if Priebus had any photos of badgers he could show him, and if Priebus could carefully explain to him how badgers “work” exactly.

It is terrifying that the U.S. president behaves during national security briefings like a six-year-old asking if you have games on your phone. But the premise here is hilarious: A major world leader bringing a meeting to a grinding halt to ask what badgers ate? That sounds like a Mr. Show sketch.

And the assumption that Priebus is some sort of badger expert because he’s from Wisconsin is pretty silly. For example, I wouldn’t expect an Oregonian to know everything about ducks. But in Trump’s brain, “Wisconsinite” means the same thing as “resident White House badger historian.” It’s the funniest thing in the world until you remember he has access to the nuclear launch codes.