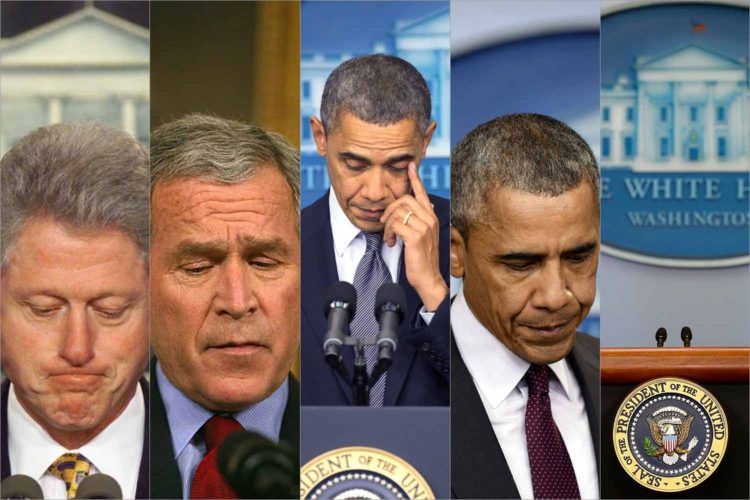 I think that [County Commission Chair] Patricia Holloway would not mind if I said that amidst all of the turmoil and grief that she and others are experiencing, she said to me just a moment ago that perhaps now America would wake up to the dimensions of this challenge if it could happen in a place like Littleton and we could prevent anything like this from happening again. We pray that she is right.

We’ve endured too many of these tragedies in the past few years. And each time I learn the news I react not as a President, but as anybody else would — as a parent. And that was especially true today. I know there’s not a parent in America who doesn’t feel the same overwhelming grief that I do.

But as I said just a few months ago, and I said a few months before that, and I said each time we see one of these mass shootings, our thoughts and prayers are not enough. It’s not enough. It does not capture the heartache and grief and anger that we should feel. And it does nothing to prevent this carnage from being inflicted someplace else in America — next week, or a couple of months from now.

My prayers and condolences to the families of the victims of the terrible Florida shooting. No child, teacher or anyone else should ever feel unsafe in an American school.

President Trump did not address the nation today after the Florida school shooting and, at least for now, he does not have any public appearances scheduled for tomorrow either

The President will address the nation at 11am today on the tragic shooting in Parkland, Florida

Answer hate with love. Answer cruelty with kindness. We must also work together to create a culture in our country that embraces the dignity of life that creates deep and meaningful human connections and that turns classmates and colleagues into friends and neighbors.