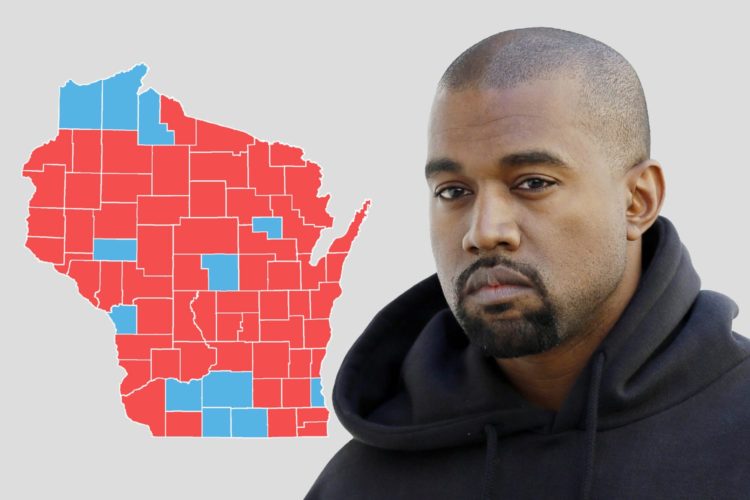 For many voters, choosing between Donald Trump and Joe Biden is like an old South Park gag: would you rather have a giant douche or a turd sandwich in the White House?

If this sounds like you, I have “good” news. Superstar rapper and presidential candidate Kanye West is a step closer to garnering votes in Wisconsin, thanks to an assist from a highly-connected Republican operative. GOP attorney and former Brad Schimel deputy chief of staff Lane Ruhland dropped off the paperwork in Madison on Tuesday for Ye to appear on the ballot here.

“No comment” as woman enters election commission building just after 5p in Madison to drop off signatures for Kanye West pic.twitter.com/zVxePn5Fe2

It should be noted that while West is running as an independent — on the *checks notes* Birthday Party ticket — recent years have seen him ride hard for Donald Trump. Not only has he taken to accessorizing a MAGA hat with his Yeezy Boosts, but West’s campaign team is full of GOP-connected strategists. For example, Ruhland (who works for the sinister-sounding law firm Husch Blackwell) has represented Trump in court as recently as last week.

Republicans likely hope he’d draw enough of the vote in Wisconsin to score another Trump win. But should you vote for Kanye West? No, you absolutely fucking shouldn’t. He may be a genius producer, but his campaign is an alarming example of a man battling serious mental health issues. Kanye West doesn’t need to be president; he needs someone to help him. And the fact that so many people are enabling him in an attempt to capitalize off it is a major bummer.

Just swallow your pride and vote for the turd sandwich.