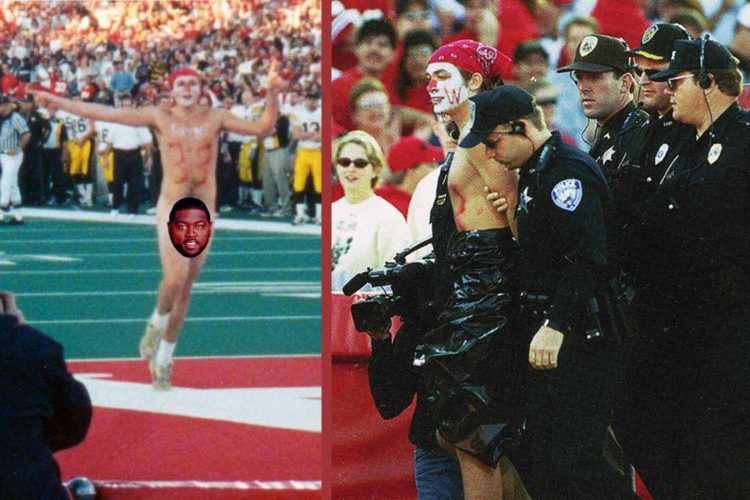 For many Wisconsin Badgers fans, Nov. 13, 1999 will always be the day Ron Dayne broke the NCAA’s all-time rushing yards record.

For those in attendance, it is also when they saw a complete stranger’s dick and balls on the field.

This year is the 20th anniversary of Dayne’s record-breaking, Heisman-winning season. That alone is cause for celebration — especially as current Badger rusher Jonathan Taylor is making a case for his own Heisman. But that also means it’s been two decades since fan and then-sophomore Timothy Condon ran out in front of the Camp Randall Stadium crowd in his birthday suit. In remembrance, let’s take a brief look at both events.

Ron Dayne is, without question, the greatest Badger ever (at least in football terms) and I won’t hear any other answers. Throughout his college career, the hulking tailback rushed for a whopping 7,125 yards. And for the Nov. 13 game against the Iowa Hawkeyes, it was imminent that Dayne was going to break the record that day. There were commemorative towels printed for the occasion. It was a big deal.

For anyone expecting a cinematic moment, the actual run was rather anticlimactic. It was just a typical, 20-yard run in the second quarter. Fans had seen Dayne do it countless times. But it nonetheless placed him atop the NCAA rushing list. And when adjusted to include bowl games before 2002, Dayne still holds the top spot.

But it was maybe the second-most memorable run of the day.

Tim Condon knew exactly what he was doing. The UW student had planned his streak for a month. He knew he wanted to celebrate Dayne’s record in a memorable way.

“I’ve always been one who likes to push things a little further,” said in a 1999 interview with the Wisconsin State Journal.

Security probably should have taken note when Condon showed up to the game in a not-at-all conspicuous trench coat. Under it, all he wore were sneakers and body paint that read “Insane Dayne.” He made his move soon after Dayne broke the record. After relocating from his seat in row 60, Condon shed the coat, hopped onto the field and took off.

“I figured I would be pursued, but there was nothing. I got to the 50-yard line and realized no one was chasing me, and I found that odd,” he said.

Eventually, security caught on and apprehended Condon — but not before he ran a full 100 yards and struck the iconic “Heisman” pose in the south endzone. He was arrested for lewd and lascivious behavior, unlawful entry to the playing field, and disorderly conduct. The charges were dropped after he put in 60 hours of community service at Wisconsin Public Television.

“The cops found it kind of odd that I wasn’t intoxicated,” said Condon.

Or as UW police officer Brian Bridges put it, “For something that disruptive, it went reasonably well.”

For the most part, people got a good laugh out of Condon’s streak. Even Dayne seemed to think it was funny, appearing to laugh to himself under his facemask. (“I didn’t talk to Ron Dayne, but I saw his mother on television and she seemed to be amused,” Condon said in 1999.) And in 2017, the streak was named one of the top 100 moments in Camp Randall history. Condon was invited back for the ceremony at the stadium. This time, however, he was fully clothed.

“I’m just glad that the university was OK with it then and is OK with it now,” he told The Badger Report in 2017. (He did not reply to a request for comment this week.)

Now, Timothy Condon and Ron Dayne are forever connected in Wisconsin sports lore. The transcendent running back and the goof who inserted his naked ass into a historic moment. I’d say it’s a match made in heaven, but it seems like something that would only happen in Madison.