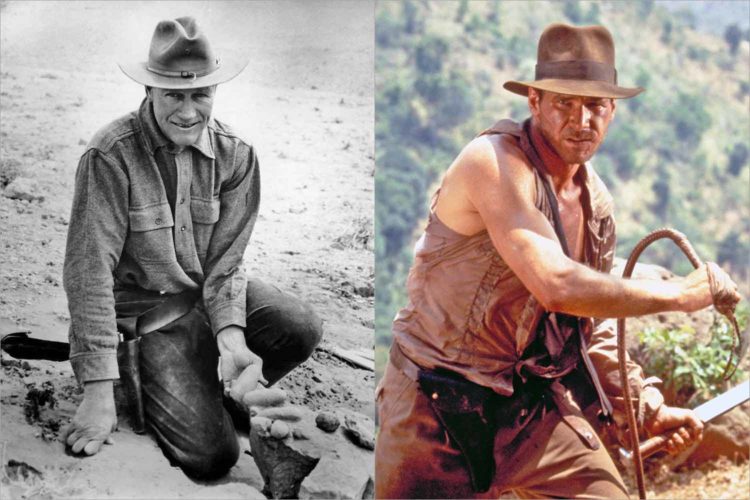 Throughout history, some great fictional characters have called Wisconsin home.

From Parks and Recreation’s Chris Traeger to Boardwalk Empire’s Richard Harrow, it seems as if time spent in the Badger State makes for wonderful, dynamic characters. But did you know that literally one of the most beloved characters of all time might not exist without our state?

Raiders of the Lost Ark screens at the Memorial Union Terrace on July 21. The classic 1981 film introduced the world to Indiana Jones, a swashbuckling college professor played by Harrison Ford. We know Ford attended Ripon College (for a while), but Ford’s also a real guy. Indy isn’t, but he may be based on a very real person — from Beloit, of all places.

His name was Roy Chapman Andrews, and he was an academic, archaeologist and adventurer. His writings made him a national celebrity, and his discoveries made him a scientific hero. So how did a kid from Beloit, Wisconsin go on to inspire a Hollywood franchise? (As a kid from Beloit myself, I am open to advice.)

“Born under a lucky star”

Roy Chapman Andrews was born in Beloit on Jan. 26, 1884. He spent his childhood exploring the fields and streams on the west side of town. Over a century later, I would drive this same part of town listening to “Champagne Supernova” on repeat and smoking ditch weed. But unlike yr boy, Andrews taught himself taxidermy as a child and used it to pay for tuition at Beloit College.

While in school, Andrews nearly died in a boating accident on the Rock River. He and a buddy were canoeing through flood-raised waters when they both fell into the strong current. His friend was overtaken with muscle cramps and did not survive. Andrews was swept away, unable to help. He eventually latched onto a submerged tree and made it shore from there.

Andrews would later say being “born under a lucky star” helped protect him in his travels. But in reality, it was an attention to detail and safety instilled in him by this incident.

This belongs in a museum!

After graduating from Beloit College in 1906, Roy Chapman Andrews hopped on a train to New York to pursue a job at the American Museum of Natural History. None were available when he arrived, but Andrews wasn’t going to let his dream of working at the museum be dashed. And so he was hired to clean the floors, as well as assist in the taxidermy department. (I really should have learned taxidermy.)

Andrews rose through the ranks quickly and soon found himself out in the field. Early in his career, he explored vast swathes of Asia and continued cheating death. In one of his books, On the Trail of the Ancient Man, Andrews recalled 10 (highly relatable) times he nearly lost his life in the early years:

“Two were from drowning in typhoons, one was when our boat was charged by a wounded whale, once my wife and I were nearly eaten by wild dogs, once we were in great danger from fanatical lama priests, two were close calls when I fell over cliffs, once was nearly caught by a huge python, and twice I might have been killed by bandits.”

But Roy Chapman Andrews’ most famous adventures were his excursions into the Gobi Desert in the 1920s. During this time, Andrews found several complete dinosaur skeletons, as well as the largest collection of mammals ever recovered in a single trip. He was also one of the first to find conclusive proof that mammals lived alongside the dinos.

Perhaps his best-known discovery was a collection of dinosaur eggs in the Gobi. The public went nuts for this, much to Andrews’ chagrin. For one thing, he wasn’t the first person to discover eggs — a French priest had done it decades earlier. And for another, Andrews didn’t even want to talk about it. He thought it distracted from a more important discovery: the full skeleton of an oviraptor, there to steal the eggs in question.

Long after Andrews left the field, his exploits continued to hold American’s imaginations. (As one would expect from a guy whose life story could be titled Raiders of Jurassic Park.) He wrote 13 books, and his swashbuckling persona helped to inspire a host of adventure movies in the 1950s, many with heroes based on guys like Andrews.

These works inspired another generation of filmmakers, now with the money and tech to really do the stories cinematic justice. In 1981, Steven Spielberg directed a George Lucas script about a brainy, badass hero with more than a passing resemblance to a certain brainy badass from Beloit.

Lucas has never come out and said “Indiana Jones is Roy Chapman Andrews,” but it’s hard to deny the influence of those Andrews-based adventure flicks on Raiders of the Lost Ark. By proxy, Jones is Andrews. It’s been written about enough that it might as well be canon.

So even if Lucas or Spielberg never confirm it officially, we can simply view it as someone like Andrews would: gather evidence, compare notes, make a conclusion. And in my extremely scientific opinion, Roy Chapman Andrews is Indiana Jones but better. He’s real.