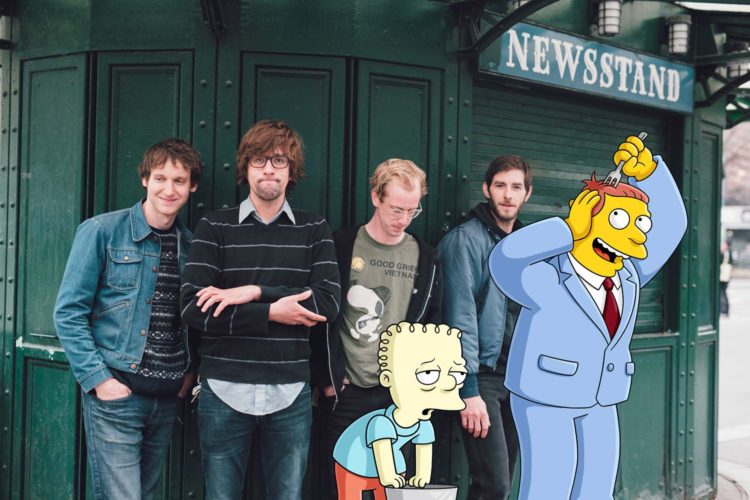 In the first line of “Kangaroo Pocket,” the opening track of Rozwell Kid’s 2014 album Too Shabby, frontman Jordan Hudkins sings about how season three of The Simpsons and a thing of hummus is all he needs in life. This begs the question: To a fan like Hudkins, with which Simpsons character does he feel his band has the most in common?

“Probably Wendell, the kid who throws up all the time on the bus,” Hudkins says. “And then we grow up to be Lionel Hutz, pretending like we know what we’re doing but we have no clue.”

But the West Virginia-based Rozwell Kid seems to know exactly what they’re doing, and that’s making pitch-perfect and often absurdly humorous power pop records that exist at the crossroads of Weezer, Blink-182 and Thin Lizzy. (“I don’t think I’ve read a single article about Rozwell Kid that doesn’t have Weezer in the first paragraph,” he jokes.) Their latest, Precious Art, includes everything from brutally honest pop gems to hilarious 50-second throwaways about being turned into a dog.

Ahead of their Oct. 17 show at High Noon Saloon with The World is a Beautiful Place & I Am No Longer Afraid to Die and Ratboys, The Bozho spoke with Hudkins to talk about keeping things light and learning as you go.

You use a lot of humor in your songs. You even have a love song about boogers. How do you strike a balance between making something funny and turning it into a joke?
That’s a fine line that I make a conscious effort to straddle, if that’s the right word. I don’t want to be a joke band. There’s a lot of sincerity in Rozwell Kid’s material, and everything comes from a real place with real emotions. I feel like sometimes it’s just the way I talk and the way I approach things. I’m a little tongue-in-cheek and I appreciate the levity that humor can bring to a situation. Sometimes turning things into a joke makes reality a little easier to swallow.

It’s a way of taking something serious and presenting it in a way that people don’t have to dwell on it too much.
It takes the sting out of some things which is cool. You know that Mary Poppins [line] “a spoonful of sugar helps the medicine go down”? I think it just comes across naturally in the way I communicate, and my influences have always been rooted in comedy and humor and tongue-in-cheek.

Rozwell Kid seems to make music for a very specific type of person: the type of person who watched a lot of Conan O’Brien and would stay up late making prank calls.
(laughs) Much to the detriment of widespread success, we have found a unique audience.

Speaking of success, I’m curious as to where you guys were playing your first shows? As far as I know, West Virginia isn’t really known for its music scene.
There are pockets. There are some college towns where there are some really good artists. I guess when people think about the musical climate in West Virginia, the first thing that comes to mind is, like, old time music and bluegrass. But there are some really cool rock bands from the state. It’s kind of spread out a little bit, though. There’s no big central location; there are no huge metropolitan centers in West Virginia. But there’s definitely some cool stuff spread out.

When we started playing, we would play at a restaurant in town that would have shows or we would rent out a men’s club, like a VFW-style thing. There was this community building we would rent out, or the basement of a pizza shop. Kind of like DIY venues. But there are also some really cool venues in Huntington and Morgantown, where there’s this really great rock club. Any time we got the opportunity, we’d play there. And whenever we did, when we were first starting out, that was the peak. We were like, “Oh, man. We made it. We’re playing 123 Pleasant Street on Saturday. This is what it’s all for!”

In those early days, when did it start seeming viable that you may be able to make a career out of music?
I think it was about halfway through our first U.S. tour in 2014. I remember having a conversation on the phone with my girlfriend. We were in Reno, Nevada, and I was sitting in the van, kind of blown away because that was our first proper tour. Before that tour, I didn’t know what a tour manager was. I didn’t know what a day sheet was. I didn’t know what load in and load out time was. We were used to DIY shows, or playing bars at like 11 at night. The idea of a strict show schedule blew my mind. So I was learning pretty late in the game, and I remember being on the phone in Reno and thinking, “This is crazy. There are people singing along to our songs. There are people who know us in Reno, and we’ve never been here before. I don’t know, maybe I could do this.” Like a cliché script from a movie about a rock band trying to make it. (laughs)

Rozwell Kid plays the High Noon Saloon on Oct. 17 with The World is a Beautiful Place & I Am No Longer Afraid to Die. Is there any concern they won’t be able to fit their whole band on the stage?
Our first tour was with The World Is, and we’re playing a lot of the same rooms we did on that tour, and I’ve seen it first hand. They really know how to Tetris it onstage. It’s definitely a secret skill set that people don’t give them enough credit for.

High Noon Saloon, Music, Music Interviews, Rozwell Kid, The Simpsons, The World is a Beautiful Place and I am No Longer Afraid to Die