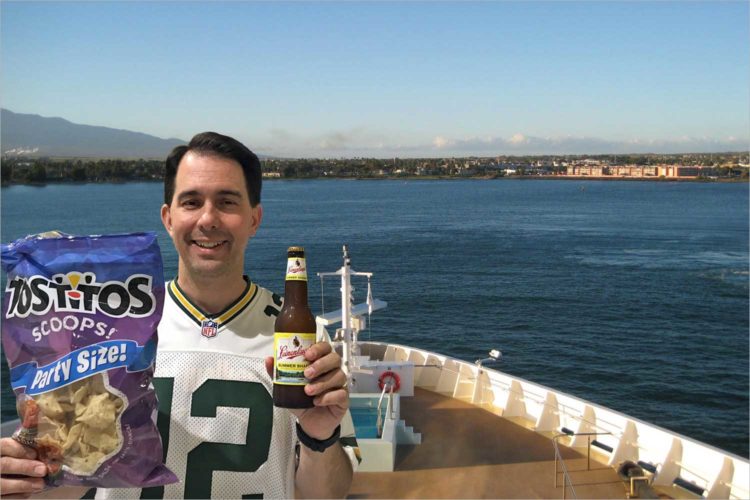 Scott Walker is offering a once in a lifetime opportunity to join him on a cruise around the Hawaiian islands next Jan. 29-Feb. 9. (And his family; Tonette isn’t about to get left at home.) Such trips are apparently a big thing now in the GOP’s endless search for more money, and Wisconsin’s former governor is looking to cash in.

The cheapest booking is “only $5,499,” plus taxes and fees. That’s an absolute steal if your idea of fun is spending 12 days and 11 nights trapped on a boat with Gov. Ham Sandwich.

But there’s so much more than the boat! There’s fun activities like a luau, and a visit to Pearl Harbor and the National Memorial Cemetery of the Pacific (for the troops). Attendees will also watch the Packers win the Super Bowl on Feb. 2; that one’s not listed on the itinerary because it goes without saying.

And my personal favorite: karaoke night! From the event’s description: “Tonette and I met for the first time on karaoke night at Saz’s (in Milwaukee) and we love it!”

The thought of seeing Scotty’s dopey visage fumbling through some pop song brings me immense joy. What’s his go-to song? My money is on “Friends in Low Places,” but then again Garth Brooks is actually kinda liberal so maybe not. Regardless, I’m going to go ahead and guess it ain’t Dropkick Murphys.

This is Walker’s second attempt at putting on a cruise. (Is that the proper term?). Back in 2017, while still in office, he and his wife planned an “inspirational” Christian cruise to Alaska. It was canceled two weeks later due to “scheduling issues,” but he has a lot more free time now.