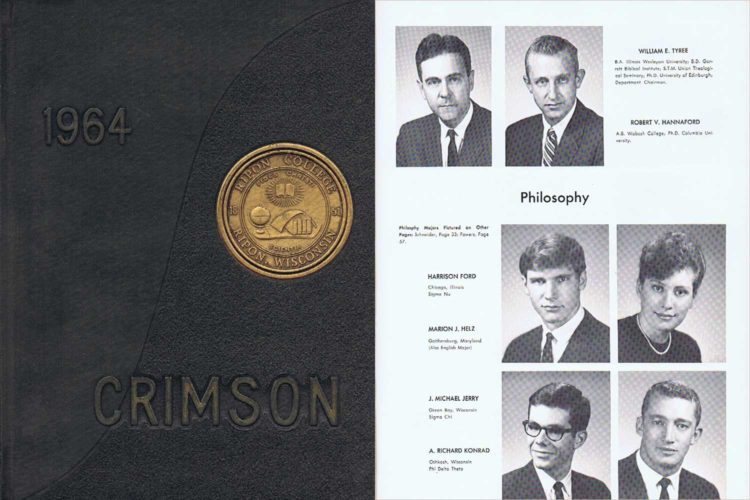 While May 4 is just an unofficial holiday for Star Wars fans, there are so dang many of us out there that you’d be hard-pressed to find someone not celebrating — even Wisconsin’s Department of Transportation got in on the fun this year.

So in observance of the day, let’s take a moment to highlight the Badger State’s greatest Star Wars connection, a man who happens to be one of the faces of the beloved franchise and made the Kessel run in less than 12 parsecs: Harrison Ford.

That’s right, Han Solo himself has some deep ties to the state of Wisconsin. A Chicago native, Ford enrolled at Ripon College in 1960, but flunked out during his senior year after losing interest in academics altogether. At that point, he was making money by hustling pool, which is admittedly a very Han Solo thing to do.

But Ford’s final semester ended up being a life-changer. He took an acting class (more or less on a whim) and appeared in Thornton Wilder’s The Skin of Our Teeth. Soon after, Ford took his first professional acting job, a summer stock gig in Williams Bay that saw him performing in a converted Mormon church with the Belfry Players.

The gig was so low-paying that Ford often had to help out with the carpentry, a skill that would incidentally lead to his casting as Han Solo. As legend has it, Ford was building a door at Francis Ford Coppola’s office when he ran into George Lucas, his American Graffiti director a few years earlier who now was casting a new science fiction film.

Seeing as Ford was an actor, Lucas would frequently pull him away from his carpenter duties to sit in on auditions for the film, often reading the part of a galactic smuggler named “Han Solo.” And the rest, as they say, is history.

Lucas eventually decided that Ford was perfect for the part (sorry Kurt Russell) and had him read for Han officially, which you can see in the clip below.

And for bonus Wisconsin connections, Ford’s other iconic role — the academic adventurer Indiana Jones — is based on an archaeologist named Roy Chapman Andrews, a native of Beloit.