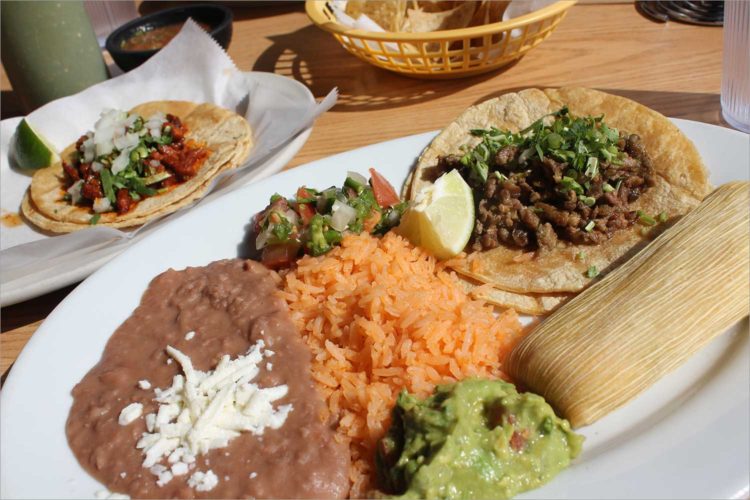 I’m a taco freak. I’m on a quest to eat as many tacos in Madison as I can, then tell you about them all. Know of a secret taqueria with the best cabeza or homemade tortillas? Tell me.

El Sabor de Puebla moved late last year from its Willy Street location to the former home of 4 & 20 Bakery. Its new digs are smaller than its old spot, but also more modern and less disjointed. The hybrid mix of counter service and full service implies that they get a lot of takeout business, and on a recent Sunday mid-afternoon, that was definitely true.

Asada: The steak was chopped finely, but there wasn’t much flavor, whether from a grill or seasonings. It needed a heavy application of guac, pico and salsa to make it something other than boring.

Al pastor: Now here’s where things get better. The pork was slathered in bright orange chile-specked marinade, and more than a little pork grease — a.k.a. the good stuff. If you’re not swiping your taco into the marinade and grease that’s dripped on your plate after a few bites of a taco al pastor, then something’s not right. This one, however, was pretty spot on in flavor, grease amount, and tenderness.

Tacos came on doubled up corn tortillas that were warm but a little tough. They held up just fine, even to the pork grease, and had a pronounced charred corn flavor. They were better than average.

One of the problems with the asada is that it came, for some reason, with cilantro and green onion instead of white onion. It would have given that taco more texture and flavor, which it needed. The taco al pastor, however, had a generous application of crunchy, mild white onions, which helped cut through the grease. Both had some token cilantro that was a little wilty.

The standard table salsa here hits you over the head with freshness, even though it’s not a pico de gallo. Judging by color, it’s a hybrid of red and green salsas and has a lot of onion. Two squeeze bottles of salsa are brought out with your food (why didn’t we just get those when we sat down too?). The red is too sweet, but the salsa verde has the freshness of uncooked ingredients and a real backbone of heat. It goes especially well on the al pastor.

Tacos are $2.50 each a la carte, which isn’t bad for the al pastor. You can also get them in various combinations, like I did with a tamale, rice and beans. Those usually come with pico and a dollop of chunky guacamole too.

Even if the asada fell flat, there’s a lot of other good stuff going on here. The brick red mole poblano is a specialty and definitely worth trying as it’s nutty, rich and smoky. Grab a horchata or agua fresca on the way out.