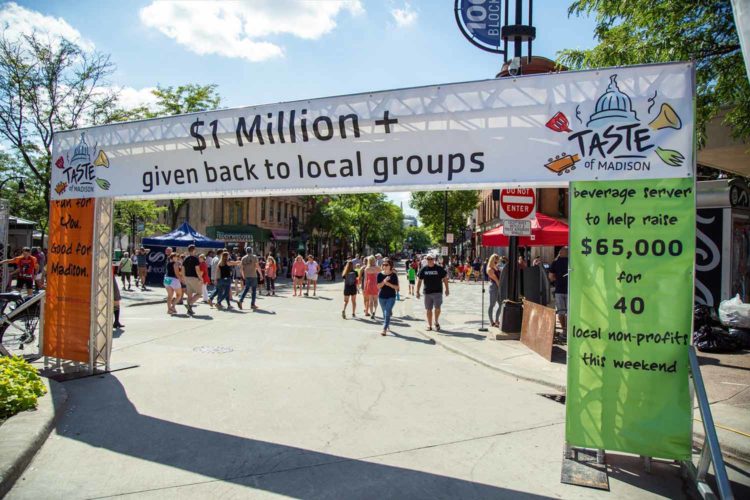 Taste of Madison is one of the city’s most iconic events. The Labor Day weekend festival draws an average of 250,000 people annually to the Capitol Square to feast on local food and live music. The economic impact it has in the community is substantial. When people come to Taste, they spend money not only at the event but also elsewhere — at gas stations, hotels, restaurants and more. In 2019, Taste added $7 million of spending to the Dane County economy.

What some people don’t know, however, is its charitable component. Last year, Taste raised $64,000 for the nonprofit groups that helped put on the event. More than $1 million has been donated to such local entities since it began in 1983.

But because of COVID-19, this year’s Taste of Madison is cancelled. “We recognize that when you can’t hold an event that’s of the magnitude of Taste, it’s so much bigger than cancelling a fun event,” says Sara Klemme, president of Madison Festivals, Inc. “It’s having a drastic impact on our community.”

To combat the loss of Taste’s usual charitable effect, MFI has launched the Taste of Madison Give Back Campaign, which runs online June 1-14. It’s structured to split proceeds 50/50 between the Second Harvest Food Bank and Cook It Forward.

It is with heavy hearts that we announce the cancellation of Taste of Madison 2020. We hope that even if we can’t be together in person, we can still make an impact to the community and are launching the Taste of Madison Give-Back Campaign. Learn more here:https://t.co/G5nZ0ztSx7 pic.twitter.com/cBmjR4f0V5

One of the largest food banks in southern Wisconsin, Second Harvest is dedicated to providing food security to those who lack it. Cook It Forward, meanwhile, is a new collaboration between some local restaurants and nonprofits to build a distribution network.

Because restaurants are currently running at 25% capacity or less, underused kitchens will be used to package fresh meals. With the help of intermediaries like local food banks and pantries, the recipients will be food insecure families, seniors and individuals with disabilities. Cook It Forward’s initial, two-month goal is 50,000 meals.

“It’s this whole restaurant ecosystem that they’re supporting,” says Klemme. “That was really, really important to us — to find a way to support the restaurant community.”

In addition to working with Cook It Forward, MFI purchased $100 gift cards from participating vendors. Anyone who donates to the give back campaign is automatically entered for a chance to win one. “It was just another thing we could do to support our vendors,” says Klemme.

Taste of Madison has a long history of quietly but consistently helping local nonprofits and charities. “Now we need everyone’s help to continue that.”