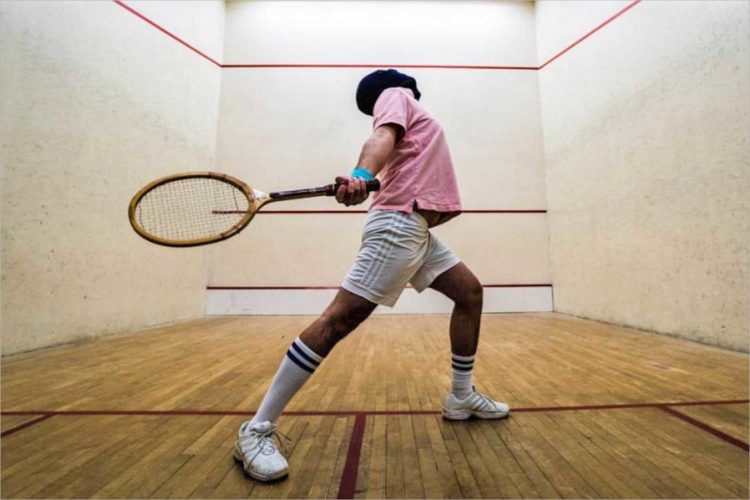 Imagine telling your friends you started a punk band based on a five-minute comedy sketch from 30 years ago. They might say to not quit your day job.

But when I called The Eradicator’s Andy Slania, who plays The Wisco on Oct. 4, he told me he’s done just that. Gone are the days of punching a clock. Slania recently took remote work so he can spend more time inhabiting the persona of a masked, squash-playing lunatic who happens to front one of the most joyously aggressive bands in hardcore punk.

“The character is abrasive,” says Slania. “It lends itself to being good subject matter for a band like this.”

A little bit on accident

For those not up on their Canadian cult comedies, “The Eradicator” was a character played by actor Bruce McCulloch on The Kids in the Hall. Clad in a black ski mask, he terrorized the squash league at his local athletic club. In the sketch’s opening moments, “The Eradicator” interrupts a business meeting to deliver a ball adorned with his skull and racquets logo to his next opponent, always punctuated with enthusiastically crying out his name.

“It happened a little bit on accident,” Slania says of The Eradicator’s beginnings. A veteran of Chicago’s punk scene and former member of Milwaukee’s Galactic Cannibal, Slania was between bands when he found himself wanting to work on something a little more lighthearted. And he couldn’t get Kids in the Hall off his mind.

“I wrote a song but didn’t have lyrics,” Slania recalls. “For some reason, The Eradicator sketch stuck out. The way he screamed ‘Eradicator’ seemed like it would be a good chorus. I thought it would be fun to write a song from his perspective.”

The character was fairly punk to begin with. From his menacing insignia to his balls-to-the-wall enthusiasm, The Eradicator represented a chaotic energy within the white-collar world. Slania simply paired this to the frenetic music he’d spent his life playing.

Slania has been The Eradicator since 2012, developing an entire mythology for a character that only made one brief appearance in 1989. Slania’s live band now features his old Galactic Cannibal bandmate Steve Maury and drummer Danny Walkowiak, both formerly of Direct Hit!. And given that the original sketch is only a few minutes long, he had to get creative when composing The Eradicator’s second full-length album, Peak Eradicator, out Oct. 4.

“There’s only so much you can unpack,” Slania says of the sketch. “Especially with the last album, I looked at elements of the character to try to see that if this person was real, what happened in life to get them to that point.”

With Peak Eradicator, Slania has crafted an album that’s equal parts self-empowerment and fan fiction. It deals less with The Eradicator’s actual antics and more with his worldview. How does one find their place in a world full of “pussheads”? Peak Eradicator standout “I’mma Be Me” sees the character claiming his stake not just in the local squash league, but in life in general.

On “You Know Too Much About Me Already,” Slania finds common ground with his admittedly goofy character. For both Slania and “The Eradicator,” the ski mask acts as a buffer between worlds, whether it’s racquet sports or punk rock.

“There’s an element of me shielding myself,” he says. “Part of the song is from the character’s perspective of trying to shield himself, and part of it is about me trying to shield myself from my coworkers, not letting them know what I do.”

Granted, Slania will now be spending less time around coworkers who might seek to unmask him. But then again, in the sketch The Eradicator would only reveal his true identity to the person who defeated him. And in the realm of hardcore, Slania and his goofball alter ego are still holding down the court.

The Eradicator will perform at The Wisco on Friday, Oct. 4, with headlining Chicagoland pop punks The Brokedowns, plus Pep Talk and Middle Aged Overdose.

Kids in the Hall, Music, Music Interviews, The Eradicator, The Wisco, TV