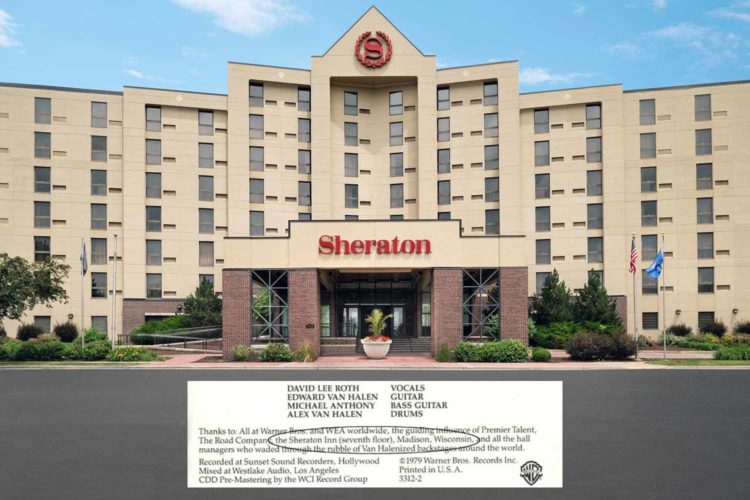 When Eddie Van Halen died last week, music fans around the world said goodbye to one of the greatest guitarists to ever do it.

As the founder of the legendary hard rock band that bears his and his drummer brother’s name, Van Halen, who was 65, was one of the few musicians to really change the game. You’d be hard-pressed to find anyone who picked up an electric guitar after 1978 — the year Van Halen the band’s self-titled debut was released — and wasn’t in some way influenced by the man. I mean, the entire Midwest emo genre is practically indebted to the pioneer of finger-tapping.

And speaking of the Midwest, there’s a bit of a Madison connection for Van Halen. More than a bit, actually. Eagle-eyed crate-diggers may have noticed the local Sheraton, specifically the hotel’s seventh floor, is thanked in the liner notes of the group’s 1979 sophomore album, Van Halen II. So why is that?

“I can still see it in my head”

In 1978, Van Halen was on the verge of a huge breakthrough. The Californians were on tour with Journey and Montrose (featuring eventual VH singer Sammy Hagar) and slated to play at the Orpheum Theater on March 7. However, the Orph apparently didn’t have enough room to host three bands, so Van Halen was axed from the lineup. This was a major bummer, because at the time Van Halen was arguably the hottest of those three bands; their cover of The Kinks’ “You Really Got Me” was seeing a ton of radio play.

The next stop on the tour was two days later in Milwaukee, meaning the band would be staying overnight in Madison. Looking to cash in on Van Halen Fever, local music journalists — including rock writer Susan Masino — and the band’s record company got the quartet booked for a secret show at a 500-capacity, Beltline-adjacent club called The Shuffle Inn.

“Seeing Eddie for the first time; I heard him on the record and I was like ‘This is unbelievable,’” Masino says. “I wondered if he could play like that on stage. And he was amazing. I’ll never forget it. I can still see it in my head.”

The gig was as much a party as you’d expect, complete with frontman David Lee Roth spraying the crowd with champagne. Their reputation was always that of a party band, and they proved this the next night at the Sheraton with a party so wild they thanked the hotel in the liner notes on their next album.

“That was just the way they were”

Hell hath no fury like a rock band with a day off in the ’70s. The party after The Shuffle Inn gig was a blast, replete with a local journalist shutting her head in an elevator door with Alex Van Halen. But it was the next night when they had nothing better to do that shit really popped off.

There have been conflicting reports and exaggerations about what happened, but ex-Van Halen roadie Tom Broderick is probably the best source. Broderick says they spent the evening spraying each other with fire extinguishers and throwing furniture out the windows. At one point, Journey singer Steve Perry had to talk Alex out of pushing a table out his window into the snow below. (Ironically, Van Halen would later blame the incident on Journey.)

My personal favorite anecdote involves Alex and Roth breaking into Eddie’s hotel room and throwing all his furniture outside. To retaliate, Eddie went to the front desk and told the clerk his name was David Lee Roth and he had lost his key. He then went to the singer’s room and commandeered all of his furniture for his own room.

At the time, Sheraton management was not happy with the young rock band. But things have a way of changing over time. Now we know Van Halen is one of the most iconic, beloved acts in the history of rock. So it should come as no surprise a lounge on the Madison hotel’s seventh floor is dubbed the “Roth Room,” a commemorative tip of the cap to the band’s own thank you. Even so, Van Halen members received a lifetime ban from all Sheraton properties.

“It was insane but that was just the way they were,” Masino says. “That was Van Halen.”