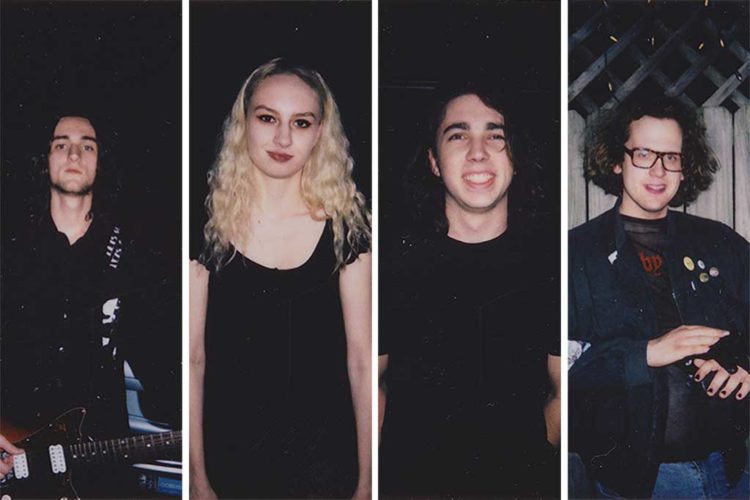 For their first year together, Madison goth rockers Wash have gotten by with a little help from their friends.

The band — which opens for black midi at the Memorial Union Terrace on July 23 — initially shared a practice with Miyha, whose drummer Erik Fredine helped Wash book their first shows. Bobby Hussy released their debut EP Ritual on his label No Coast. (“This is THEE band to watch in 2019,” he said in a December post on his personal Facebook page.) And they just got back from a co-headlining tour with Parsing that took them across the Midwest.

When they began playing shows over a year ago, Wash was still pretty green. Like, “barely enough time to get songs together” green. Old friends Alexandria Ortgiesen, Indigo Smith-Oles and Alex Kaiser had just started jamming with scene vet Adam Flottmeyer when they debuted live. And though they had only recently met him, it was bassist Flottmeyer who helped the young band integrate into the local music community.

“He’s more comfortable interacting with people in the scene,” guitarist Smith-Oles told me when I met the band (sans Flottmeyer) at Mother Fool’s this week. His presence was invaluable for Wash, who at the time were still trying to get their bearings. It all happened so fast that they didn’t really get to fully figure themselves out.

“We haven’t had much time to write music,” says singer and guitarist Ortgiesen. “Depending on the show, we’ll just play our old songs. And then when we do have the time to practice, we have to be working on the old songs. We can’t really be writing because it can be a long process.”

That’s not to say they aren’t grateful, as Kaiser — Wash’s drummer — is quick to point out. Catching on like they did was invaluable for Wash. But it did hinder the quartet’s ability to discover what Wash could really be. Now, things are starting to come together. It might have been hard to find time to write new songs, but that hasn’t stopped the band from doing it.

“We have five or six songs ready to record, which is what we’re going to do during the fall,” says Kaiser. Wash is planning a short break this autumn to work on music Ortgiesen described as having a heavier shoegaze influence and more lyrical themes than Ritual.

“Our goal is to have another EP or LP done by winter or spring,” she adds. “We’ll take the fall to work on coming into our sound and defining it more. Taking that time that we didn’t have in the beginning to figure out what we’re going to do. So this is definitely a transitional period for us.”

Wherever it takes them, I can’t wait to rejoin them on the ride.

Wash will open for black midi at the Memorial Union Terrace on Tuesday, July 23.