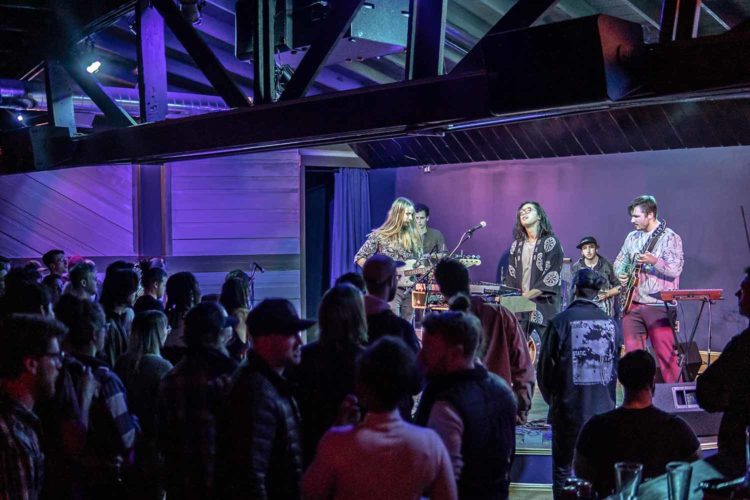 After a soft opening in February, The Winnebago — the new restaurant, cafe, bar and music venue on the east side — is fully operational and rolling out an eclectic mix of musical acts each weekend.

The Bozho recently sat down for a Q&A with Jake DeHaven, who spent about six months remodeling the former Norway Center with his brother, John, and a team of friends: Tori Vancil, Judy Coster, Justin Brown, Evan Nelson and Bennett Kanhai. Jake, who has a background in residential construction, says he’s still getting the hang of managing and promoting a music venue.

“I’m shocked at how important social media presence is for customers these days,” he says. “I’m trying to stay on top of the events at The Winnebago, the Facebook messenger, the Instagram messenger. We’re still very much learning.”

The Winnebago has an open call for performers of all stripes, from musicians to comedians and burlesque dancers to theater troupes. Performers are encouraged to fill out the online form to be considered for a booking.

As a music venue, will the Winnebago emphasize local or touring bands, or both?

Jake DeHaven: Luckily, we’ve had some regional touring acts reach out through our online forum. Our capacity is 99, so it’s definitely a smaller niche of touring acts that want to play a 99 club. The only reason for that is our parking lot; we don’t have enough parking. We’re working hard to negotiate around that.

Do you have a long-term plan or overarching philosophy on the bands you’ll book?

Wednesdays are going to remain a constant. We’ll work in sort of a residency format, starting with David Cooper, who is a music director at UW-Platteville and a Madison Symphony participant. He’s going to curate a chamber series with jazz and string quartets or trios. We’re talking about doing a Tuesday night open mic, so that will be another constant. Those are the deliberate decisions, and then Thursday, Friday, Saturday will be like any other venue — we’ll have whatever is most exciting that weekend. And we do have the flexibility to do theater.

So you’re open to a wide variety of performance artists, not just musicians?

We went back and forth with this stage design. We’re giving up over a third of the dining room floor space to the stage and the backstages, but we really didn’t know how else to do it and accommodate drag and burlesque and theater. That’s something we saw as kind of a void. There are a lot of places with a stage, and a lot of places with maybe a hospitality room in the basement, but with theater you need stage left, stage right. We do have something on the books for the end of May, a local theater company called Are We Delicious?.

Do you want The Winnebago to foster a greater sense of community in the neighborhood?

There are four separate but related arms of this concept — the food, the bar, the cafe and the music venue — and I think the only way we could tackle all of that is to open it up to a cooperative model, to have as many ideas as possible brought to the table. The questions, at the beginning, were, ‘How can we do this? Is this even feasible to accomplish?’ We decided it was going to have to work as a cooperative.

Do you ever feel like you bit off more than you can chew?

Definitely, I’ve had a few nights that were just anxiety-ridden. We were looking for a tiny cafe where we could put a tiny stage in the corner, and then this thing came up [for sale]. There was a drop-ceiling in here with acoustic ceiling tile, about nine feet tall. It was just a big, square room with ’60s wall paneling. Everything was bricked over. It felt like a church basement. The defining moment came when we got a ladder and popped our heads up into the ceiling and saw the rounded ceiling. It was like, ‘OK, this might be a perfect music venue.’ It was in total disrepair. There were 13 active leaks in the roof and over 10 foundational compromises, but it had beautiful bones. It had to be a music venue; it’s too big to be just a cafe. Honestly, this wasn’t the vision before we bought the building. It was astoundingly different.

How does it feel to have the construction phase completed?

There were a lot of nights of frustration in here, but it came together in a way I think we’re satisfied with. There are things we would have changed. I’ve never taken on a building of this occupancy type. The girth of my experience is in residential, and so there’s a lot of reading and a lot of research that went into building codes. There’s so much nuanced dimensional and infrastructural law associated with how you curate a building. That was a learning curve, and it was just us and our friends. It was slow. There wasn’t a hyper-professionalism about the process, but it was the best construction project I’ve ever been a part of, from a camaraderie standpoint. It was great.

Did you give any thought to unplugging — not offering wi-fi, and generally discouraging using technology?

Yeah, totally. It wasn’t as long of a discussion as I thought it might be. John was the one pushing for no wi-fi. With as big of a dining space as we have, we saw it as being attractive to people who work from home and just want to get out and have a cup of coffee. That was the main reason.

Is it difficult getting the word out about your new venue?

We don’t have as big of a reach in the community as we should for a space like this. We need to focus on branching out. We’ve got to be constantly getting out of our comfort zone, constantly meeting new people who are artists in their own way.

Do you feel like you’re in a unique position among local venues?

We’re in a weird sort of middle ground. We’re not a bar with an eight-inch acrylic stage asking bands to bring their own sound system. That’s not what we are. But we’re also not like FPC Live where they’ve got a team of eight people who are constantly doing promotions and sponsoring Facebook ads. We have services and infrastructure to support a band. They can just show up, and that’s different than just a bar venue.

Do you see The Winnebago as a community space that could potentially outlast you?

Philosophically, this building will probably evolve in terms of the resources it provides for the next 30 to 50 years. Different people will be operating it, and they’ll have their own concepts.