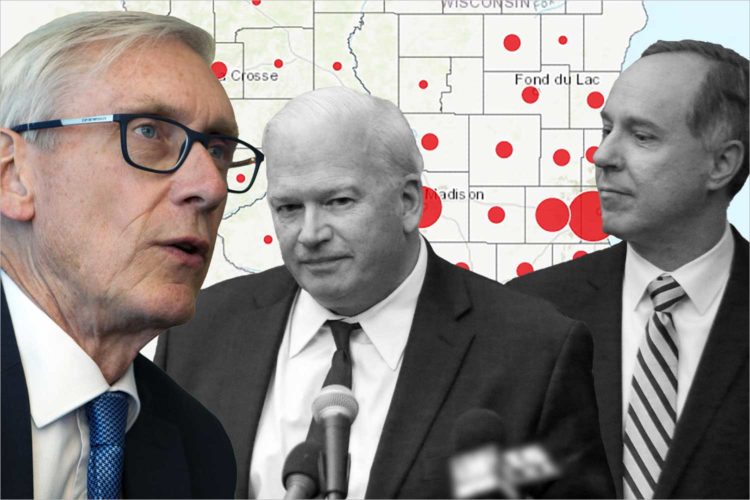 The Supreme Courts of the United States and the state of Wisconsin conspired on Monday to condemn hundreds of thousands of Wisconsinites to make the Sophie’s choice of their health or their voting rights.

The decisions came after Gov. Tony Evers attempted to postpone Tuesday’s election by executive order due to widespread concerns (and nationwide criticism) about voters risking exposure to COVID-19. The gubernatorial order came after the state’s Republican majority repeatedly refused to prioritize public health over political gain.

The primary upshot of the whiplash of yesterday’s news surrounding our election — on to off to on again — is the cravenness and corruption in which the state Republican Party has wrapped itself. In Wisconsin (as elsewhere), the GOP has been vocal about how reducing voter participation in elections is beneficial to them. This is why they obsess over implementing aggressive voter suppression tactics like requiring ID and limiting early voting. (It’s worth remembering that Democrats won 53% of the Assembly vote in 2018 but captured only 36% of the seats.)

Trump: “The things they had in there were crazy. They had levels of voting, that if you ever agreed to it you’d never have a Republican elected in this country again.” pic.twitter.com/x5HmX6uogo

Ironically, a year and a half ago, Republicans were talking about moving this spring’s primary to a different date to decouple it from the state Supreme Court election. Back then, Senate Majority Leader Scott Fitzgerald explicitly said the reason for doing so would be for fewer people to show up to vote in the Supreme Court election, thus boosting conservative Daniel Kelly’s chances at victory. Or in internet parlance, “Saying the quiet part loud.”

Their goal was always to decrease voting in this spring’s election, and the pandemic is poised to help them in that goal. The virus is hitting Democratic strongholds like Milwaukee especially hard, increasing the likelihood of a much lower turnout. A person forced to choose between risk of infection and disenfranchisement is of no consequence to them. If someone dies as a result — you, me, your kids, your grandparents — so be it.

Lines forming just 30 minutes after polls open in Milwaukee, people trying to space. Almost everyone has a mask pic.twitter.com/KVCJ7Ik0Xe

The governor was needlessly timid

For his part, Gov. Evers led from behind on this issue. Up until late last week, he too was resisting calls — even from within his own party — to postpone the election. It’s now been 21 days since Evers ordered a ban on gatherings of 10 or more people and closed bars and restaurants. The governor had to have foreseen that polling sites, which require repeated person-to-person exchanges, would be a major public health risk.

My focus has been and will continue to be ensuring everyone has the opportunity to cast their ballot in the upcoming election. That’s why today I am calling on the Legislature to act to send an absentee ballot to every registered voter in Wisconsin. pic.twitter.com/39rXpZVmfK

This is not a Republican issue or a Democratic issue—this is an issue of democracy. I don’t care who gets the credit, I just want to make sure that everyone has the chance to vote this April. We don’t have time for politics—we have to get this done, folks.

While it’s laudable that he exercised his executive power yesterday, Evers should have been plainly making the case weeks ago for why the election needed to be delayed. Republican leadership — who claimed postponement to be their privilege rather than the governor’s — would have rebuffed Evers, but it’s possible that the state’s chief executive explaining to the public day after day, week after week, why postponing was necessary as a matter of public health could have shaped the media narrative and public opinion sufficiently enough to force the Republicans’ hand. This wasn’t really a case of “both sides being bad,” but rather of one side being absolutely toxic and evil and the other needlessly timid. It’s a crummy combination.

Remember how Republicans acted in this moment of crisis…

Republicans in Wisconsin are a minority faction wielding majority power. And this is thanks only to extreme gerrymandering, voter suppression and other tools that gut democracy. If the state had fair, free and, in this case, safe elections, they wouldn’t hold power. And since power is functionally the only governing interest that they recognize as legitimate anymore, the GOP legislature — led by Fitzgerald and Assembly Speaker Robin Vos — will do whatever it takes to ensure that we don’t have fair, free and, in this case, safe elections.

Joint statement with @SenFitzgerald on the Wisconsin Supreme Court’s decision to overturn the governor’s order. This election will proceed as planned. pic.twitter.com/vbXUlqE8Yx

They are aided in this by the hopelessly corrupt, conservative-controlled state Supreme Court, which wasted little time yesterday overturning Evers’s order. This is the same court that ruled last year to allow the legislature — based upon explicitly partisan arguments — to radically restrict Evers’s gubernatorial power after he beat Scott Walker. And their majority includes Kelly, who is on the ballot, and other conservative justices who campaigned on his behalf and called his opponent unfit. They were never going to be impartial and were never going to prioritize the public interest. If you ever had confidence to the contrary, ever thought that this court would do the right thing, I have a bridge I’d like to sell you.

Wisconsin, get out and vote NOW for Justice Daniel Kelly. Protect your 2nd Amendment!

…and why local- and state-level elections matter so much

Local politics matter — and in this and future votes, I implore everyone to remember how Republicans acted in this moment of crisis. The Wisconsin GOP has all but told you that, so long as their political fortunes are enhanced, they don’t care if you get COVID-19, a virus that has killed nearly 80 people here so far and is currently hospitalizing more than a quarter of Wisconsinites who become infected.

As much as anything else in recent memory, this situation is a reminder of why local and state-level elections matter so much. Because of gerrymandering and the rest of the Republican anti-democratic tool kit, it will be a brutal, uphill climb to get them out of office. But the stakes are too high to not continue trying. It’s long been horrible to have people like Fitzgerald and Vos making decisions that impact all of us. Now it’s quite literally a matter of life and death.