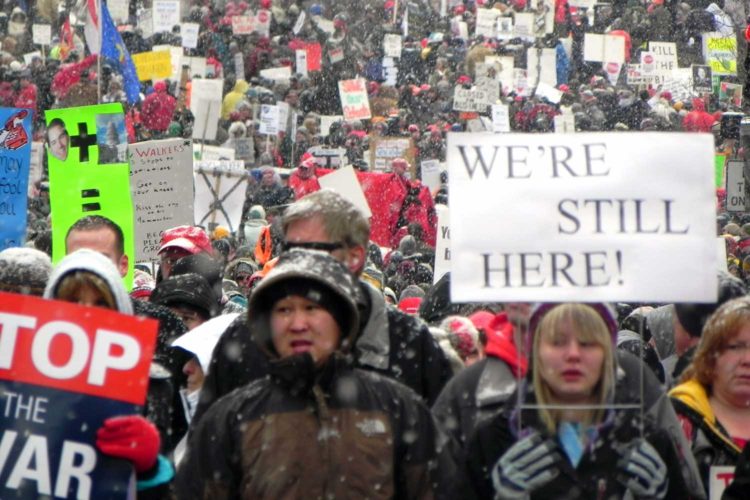 Earlier this month, Scott Walker announced his plan to run for a third term as governor of Wisconsin, probably because he realized that there’s still some good stuff out there that he hasn’t fucked up yet. Since taking office in 2010, Walker has defined himself by his ability to ruin pretty much everything he can get his hands on. Chief among those is the shitnado known as Act 10, a (sadly) career-making piece of legislation for Walker that gutted collective bargaining rights for public employees.

The effects of Act 10 can be seen everywhere ― but most achingly in Wisconsin’s public schools. A recent study by the Center for American Progress Action Fund shows that teachers have seen “lower pay [and] reduced health insurance and pension benefits” since Act 10 passed in 2011 and “higher turnover as educators hop from one district to another in search of raises.”

Benefits paid to Wisconsin teachers have dropped a staggering 21%, from about $28,000 at the time of the bill’s passing to an average of just under $22,000 last year. Today’s teachers are also less experienced: 10.5% of them just flat out left the profession after the 2010-11 school year, and the average exit rate (8.5%) remains higher than pre-Act 10 (6.4% in 2010). This is especially common in rural communities, where many young teachers will stick around for only a year or two before moving to a wealthier district for better pay.

With Act 10, those rural and often poorer schools have suffered, essentially creating a farm system for wealthier districts around the state, kinda like professional baseball. But unlike minor league baseball, which is wacky and enjoyable for the whole family, there’s nothing funny about what’s happening with Wisconsin’s public schools, which were once some of the most envied in the country.

This all comes as the U.S. Supreme Court is preparing to hear a landmark case that could result in a sort of national Act 10. Brought on by some probably Cubs fan named Mark Janus, the case concerns whether non-public sector union members can be required to pay “fair share” fees or if that’s a violation of their First Amendment rights. (Ron Howard voice: It’s not.) The result could be a nationwide disaster, crippling public sector unions and, in turn, workers.

You might not have kids now, but imagine what the state of the workforce will be in a decade or two. Would you want to hire them? What could they accomplish? What couldn’t they? Teachers take enough shit from parents already; they don’t need the state beating them down, too.