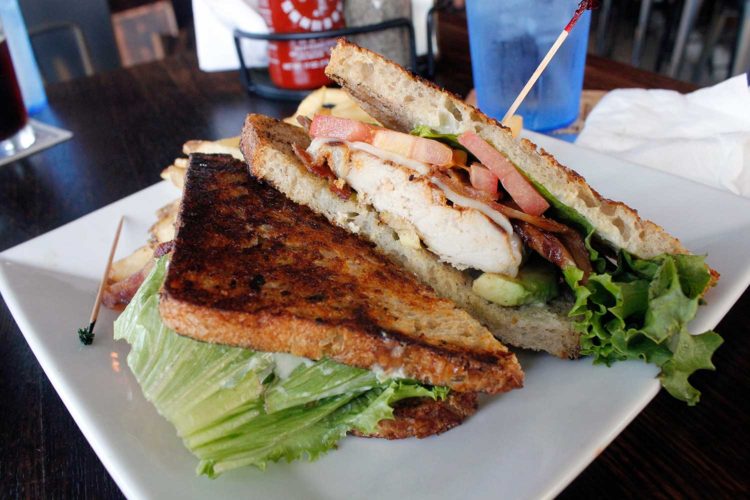 Why do some restaurants prioritize style over substance? It’s not a new trend, but it still baffles me every time I come across one. Restaurateurs build a shiny, bright, and yes, oftentimes gorgeous space, complete with reclaimed wood, statement light fixtures, and giant rolls of brown kraft paper on the walls for the curlicue written daily specials. There’s always a skinny, red-bearded hipster behind the bar, whose shirt with tiny embroidered horses is just as much part of the scenery as the rows of artisanal bitters on the wall.

The problem with these hip, often gentrifying spots is all that attention to detail that goes into creating the space must then shift focus to the food. A restaurant cannot hide behind good design. Surely the chef must have pored over every detail of the menu as well, refining it and ensuring that the line cooks know how to execute plates and flavors that compare to the beauty of the space, right? In my experience, that’s rarely the case. Bear & Bottle was no exception.

The menu concept is intriguing, if a little confused: California cuisine with a heavy Mexican influence. So much influence, in fact, that there’s a section of the menu dedicated to tacos. That seemed like a great place to start. Our server, who was very attentive, bubbly and the bright spot of our visit, had no problem putting the tacos in as an appetizer. I get irrationally excited about tacos, but these carnitas were insipid. Pickled jalapeños were the dominant flavor, which would have been fine if these were ballpark nachos instead of $2.80 tacos. Bland, liquidy shredded pork led to a full collapse of the thin corn tortillas before we even picked them up to eat. Have you ever heard of double-wrapping tacos, Bear & Bottle? You should really get on that.

Things just went downhill from there. On paper, the house burger sounds quite promising with Knoche’s beef (no indication of size is listed), sharp cheddar, bacon, spicy tomato jam, onion strings and arugula. In execution, it was dismal. Our server asked how we’d like the burger cooked — always a good sign — and medium was requested. What came out was a hockey puck of beef, both in size and color. Wisconsin restaurants have a tendency to overcook burgers, but this went way beyond well done to the point of bitter, blackened, crunchy beef on one side. Bacon lacked much flavor besides generic sweetness, and stuck out in long strips so we had to reconstruct it for eating. Onion strings were mushy because they got smashed under the patty and in the tomato jam, which was neither spicy nor jammy. The super soft bun fell apart. The whole thing was an affront to the poor cow that lost its life and sadly ended up in this kitchen.

Again, a California chicken club had all the right elements, but was head-scratchingly constructed. One thick chicken breast — which was supposedly smoked, but offered zero flavor of such — was plopped in the middle of bread slices that were twice its size. One half of the sandwich had hardly any chicken and a ton of avocado, the other half was the opposite. Who looks at a tear-shaped chicken breast and a square piece of bread and says, “Yep, perfect fit”? Butterfly the breast, slice it, even shred it. The solutions to this problem are numerous, but apparently the kitchen didn’t see it as a problem at all. On top of that, the tomatoes were white, the bacon was still sweet, and the rosemary bread, while delicious, overpowered the entire sandwich.

I want to say, “Hey, maybe we just ordered the wrong things.” But if you have to say that about a restaurant at all, then there’s something bigger going on. A restaurant can have standout dishes, but not to the detriment of the rest of the menu. I did not find any standouts here (even the frozen fries were stale and underseasoned), but they may exist.

There is reason to come here, though. The atmosphere is lovely, bright and even a little beachy. You can tell the space itself is where most of the attention was focused. Glass garage doors open to the patio, making this a great spot to grab a drink in summer. The beer list is unique for the area, with many west coast brews and a handful of local favorites. Signature cocktails are relatively simple and lean towards fruity and sweet. And as mentioned, service was on point. If you temper your expectations on the food — or if you happen to find a standout dish — then maybe you’ll be able to appreciate Bear & Bottle’s substance and style.