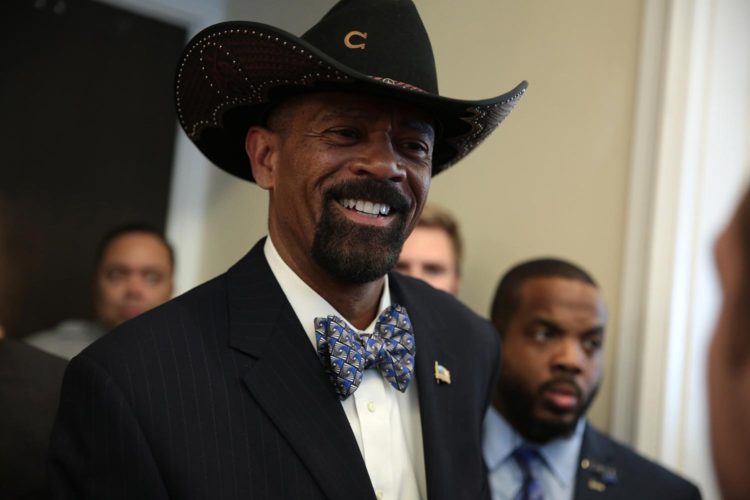 With the whirlwind of news out of Washington this week, it’s looking more and more like the Trump train has left the tracks entirely, defied the laws of physics and hurled itself directly into the sun. But that’s not stopping Donald Trump from trying to be presidential — in this case, filling one of the many openings still scattered around the various cabinet departments.

David Clarke, the controversial sheriff of Milwaukee County, yesterday told conservative radio host Vicki McKenna that he’ll be leaving his current gig to join the Department of Homeland Security’s Office of Partnership and Engagement, where he’ll serve as a liaison to state, local and tribal law enforcement and governments.

This is good news for residents of Milwaukee County, who seem to have grown tired of Sheriff Clarke’s, shall we say, colorful persona. A January poll showed that a scant 31% of Milwaukee County voters approved of Clarke, who’s been criticized for spending the majority of his time traveling the country for speaking engagements rather than engaging himself in the department. And that doesn’t even begin to cover the lawsuit Clarke’s currently embroiled in over the death of an inmate who was denied water (yes, water) for seven days in one of the Sheriff’s jails.

Clarke has been a longtime supporter of Trump, speaking frequently for him on the campaign trail. He’s also been known to deal out the hottest of hot takes, like his theory that Black Lives Matter activists are going to join forces with ISIS to destroy America, which is confusing given that the sheriff himself is black. There’s also that time he called for the suspension of habeas corpus to justify his baseless claim that millions of Americans are aiding ISIS and should be jailed at Guantanamo Bay indefinitely (dude’s got a real fixation on ISIS).

And that doesn’t even broach Clarke’s lack of qualification. He’s a proud authoritarian who once threatened to kill a man — using the Milwaukee County Sheriff’s Department’s official Facebook account — for shaking his head at Clarke. For a guy who loves calling people “snowflakes,” that’s an incredibly snowflake-y thing to do, much like threatening to beat up reporters who call bullshit on him (kudos to Milwaukee Record for finding the humor in this vile, terrifying man). And though Clarke has held his position since 2002, it’s not entirely clear that he’s any good at it. Aside from the whole “depriving an inmate of water” thing, Clarke’s department has also been accused of forcing a woman to give birth in shackles and causing the death of an unborn child due to neglect.

But, nevertheless, Clarke announced that he’s “both honored and humbled” to be working in the Trump administration. And I think I speak not just for Milwaukee County, but for much of Wisconsin when I say, “Good for you, Sheriff Snowflake. Now take your stupid hat, glued-on felt goatee and fake medals and kindly get the fuck out.”