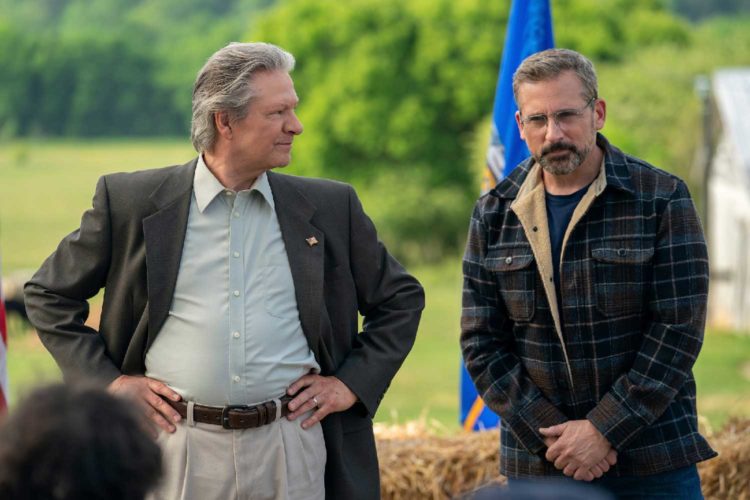 Once upon a time, Jon Stewart was the voice of American discontent. As host of The Daily Show, the comedian made his name by speaking hilarious truth to power. His 2004 Crossfire appearance is the stuff of legend. So when it was announced that Stewart would write and direct a Wisconsin-set political comedy starring his old Daily Show colleague Steve Carell, my hopes were understandably high.

But that pedigree is what makes Irresistible so frustrating.

Currently available on demand though platforms like Amazon, Apple and YouTube, the film stars Carell as Gary Zimmer, a prickly Democratic operative searching for hope after the 2016 election. He finds one in Col. Jack Hastings (a typically stoic Chris Cooper), a Wisconsin farmer and Marine vet who goes viral after giving a fiery speech defending immigrants at a town meeting. Zimmer travels to Deerlaken, Hastings’ fictional town, to convince him to run for mayor, thus providing a new salt-of-the-earth hope for the party.

Irresistible is full of miscalculations, the most glaring of which is that it never finds its tone. It’s part-Mr. Smith Goes to Washington’s earnestness and part-The Ides of March’s icy cynicism, all delivered through a voice that’s at times shockingly condescending. Perhaps its closest comparison is 2015 Oscar winner The Big Short, which also aimed high but couldn’t quite shake its know-it-all vibe (and also happened to co-star Carell).

Stewart was a firebrand at one point, but the 57-year-old’s time away from the Daily Show desk may have tempered him. Irresistible feels like a movie made by a rich, white liberal, which makes sense because it’s what Stewart is. And he might be aware of this; the movie’s big twist ending seems like a begrudging acknowledgment that the plucky heartlanders may not be so dumb after all.

A valiant attempt at a save, sure. But it’s also probably my biggest gripe with Irresistible: it completely whiffs on depicting small-town life. The locals are so committed to the ruse that they seem to lose their personality in the process. They are smart and capable — especially Hastings’ diplomatic daughter Diana, played by the criminally underrated Mackenzie Davis — but spend so much time playing the rube that the audience can’t help but take that away from the film. It’s a glaring “ope” which causes Irresistible to lose its already minimal levels of warmth.

One thing Stewart does get right: the contempt for Madison many folks from outside the city have. When Gary says he’s spent some time here, local barflies laugh and tell him it’s “not Wisconsin.” Sound familiar?

For research, Stewart toured the state with UW-Madison professor Kathy Cramer. She wrote The Politics of Resentment, a book about rural Wisconsinites’ political misgivings that heavily inspired Stewart to make Irresistible, which was produced in Georgia (tax credits, man!). So he’s met the people he wants to depict, but sidelines their composites in favor of a supremely unlikable Carell character who struggles to anchor the film. A stronger choice for a lead would have been Davis, whose Diana character is drawn as AOC in coveralls. I’d watch that movie, though to be fair I’d watch anything with Davis — you all saw “San Junipero,” right?

Jon Stewart is an influential figure not just in comedy, but American culture in general. He was the court jester, taking glee in calling out bullshit. However, his maddeningly uneven Irresistible aims for progressive satire but lands somewhere in the middle, tethered to a two-party system it seems unable to bury no matter how hard it tries.

Perhaps Deerlaken’s priest summed it up best: “What a clusterfuck.”