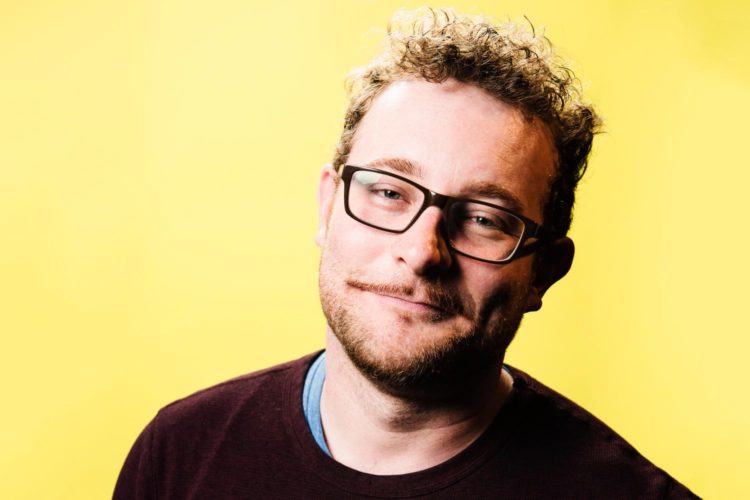 To know James Adomian is to know a million different people. The stand-up comedian is widely praised for his cadre of impressions (which included a lengthy stint playing George W. Bush on The Late Late Show with Craig Ferguson) and frequent appearances on cult comedy podcasts like Comedy Bang! Bang!.

Silly voices aside, Adomian is an accomplished performer. The 37-year-old was a top 10 finalist on Last Comic Standing in 2010 and released an album, Low Hangin Fruit, in 2012. Recently, Adomian toured the country with fellow comic Anthony Atamaniuk, playing Bernie Sanders to Atamaniuk’s Donald Trump in the comedy debate show Trump vs. Bernie, a spur-of-the-moment act that went on to spawn an @midnight appearance, two specials on Fusion and an international tour.

In advance of his three-night run at the Comedy Club on State this weekend, Adomian chatted with The Bozho about the importance of “giggling at dark shit.” And then Jesse Ventura showed up.

You’re doing five shows in Madison across three nights. What can audiences expect?
A lot of people know me from doing characters on podcasts and various other places, but I’m performing as myself. I’m hitting through a bunch of stuff I want to talk about. I’ll be doing some impressions that I think are fun to do. I’ll be talking about my life, things that interest me, whether they’re gay things or political things or crazy voices or just something I’ve seen on TV that makes me giggle.

You’ve touched on some dark shit in your stand-up in the past. How do you find the humor in that darker material without it just being relentlessly, soul-crushingly heavy?
I do, I like to giggle at dark shit. I did Trump vs. Bernie all last year, just doing what I’ve always done, which is making fun of people who are powerful and sort of celebrating the people who are doing something good, whether they’re aware of it or not. And I think that’s how you handle bad times. You celebrate the good people, and you shit on the bad people. I mean, I’m doing a somewhat insane comedy show. You have to touch on dark stuff, because that’s the world it’s reflecting. My job is to present a sort-of fun house, bizarro version of reality. That becomes more difficult as the world becomes more bizarro, but I think people need to laugh.

Did you have any indication that the 2016 election was going to turn out the way it did, or were you just as blindsided as the rest of us?
Tony Atamaniuk and I kind of picked the Trump and Bernie thing at random. I was going to be in New York, and we thought, “Hey, let’s do this kind of fun, crazy thing as a one-off.” Turns out, we filmed it, the video blew up on YouTube, and then everyone was clamoring for us to do more shows, and that turned into the Trump vs. Bernie tour. I guess it was like nine months, from like October to July.

It was so much fun, and it was a whirlwind because most of it wasn’t planned. We had no idea if Trump or Bernie would get knocked out of the race. We were glued to the news as we were on the road. We did Madison early on, and then a different city each night in those early weeks of 2016. We were mirroring the primaries as they moved on through the country, shadowing them as best as we could. But we didn’t know how things were going to go down. It was very much touch-and-go. It was a crazy process, and there was not much planning, but luckily Tony and I are both improvisers so we could handle it.

Lastly, I wanted to ask about another politician you’re known for playing. What do you think Jesse Ventura would say about the current state of affairs?
(as Ventura) I saw this comin’ 15 years ago, and I said it then. What this country needs is a three-party system. The people of Wisconsin, maybe you don’t get it. But just walk to the border, look over with binoculars, and see the Shangri-La that’s happening in Minnesota. Just because we have a third party doesn’t mean we can’t compete.