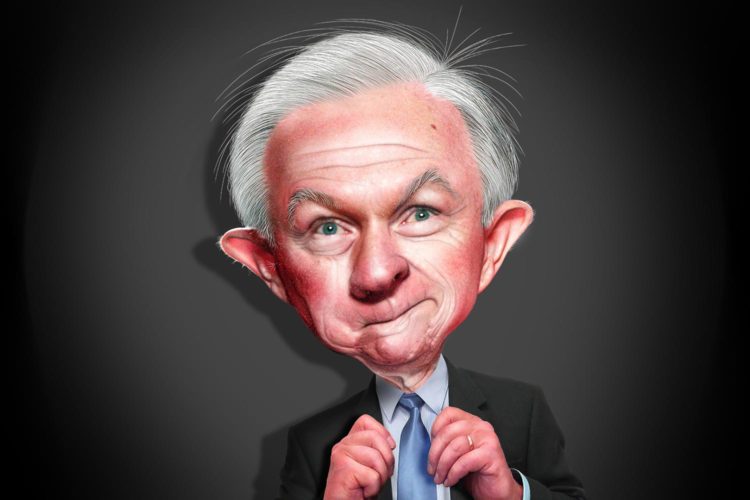 Jeff Sessions, the man who became U.S. Attorney General after lying to Congress, has been a controversial figure in the last 100+ days. As the chief law enforcement officer in the United States, the former U.S. senator from Alabama is possibly the most influential pick of President Trump’s Cabinet. Unfortunately, he is also the head of the Department of Justice, which is a lot of suing power if you’re a petty asshole.

According to HuffPost reporter Ryan Reilly, the DOJ prosecuted and today convicted activist Desiree Fairooz for laughing during Sessions’ confirmation hearing in January. The 61-year-old giggled audibly as Sen. Richard Shelby (R-AL) said Sessions’ history of “treating all Americans equally under the law is clear and well-documented,” which, to be fair, is pretty hilarious. The lie itself is so broad it could have almost escaped notice had Sen. Elizabeth Warren (D-MA) not been silenced on the Senate floor for attempting to read Coretta Scott King’s 1986 letter outing Sessions as a racist, launching 10,000 Etsy shops in the process.

Despite Fairooz claiming the laugh was involuntary and it not noticeably interfering with Shelby’s speech, she was prosecuted by the DOJ and found guilty this afternoon on two counts, “one for engaging in ‘disorderly or disruptive conduct’ with the intent to disrupt congressional proceedings,” writes Reilly, “and a separate count for parading, demonstrating or picketing.”

This outcome, and the charges themselves, raise disturbing questions about free speech in the Trump Era. In a country that functions on every level with the intrinsic right to criticize its elected officials — you know, a democracy — what impact could an administration this petty have on its chosen adversaries? And what about when those adversaries are women, whose criticism seems to hit a particular nerve? This climate brings to mind the old Margaret Atwoodism: “Men are afraid women will laugh at them. Women are afraid that men will kill them.” Sessions is capable of addressing the imaginary concern, but can we trust him to take on the real one? Spoiler alert: no.