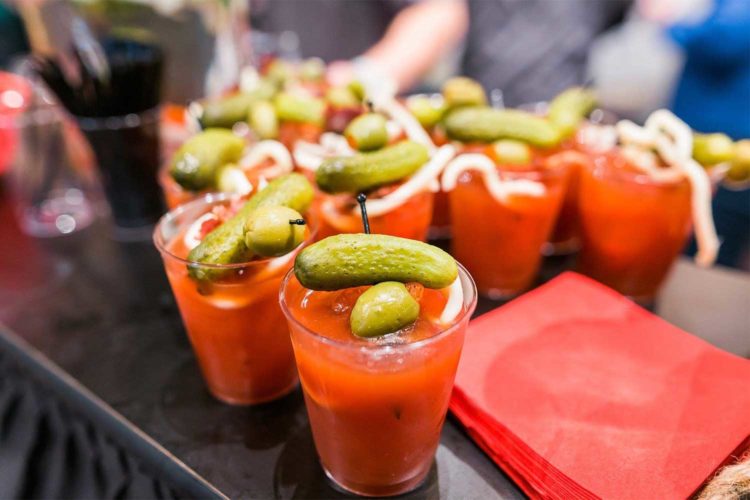 A bloody mary tasting event and competition is back for its second year. Madison’s Best Bloody is a charitable fundraiser for the Great Lakes Hemophilia Foundation, a non-profit whose mission is to educate, support and advocate for the bleeding disorders community of Wisconsin.

At the event, which will be held at The Edgewater on Sunday, April 28, you’ll get unlimited samples of bloody marys from participating local bars. They all bring their A-games with homemade tomato mixes, table decorations and fun garnishes. Last year, there were chunks of bratwurst, spicy cheese bread, beef sticks, plenty of pickles, and of course tons of cheese.

State Street Brats is back to defend their championship. Old reliables like Nitty Gritty and Cafe Hollander — each of which have very good bloodies — will also return. Newcomers this year include Tangent and Fuegos, with more to still be announced. If you enjoy a bar’s bloodies, be sure to patronize them afterward. They’re donating their time and money to help put on this charitable event.

Besides all the bloodies you can drink, a ticket gets you beer chaser tokens to redeem at the bar whenever you like. And because that’s a lot of alcohol, there’s also a substantial appetizer buffet. Expect items like chicken sliders, soft pretzels and cheese dip, and hummus with fixin’s. There’s ice water stations too, because hydration is important, people.

Raffles and other fundraising games will be held. The grand prize is the Buttload-o-Beer, which appears to contain at least eight cases of various alcoholic goodness.

Having attended last year’s event, I’ve got some tips for optimal bloody consumption. Hit up the bar with the best garnishes early. The longer you wait, the more likely there is to be a line. Make sure to use the little slips of paper with the bar’s name on it to keep track of what you’re drinking. (Muffin tins for easier carrying will be available to buy, or bring your own.) Once you’ve tried them all, don’t forget to vote for your favorite by dropping your token in their jar.

General admission tickets to Madison’s Best Bloody are $40. Tickets to the VIP section are $65 and include entrance to the event one hour early, a reserved seat in the VIP lounge and additional buffet. Anyone who isn’t drinking or is saintly enough to volunteer as the designated driver can drink all the non-alcoholic bloodies they want and partake in the buffet for $15. The event starts at 11:30 a.m. (10:30 for VIP ticket holders) and ends at 3 p.m. You must be 21 or older to attend.

Let’s hope the weather is as beautiful as it was last year, because the Edgewater’s patio on the lake is fantastic for soaking up spring sun. I’ll be there trying not to spill bloodies on my Bozho t-shirt, so say hi if you see me!