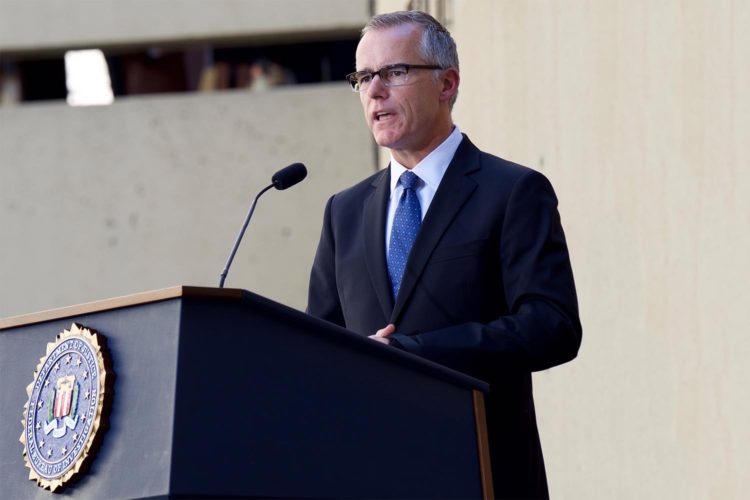 It was another busy weekend on the set of American President.

On Friday night, former FBI Deputy Director and stone-cold silver fox Andrew McCabe was fired less than 48 hours before he was set to retire. The details behind McCabe’s firing are still somewhat hazy, with the administration once again crying “Clinton” and “leaks.”

Andrew McCabe FIRED, a great day for the hard working men and women of the FBI – A great day for Democracy. Sanctimonious James Comey was his boss and made McCabe look like a choirboy. He knew all about the lies and corruption going on at the highest levels of the FBI!

Many see McCabe’s firing for what it is, which is a shockingly bold escalation of President Regina George’s attacks on the FBI and other institutions of U.S. law enforcement. (This weekend also included a series of tweets about Special Counsel Robert Mueller that have led many to believe Trump will fire him, too.) It’s also notable for its extreme pettiness, as A.G. Jeff Sessions let McCabe go less than 48 hours before the 21-year FBI vet’s pension was fully vested.

This too is unsurprising, as pettiness is a key component of the Trump brand. Never forget that President Diaper Baby has, on more than one occasion, mailed a golden tracing of his own hand to former Vanity Fair editor Graydon Carter whenever Carter would clown on Trump’s legendarily small hands.

And while Trump’s pettiness can be comical — at least, it was back when he was still a second-rate game show host — in this instance it’s cost a career FBI agent a much-deserved pension. But some on Capitol Hill are starting to see ways around that, chief among them our own congressman.

One suggestion from a McCabe supporter: if a friendly member of Congress hired him for a week he could possibly qualify for pension benefits by extending his service the extra days

Andrew call me. I could use a good two-day report on the biggest crime families in Washington, D.C. https://t.co/DYVP00Em0x

The idea behind this is that if McCabe works a couple of days in Congress, his pension will vest fully and his early benefits will remain in tact. And for his part, Pocan says it’s a “legitimate offer.”

“He deserves the full retirement that he has been promised,” Pocan said in a statement, “not to have it taken away as a result of the president’s political games.”

Lacking human decency is a major character flaw for @realDonaldTrump. The President is trying to send a message and derail the Mueller investigation by firing McCabe just days before his retirement. My offer stands to hire McCabe to ensure he receives his benefits.

McCabe has yet to accept Pocan’s job offer, but in the meantime The Bozho could certainly use a guy with your credentials writing about politics. DM me, Andy.