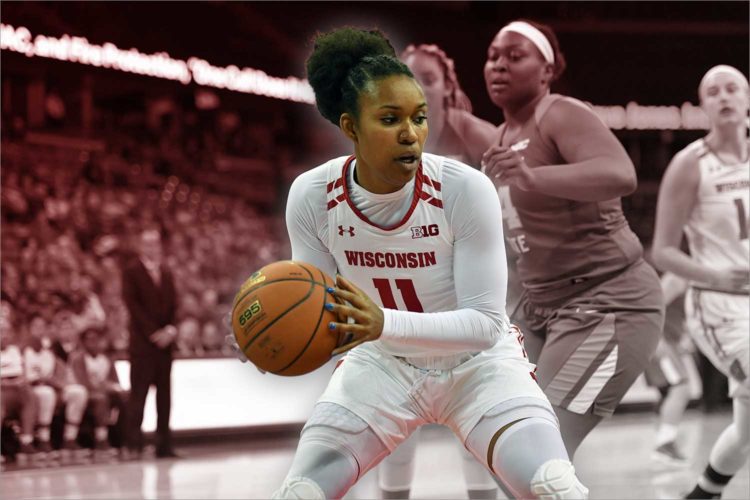 Marsha Howard is a dominant presence on the basketball court. The University of Wisconsin senior forward recently scored a career-high 30 points. She’s said that leadership is “glued to her personality,” and it shows. Not just through her basketball skills, either.

This season, Howard has spent the national anthem seated on the Badgers’ bench, her head bowed in silent prayer. Like NFL stars Colin Kaepernick and Eric Reid, among others, she hopes to add to an overdue conversation about race.

“I’m using my platform to raise awareness of injustice, inequality, and the blind spot of racism that still exists in today’s society,” Howard recently told ThinkProgress.

The idea came directly from Kaepernick’s protest in 2016, which Howard saw for the first time with a few other Badgers basketballers, including Nigel Hayes. The group resolved to protest at UW, hanging back with a small group of teammates as the anthem played. They joined a rapidly growing number of athletes nationwide in what was dubbed “The Kaepernick Effect.”

Last year, Howard stood in the tunnel with a teammate, then-senior Cayla McMorris, leading to an extra frothy tweet from Republican U.S. Senator Chuck Grassley after a game against the Iowa Hawkeyes:

This year, Howard has taken her stance alone, as she initially intended. The Chicago native hopes to make fans aware of the institutionalized racism she and other black students feel at UW, something that some Badgers fans prefer to sweep under the rug rather than face head on.

“Here at Wisconsin, there is an undertone to the disadvantage we have (compared) to everyone else,” Howard recently told the Chicago Tribune. “It’s not to say everyone on campus is of that nature. I’ve met a lot of people in class and people I’m proud to say I’ve met. But there are other people at Wisconsin who grew up differently and view people of color a certain way and have no fear of expressing that.”

So far, reactions to Howard’s protest have ranged from support to apathy. Wisconsin staff members told the Tribune that they haven’t heard anything negative from opposing crowds. But even so, Howard says she’d be undeterred.

“If this can make a change, I’ll be part of it. I never really thought about the negative backlash. I’m going to live in my truth. I’m going to speak up about things that are harming my culture and my people. I was OK with living in that light.”

After her playing career ends, Howard, a sociology major, hopes to become a social worker. It already seems like she’s going to be pretty good at it.