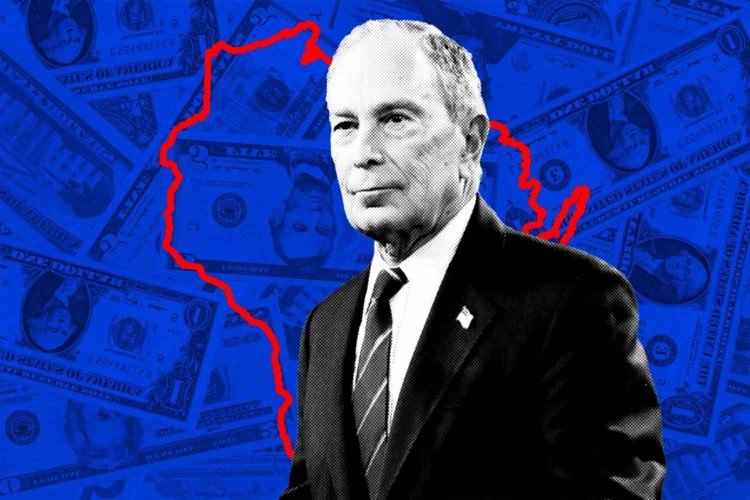 On Feb. 9, Madison played host to a two-time Oscar winner.

But actor Michael Douglas — star of Wall Street, Basic Instinct and more — wasn’t filming a new role. (Though if you slapped a mustache on him, he’d make a decent Paul Soglin.) Instead, Douglas was here to open up a campaign office for Democratic presidential candidate Mike Bloomberg.

Douglas claims even his legendary actor father Kirk, who died days earlier, had endorsed the former New York City mayor from his deathbed.

“I said, ‘Dad, Mike’s running. Mike is running and we’ve both known Mike Bloomberg forever,’” the 75-year-old told the event crowd. “I said Dad, ‘I’m all in.’ He gave me the thumbs up.”

It would make sense that Michael Douglas would vibe with Michael Bloomberg. They’re both very wealthy, older white guys from elite social circles. But support for Bloomberg seems to be growing throughout the country as the 78-year-old multi-billionaire uses his vast personal wealth for TV ad buys, meme campaigns and staff hiring frenzies.

A bunch of the biggest meme accounts on Instagram just shared posts that claim to be sponsored by @MikeBloomberg pic.twitter.com/pckRX7LWbx

Some on the left, including Bernie Sanders, see the Bloomberg campaign as a callous attempt to buy the presidential nomination. While Bloomberg may not be buying the nomination outright, he’s greatly stacked the deck in his own favor. And that’s only part of what makes him so problematic.

Donald Trump with a Harvard degree

For decades, Michael Bloomberg has been a force in American politics. He was New York’s first post-9/11 mayor. And before that, he founded Bloomberg L.P., an amorphous conglomerate that also houses a news service of the same name. (Which seems like a conflict of interest, but what do I know?) On paper, his credentials are solid — until you start looking a little further.

Take his mayoral career, for instance. Bloomberg was a lifelong Democrat who switched sides to run as a Republican. He became an independent in 2007 before winning a third mayoral term the next year (thanks to a change in New York City law that was his idea, btw). And then in 2018 he went back to the Democratic Party. While some may view the latter as a “come to Jesus” moment for Bloomberg, the more skeptical are sure to view this more cynically. Namely, that Bloomberg’s politics are less about ideals and more about just getting elected.

Unpacking the legacy of stop-and-frisk in New York under Mike Bloomberg. #BetweenTheScenes pic.twitter.com/xNhFlQoEuS

Likewise, for a guy the DNC seems ready to go all-in on, his political legacy is pretty fucking Republican. Bloomberg championed a “stop-and-frisk” policing policy that largely targeted persons of color. That’s not a hot take either; he outright said it. Bloomberg has a history of making disgusting, sexually explicit comments to women. He called farmers dumb. He’s basically Donald Trump with a Harvard business degree.

“Sixty billion dollars can buy you a lot of advertising, but it can’t erase your record,” fellow candidate Joe Biden said on NBC’s Meet the Press.

Unfortunately, that money goes a depressingly long way for Bloomberg, despite his past remarks.

“Bought and paid for”

If there’s one positive to Bloomberg’s campaign, it’s that his political ego trip isn’t costing regular people a cent. He’s spending entirely out of pocket, but on the flip side his wealth is so immense that he’s able to offer incentives other campaigns simply can’t.

Bloomberg is paying huge salaries to new staffers, with their jobs guaranteed through the election in November; even if he loses, he’s pledged part of his fortune to whomever ends up taking on Trump. Staffers also receive free iPhones and Mac laptops that they get keep should they stay onboard for the duration. (“I’m not saying I’m not bought and paid for,” one anonymous operative told Isthmus.)

This presents a problem for any campaign that’s not run by a billionaire who throws cash around like confetti. Wisconsin State Senator Chris Larson, currently a candidate for Milwaukee County Executive, last week told The Intercept that Wisconsin has a “bad case of the Bloombergs.” The state GOP holds a couple dozen more assembly seats than Democrats despite losing the 2018 popular vote by six points. So right now the only way around voter suppression and gerrymandering is to win by huge margins — and that’s hard to pull off when you’re hemorrhaging campaign workers because you can’t compete financially with Bloomberg’s wealth.

“I’ve heard from friends across the state who are affected by Bloomberg sweeping up managers and staff. It’s a tsunami of Bloomberg,” said John Rocco Calabrese, a Menomonie resident who’s running for state assembly. “He’ll have a rep at our County Dem meeting Thursday and even at a small County Board Spring Election fundraising event next Monday.”

It’s not so much that Bloomberg is trying to buy the nomination as he is trying to buy the entire process. It reeks of the same predatory form of capitalism that the ex-mayor — a former securities broker — spent his life benefitting from. And what’s especially unfortunate is that his lavish spending may overshadow his gross history. But in the United States, money speaks louder than outrage.

Perhaps Michael Douglas’ support is fitting. After all, it was his iconic Wall Street character Gordon Gekko who famously said, “Greed, for lack of a better word, is good.”