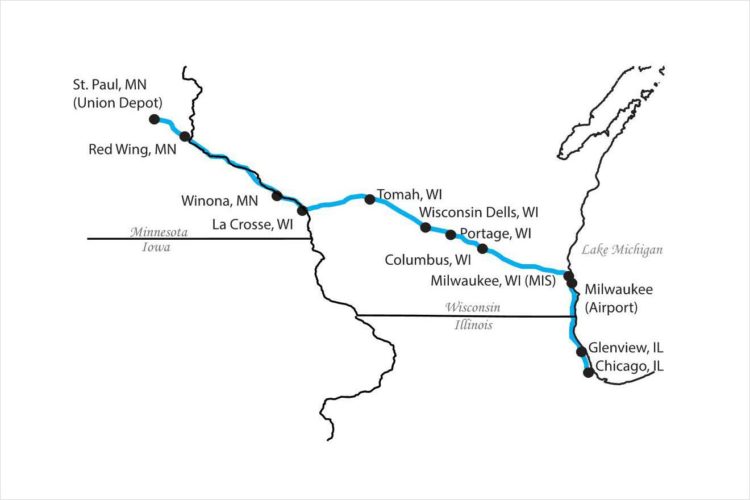 Awaken your inner four-year-old, readers, because we’re about to talk trains — specifically, the trains that run between Chicago and St. Paul. Did you know you can take an Amtrak from Chicago to St. Paul, with intermittent stops across Wisconsin? No shit! It’s part of a route that runs between Chicago and Seattle, meaning it only travels the Chicago-St. Paul stretch once a day.

In an effort to boost convenience and shave some time off the trip, the Minnesota Department of Transportation released a “purpose and need” statement last week for the Twin Cities-Milwaukee-Chicago Intercity Passenger Rail Service — or TCMC, for those of you who prefer not to spend entire weeks at a time saying the name of something.

The proposed project would add a second, shorter distance train to that pre-existing corridor, one that would run only from Chicago to St. Paul, making the same stops across the state as well as two in Milwaukee (downtown and at General Mitchell Airport).

Now, you’re maybe asking yourself, “Where does Madison fit in?”

Sadly, it doesn’t — but it should have. As if you needed any more reasons to be pissed off at Scott Walker, let me break it down for you. Back in 2010, when the Obama administration was hell-bent on growing rail travel in the country, they offered a whopping $810 million federal stimulus grant to the state of Wisconsin for the purpose of refurbishing a pre-existing freight rail line between Milwaukee and Madison, effectively extending to us the Amtrak Hiawatha route that runs between Chicago and Milwaukee.

But Walker turned it down, calling the project a “boondoggle.” The money went to other states, the line was never fixed up, and Wisconsin stuck with the same rail service it’s always had. So today, had Walker accepted the grant, we could potentially be discussing how to add high-speed rail service all over the state, rather than talking about adding another conventional-speed train that would continue to skip over the state’s second largest city, capital and flagship university (our nearest Amtrak station is in Columbus).

This is why we can’t have nice things.