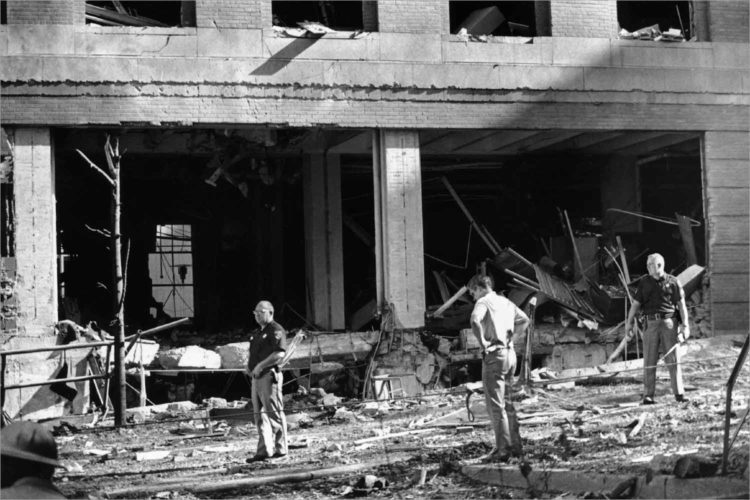 Last week marked the 50th anniversary of the Sterling Hall bombing. Although this event was considered the worst act of domestic terrorism until Oklahoma City in 1995, as the years go by it’s a piece of history that often goes unrecognized. But with the current political climate, including protests for racial justice, the Sterling Hall bombing has renewed relevance.

Let’s start with some historical context. In the summer of 1970, the U.S.’s involvement in the Vietnam War had been ongoing for five years. President Richard Nixon had recently begun his strategy of Vietnamization, a plan to bolster South Vietnamese forces in order to enable the gradual withdrawal of American troops.

Throughout the Vietnam War, there were hundreds of protests against U.S. involvement, and anti-war sentiments were strongly felt on college campuses across the country. During the 1960s, tension on the UW-Madison campus was palpable. Students were protesting a number of injustices, including lack of Black representation in class material, faculty, and the student body, an issue that continues today.

Three years prior to the Sterling Hall bombing, on Oct. 18, 1967, a peaceful protest on the UW-Madison campus turned violent when students opposing the Dow Chemical Company’s on-campus recruitment were forcibly removed from a campus building by the Madison Police Department. Dow was creating napalm that was being used by U.S. forces in Vietnam. The company had been recruiting and interviewing UW-Madison students for years, and tension on campus was at a peak.

Police officers showed up to the demonstration at what is now Ingraham Hall, with riot sticks and tear gas. Thousands of protestors and bystanders were involved in the event and dozens were injured, further bolstering student-led peace movements.

“Why was I gassed? I didn’t do anything but attend class,” recalled one alumnus in 2017. “After that day, I became politically active.”

After that peaceful protest was met with violent opposition, the tension on campus only continued. Some students involved in the event blamed protestors for the violence while others — like Karl and Dwight Armstrong, David Fine, and Leo Burt — only became more resolute in their support of the anti-war movement.

Sterling Hall is the home for many UW departments; today these include astronomy, gender and women’s Studies, and sociology. In 1970, the North Charter Street building was home to the physics department, where Robert Fassnacht and David Schuster were conducting postdoctoral and doctoral research experiments, respectively.

But Sterling Hall at the time was also home to the Army Mathematics Research Center, which occupied the second through fourth floors of the building.

“As soon as I arrived [from his native South Africa], I was struck by the fact that the building said ‘U.S. Army Math Research Center,’” says Dr. Schuster. “It made no sense that an army center should be on campus… It just seemed an anomaly; it wasn’t in the core vision of the university.”

Many students at UW-Madison felt the same way, including Karl Armstrong, Leo Burt and David Fine. Those three and Karl’s younger brother, Dwight Armstrong, comprised what they called the New Year’s Gang (so named after a failed bombing nearly nine months earlier).

Early on Aug. 24, 1970, Schuster was working the overnight shift on his research project, in the lower level of Sterling Hall, experimenting with the particle accelerator to look at neutron properties. The last thing he remembers is encountering Fassnacht speaking to someone in the hall on the way to his office. A few moments later, at 3:42 a.m., an explosion immediately knocked him unconscious.

The New Year’s Gang had stolen a van and filled it with ammonium nitrate and oil, creating and then detonating an incredibly powerful bomb. The physics department received the majority of the destruction, and a couple dozen nearby buildings were also damaged. The army research center, however, was largely unscathed.

“Eventually I felt myself awakening and it seemed like a crazy realistic dream,” Schuster recalls. “I was lying on my back in the dark covered with rubble and a ringing in my ears. There was water rising beneath me, and it made no sense. I drifted back into sleep or unconsciousness a few times, and eventually it became clear this was real.”

Robert Fassnacht, 33, was killed. The South Bend, Ind. native is survived by his wife — who was also a physics student — and three children.

Firefighters arrived and discovered that Schuster had been largely shielded from the blast by a supporting pillar of the building.

Schuster had suffered a broken shoulder and eardrum, leaving him with only partial hearing in one ear. He was one of three survivors, including postdoctoral physics researcher Paul Quin and university security officer Norbert Sutler. After the bombing, Schuster finished his research and returned to South Africa. He’s now an associate physics professor at Western Michigan University.

“The one persisting sadness about it for me is about Robert Fassnacht and the fact that he was killed,” says Schuster. “When I look back on it, it’s not really about me because I recovered. I survived. When I think about it, it’s always about Robert and his family and his work.”

The New Year’s Gang went into hiding. Over the next several years, Karl and Dwight Armstrong and David Fine were each eventually caught and sentenced to prison. But Leo Burt has never been found.

Protests on campus continued throughout the rest of the Vietnam War, and the Army Mathematics Research Center was discontinued by the end of 1970.

A political battleground: then and now

Madison has long served as a political battleground for all ends of the political spectrum. This was prevalent in the 1960s with the civil rights and antiwar protests, and now today with the Black Lives Matter movement.

Reflecting on his experience as a Sterling Hall bombing survivor and analyzing the current political atmosphere, David Schuster has some interesting insight. At the time of the Dow Chemical protests, Schuster was a black and white photographer and took pictures of the events.

“The role of the police should be to ensure that these [protests] go off peacefully, not to suppress them,” he says of civil unrest, both then and now. “Much of the violence arises once the police try to stop the protests and refuse to hear people out.”

He also sees the parallels between some of the violence that has been occurring during recent protests and what he himself experienced. Schuster says many people asked after the bombing if his experience led him to become opposed to the protests. He says no.

“That I happened to be directly involved and injured shouldn’t affect my overall analysis of the political situation. I just happen to be one person who lived.”

Schuster’s insight highlights an important distinction between a social cause and the violence that can be attached to it. “Protest movements and demonstrations are crucially important,” Schuster says. “Otherwise, those perspectives and those social movements have no affect.”

It’s important not to let the violent actions some people distract from the importance of the movement itself, and instead focus on the movement’s message — whether that’s the anti-war and civil rights protests of the 1960s and ’70s or the Black Lives Matter movement today.