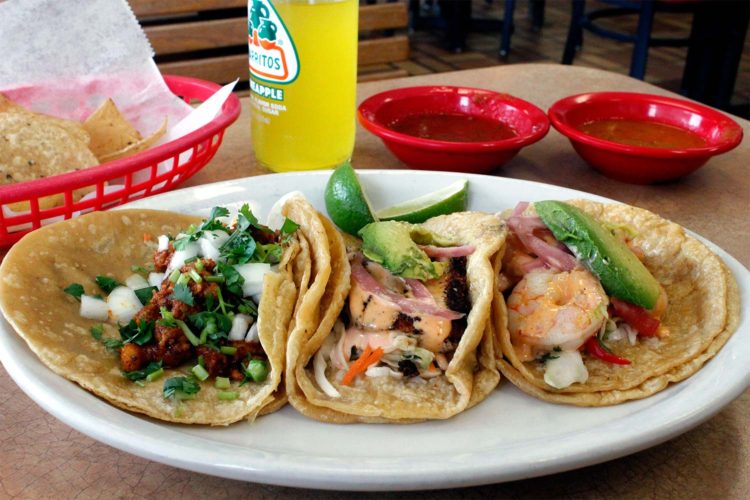 I’m a taco freak. I’m on a quest to eat as many tacos in Madison as I can, then tell you about them all. Know of a secret taqueria with the best cabeza or homemade tortillas? Tell me.

During a recent trip to the east side Woodman’s in search of cheap booze, I was distracted by the Mexican restaurant in the parking lot. The large building was a bit worn and had clearly started its life housing a different restaurant. There was a steady stream of customers going in and out of El Poblano, however, and that was all the encouragement I needed to get my taco on.

Blackened mahi: I planned on ordering the blackened tilapia, but the employee who took my order mentioned a blackened mahi special. It was an easy sell, because I’ll choose just about any fish over tilapia. The piece of fish was small and square, so I had to break it apart to spread it out in the taco evenly. The heavy blackening seasoning coated one side and had a smoky, rich flavor that went well with the pickled onions. I should have just ordered three of these.

Shrimp: The shrimp were pretty plain, either boiled or lightly sauteed. They were a decent size and left whole. That’s really all there is to report. Snooze fest.

Al pastor: Al pastor is my default taco filling. In this case, it was clear it did not come off of a spit, unfortunately. The small chunks of pork were tender, however, with very little fat or grease. The deep rusty color did not translate to a ton of flavor. No pineapple to be found, which is a travesty.

Doubled soft corn tortillas. By the time I got to my third taco, the tortillas burst open, though definitely not from being overstuffed or having juicy fillings. All tortilla integrity was lost, and I reverted to my fork.

All seafood tacos get the same treatment here: a fresh slaw mix of cabbage, carrots and red bell peppers, spicy mayonnaise, pickled red onion and avocado. Slaw added crunch and much needed bulk. Pickled red onions and an avocado slice added interest to the bland shrimp. Cilantro and white onion on the al pastor were fresh.

They have a self-serve salsa bar! I’m a salsa freak, so this was stupid exciting. But I soon found they only have two mediocre salsas: a red one with the standard canned tomato base, and an orange variety that was hotter and fruitier. Both could use more flavor. Chips were store bought.

Seafood tacos, including the blackened mahi special, for $2.99 each isn’t bad. Can’t really complain about al pastor for two bucks, even if it was pretty skimpy.

Service was particularly friendly, so they’re worth a shot, if for nothing else besides the blackened fish. Grab a freshly fried caramel filled churro for $1.75 on the way out.