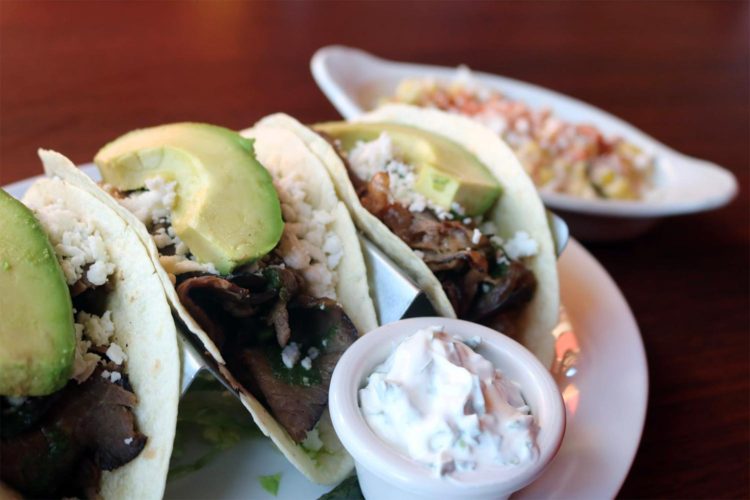 The drive to the hallowed ground of Lambeau can be long and boring, so you may as well use it as an excuse to try some new eats when you stop to stretch your legs. Scheduling in a little extra time on the way there allows you to get a good base meal in your stomach before you fill it with beer. And on the way home the next morning, nothing beats hot coffee and a huge hangover-beating breakfast. Here are some worthwhile stops on the way to Green Bay.

This is a family diner-style restaurant with a Mexican twist. If you’ve ever wanted a tamarind Jarritos soda or a Dos Equis with your steak and eggs, you can get it at Columbus Family Restaurant. There are five pages of breakfast items, including egg burritos, skillets and the usual pancakes. Ask for bottles of homemade salsa verde and hot sauce to liven up your eggs over easy. If you’ve got room for dessert, they’ve got a cake and pie case. They open at 6 a.m., so make this an early morning stop before a noon game.

Follow the neon sign pointing you to the door of the Capri Steak House in downtown Columbus for Sunday night dinner on your way home. It’s an old school supper club like your parents used to visit, complete with tufted vinyl chairs and a sprig of curly parsley garnish on every plate. Steaks are the way to go here, and they top out at around $30, including a couple sides and relish tray.

According to the front of the menu, Chili John’s was started in 1920 as a pool hall and eventually started serving food. It’s still owned by the same family today. The “world famous” chili is similar to the hot dog topping variety, as the original name of this place was “All American Coney Island & Pool Hall.” It’s best as a topper for omelets, burgers and hot dogs, but you can buy it by the gallon too. Buns and bread are made in-house, which is rare nowadays. They’re closed on Sundays, so this will have to be a stop early for a Thursday or Monday game.

Man cannot live off beer and brats alone, so stop at Guth’s. This is a coffee bar, chocolate shop and ice cream joint all rolled into one. They open early, so stop for coffee on your way to tailgate, and grab a bag of chocolate-covered caramel apple for the kids. Hell, grab a turtle sundae for breakfast too and live it up. You deserve it.

If you skip the Highway 26 shortcut and go a little out of your way into Fond du Lac, you’ll be rewarded with some amazing pizza at Joe’s Fox Hut. Go to the back and order at the window, not from your bartender. When it’s ready, they’ll bring it out to you. The crust is thin, crispy, cut into squares, and has just the right amount of pepperoni grease. They’re open until 11 p.m. on Sundays for all your cheesy dinner needs.

If you need a little tranquility after a Packers loss — or, god forbid, a major injury — head south on Highway 45 from Oshkosh along Lake Winnebago to Blanck’s. They’re a supper club, though for once the menu and space have been updated in the last 30 years. Steaks, seafood and other hunks of meat rule here, but there’s also a salad bar. Sundays feature all-you-can-eat broasted chicken.

If you weren’t planning on staying in Green Bay after a night game but somehow woke up in a shitty motel with green and gold party beads still around your neck, you’re going to need a giant breakfast before you get to work the next morning. Two Brothers in Oshkosh is right off the freeway and will feed you a huge omelet with hash browns and pancakes starting at 5 a.m. Thank god for carbs.

There’s always one person in the group that would prefer margaritas to beer, so appease them at Solea in Neenah. There’s also tequila sunrises, sangria, and really cheap beer for everyone in the group (except the DD, of course). Guacamole and Tex-Mex food are a must because you will get hungry after a couple margs.

Sometimes you just need a quick bite to refuel before getting back on the road, but stopping at McDonald’s turns your stomach. Try Tom’s Drive In In instead, a regional chain in the Fox Valley area. You’ll get all the burgers, chicken sandwiches, fried fish, cheese curds and soft serve you need, all in an antiseptic but pleasant fast food environment. This Appleton location is right in front of a Woodman’s, just in case you need to grab a couple cases of beer.