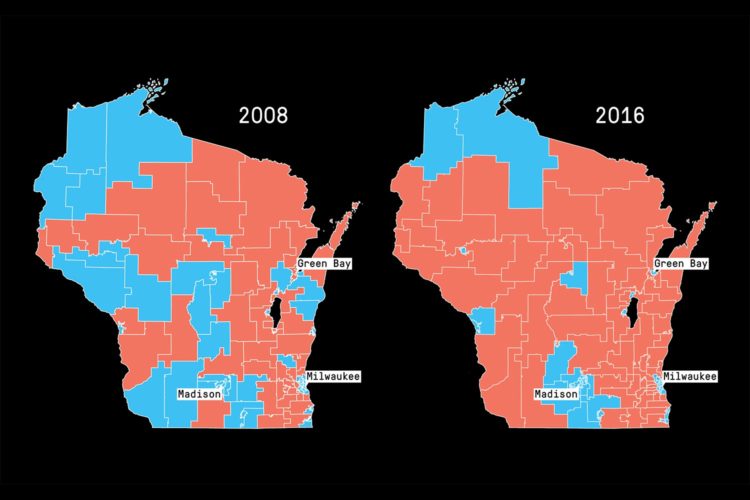 From the files of “Wisconsin is in the News for Bummer Reasons,” The Failing New York Times published an article last week that put the spotlight on the state’s pending Supreme Court case. With Gill v. Whitford, Wisconsin is primed to set a new legal precedent in regard to state legislature’s ability to continue gerrymandering, or manipulating the boundaries of an electoral constituency so as to favor one party or class (thanks Google!).

Gerrymandering has been a part of politics for as long as there have been political parties, and it’s a bipartisan practice. Traditionally, whichever party is in power has the right to redistrict the state. This is intended to leave room for necessary changes following updated census data, but is more commonly used to distribute known party supporters across districts where a majority will favor the ruling party. (For a helpful visual primer, check out this piece from The Washington Post.)

While gerrymandering is a common practice in almost every state, Wisconsin in particular has seen an aggressive series of updated district maps since 2010, when Republicans took control of the state Senate. Combined with recent changes in voter ID laws, Wisconsin Republicans are setting in motion a ripple effect to control (or rather neutralize) the effectiveness of blue votes. That control has paid off in an increased number of seats gained despite similar overall votes won, which is a major concern for Dale Schultz, former member of the Wisconsin Senate.

In 2011, Schultz was the only Republican Senator to vote against the Budget Repair Bill, which many Wisconsinites will remember as the bill which controversially struck collective bargaining rights from many state employees and launched the 2011 protests, ultimately culminating in Scott Walker’s successful recall election (and, to a certain extent, the spectacular tragi-comedy of his 2016 presidential campaign). Having benefitted from partisan gerrymandering himself, Schultz left office in 2015 and now works with the Fair Elections Project, which aims to curtail gerrymandering in the state.

Since defining its congressional districts is a state’s right, the Supreme Court has declined in the past to draw a line on excessive gerrymandering. Because of this, six different states have their districts drawn by independent or bipartisan committee, which has been shown to reduce partisan discrimination. But given that gerrymandering is so commonplace, and that the process is largely automated thanks to updates in algorithmic technology, there is an opening for the Supreme Court to draw a line in the face of excess. And if there’s one thing Wisconsin — the nation’s binge drinking leader as of 2015 — knows how to do well, it’s doing things to excess.

Gill v. Whitford will be put before the Supreme Court on Oct. 3. For more updates, follow the Fair Elections Project on Twitter.