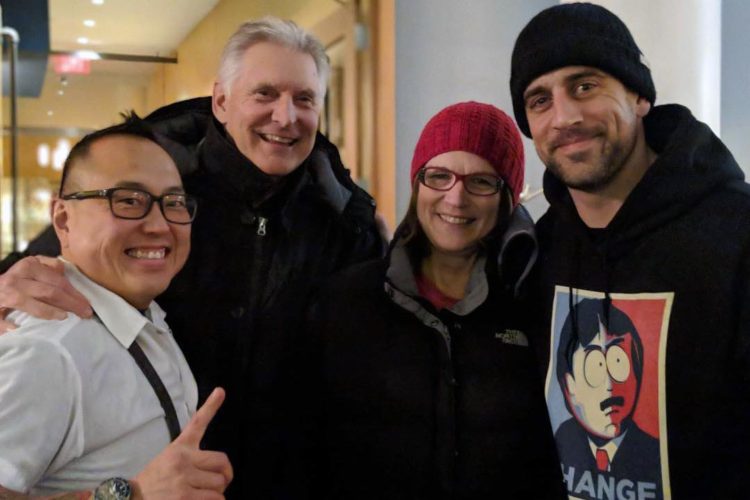 Aaron Rodgers is the closest thing to royalty the state of Wisconsin has, so (unfortunately for him?) it’s news any time he shows up somewhere. And last night, the two-time NFL MVP visited Madison.

Rodgers took in the Wisconsin Badgers-Indiana Hoosiers men’s basketball game at the Kohl Center alongside Monona native and retired professional golfer (and twice U.S. Open champion) Andy North. The pair caught a pretty great game, by the way. The Badgers were behind at halftime — to a program that hasn’t won in Madison in two decades — but came back to win 71-61, thanks largely to the clutch wizardry of Ethan Happ.

Lots of fun! Thanks for coming. 👍 pic.twitter.com/o0gADkeHXl

Earlier in the evening, Rodgers and North and North’s wife Susan enjoyed a meal at Graze, as IG’d by restaurateur Tory Miller:

When the high point of your year happens 2 days in…🤯. Great to see Andy and Susan North, and their buddy @aaronrodgers12 tonight @grazemadison! Thanks for coming in! #bestinthegame #packersforever 💚💛💚💛📷 credit @magdalenalorina

Ever the cosmopolitan, Rodgers dressed to impress: He wore a hoodie featuring a juxtaposition of South Park character Randy Marsh and the iconic Barack Obama “Hope” poster. Rodgers is an avowed fan of the Comedy Central show and has previously talked about his love of everyone’s favorite unhinged geologist, referring to Stan’s dad as a personal hero and quoting him on Twitter.

Apparently, my invite was lost in the mail for what looks like a pretty fun night. THANKS A LOT GUYS.