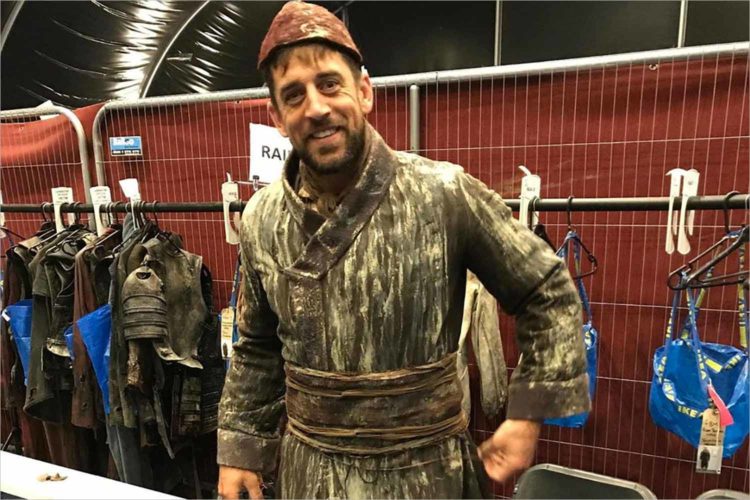 Warning: ‘Game of Thrones’ spoilers below.

For its final season, Game of Thrones is throwing a hail mary.

The mega-popular HBO series is hurtling towards its conclusion, to extremely mixed results. The action sequences are bigger than ever, but show co-creators David Benioff and D.B. Weiss are scrambling to close plotlines they seem to have forgotten about. So with the game on the line and only two seconds (er, episodes) left, Benioff and Weiss called in the king of the chuck-and-pray.

Last night, Green Bay Packers quarterback (and the one true King in the North) Aaron Rodgers became the latest celebrity to cameo in the series. After weeks of teasing it, Rodgers played a commoner during the the destruction of King’s Landing. It’s a blink-and-you-miss-it cameo, but Rodgers spoke about it on the show’s behind the scenes featurette, “The Game Revealed”:

Aaron Rodgers talks about his role in #GameOfThrones. “I was helping a woman, who was injured… then the hell with her I’m getting out of there.” 😂 pic.twitter.com/DcLFPDUrJH

Unfortunately for Rodgers he was on the losing side of the fight. Daenerys Targaryen (Emilia Clarke) has gone full mad queen, burning up the whole entire Golden Company much like Rodgers burns up defenses. Either way, the two-time NFL MVP’s cameo at least wasn’t as distracting as Ed Sheeran’s.

Rodgers is a longtime fan of the series. In 2017 he spoke to The Ringer about some of his theories, including guessing — correctly, it turns out — that power players Daenerys and Jon Snow (Kit Harington) were related. And to be honest, it’s kind of weirdly heartwarming to hear a superstar athlete talking about dragonglass and the Three-Eyed Raven.

I just hope that Benioff and Weiss can salvage what’s left of Game of Thrones in next Sunday’s series finale. Rodgers shouldn’t have to be a part of two disappointing seasons in one year.