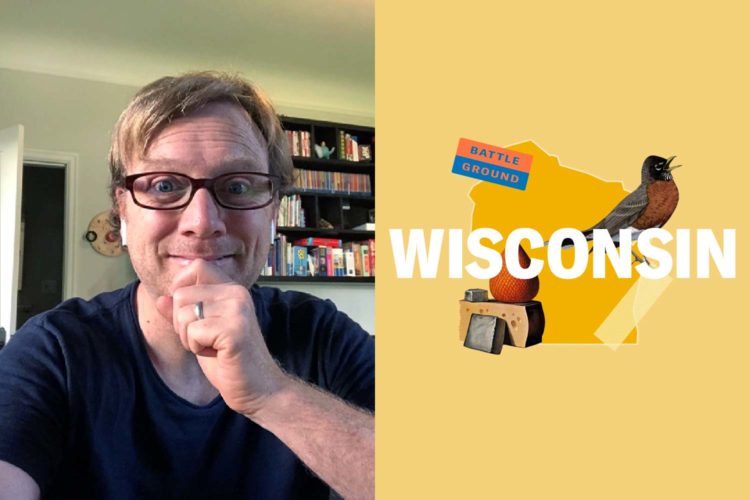 The worst thing about election cycles — well, it all sucks, but this part sucks especially hard — is the phone calls.

We are very much a texting society. For me, getting a live phone call is akin to my dentist telling me I need a root canal. (Though I haven’t been to the dentist in several years, so that wouldn’t be all she tells me.) And talking on the phone with strangers about politics, especially politics you may not agree with, is even harder. So you’d think it would get a little easier when the voice on the end of the line is that of, say, a well-liked comedy actor.

The actor in question here is the always cheery Andy Daly, best known for Review, Eastbound and Down, and dozens of voiceover roles. Last week he phone-banked for Wisconsin Democrats, according to his Twitter account. But why would the New Jersey native choose us?

Well, the 49-year-old comic says he asked his kids which swing state to “adopt” (as part of a campaign by Crooked Media’s Vote Save America) and they liked the way “Wisconsin” sounded. I agree, it’s very fun to say — and it turns out Daly has actually been helping out the state Democratic party for a few months now.

ANYWAY, Daly tweeted out some of his interactions with voters, and it’s as much a microcosm of the Badger State as you’d expect.

First call. Me: “I’m calling from Wisconsin Democrats to talk to people about the issues they care about most.” Him (pissy): “Y’know what I care about? You people not calling me all the time. Take me off your list.” That’s the worst that can happen & it wasn’t that bad. Back in!

As a professional comedian probably used to being heckled, Daly of course fired back.

By the way, I was calling for someone named Kathleen so my sick burn back to this guy was (bright and cheery) “Is Kathleen available?”. He hung up.

The only other person I’ve managed to get on the line was a nice woman who told me I had the wrong number. This is how we win!

Daly later spoke with a fellow who gets all his news from Facebook, and the pair agreed that it would be interesting to watch the two doddering presidential candidates square off in a battle of who’s sundowning the most. (Interesting? Yes. Terrifying? Also yes.)

it’ll be interesting to watch the debates and see both men side by side & determine for ourselves how mentally “with it” they are. He’s seen vids on Facebook that make Biden look out of it. I explained that they certainly exist with Trump and he was quiet. Oh well. Next call!

It’s unclear how many people the actor called, though he did say he got a lot of hang-ups. Given that we’re now under 100 days until the election, something tells me this won’t be the last time Wisconsin voters will hear Krombopulous Michael’s voice on the other end of the phone. To paraphrase that character: Andy Daly will call anyone, anywhere. Children, animals, old people… doesn’t matter. He just loves calling.