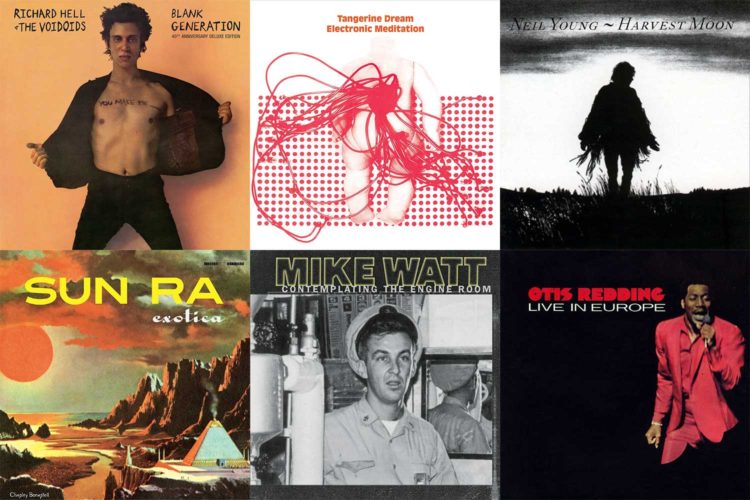 The holidays are officially in full swing, and that means gift-associated activities are imminent. As Thanksgiving revelry comes to a close, the chaotic commercialism of Black Friday comes crashing through the gates — and so will its participants, who are probably situated outside a Best Buy at three in the morning. If you insist on going out for the main event, instead try helping out the little guys by shopping at indie music stores in support of Record Store Day’s Black Friday event.

Record Store Day, April’s annual celebration of indie record shops, reprises its concept in order to take part in the holiday shopping season. For its second event, it aims to curate and promote a list of special Black Friday music releases. Now, you can please the music enthusiast in your life by giving them something special, like a reissue of a classic, a live album or an obscure special release. Or just some vinyl with a cool picture on it. Whatever works. What follows are some highlights of the releases dropping for Record Store Day’s biannual iteration.

While many record stores will be selling Black Friday special releases for the event, some stores are designated official Record Store Day Black Friday participants. Here is a list of stores in the Madison area who have pledged to take part: B-Side Records, Ear Wax Records, MadCity Music, Strictly Discs and Sugar Shack Records.

Disclaimer: Most Black Friday release specials have a finite amount of pressings in distribution, which are extremely limited. Be sure to contact your local record store to verify availability of an item you’re after.

Richard Hell and the Voidoids

Pioneering punk musician Richard Hell will celebrate the 40th anniversary of his seminal punk album Blank Generation with its re-release. The limited edition double LP and double CD package will include an entire second disc of previously unreleased tracks, which consists of rarities, alternate takes, live recordings and more. The bonus disc also features bootleg tracks from — wait for it — the group’s very first live appearance at the 1970s famed venue CBGBs. This gift promises to take any punk music aficionado back to where it all began.

German electronic band Tangerine Dream have reissued their debut album Electronic Meditation several times over the years, hoping each time that it reaches a few new ears of ambient experimentalists everywhere. The album consists of five tracks, each expansive and textured, with distorted guitars and feedback so relentless that it just might melt your brain.

With Harvest Moon, a Neil Young fan will simultaneously find one of his biggest songs and one of his most underappreciated albums. Released in 1992, it came out right at the end of the cassette era and on the cusp of CD technology. Now that vinyl is hip again, Harvest Moon will receive its first ever North American vinyl pressing. Young himself is known for appreciating good vinyl, so you can bet Harvest Moon on wax will sound exactly as it’s supposed to.

Fabled psychedelic jazz artist Sun Ra was a force to be reckoned with. His shows often transcended music and became fluid art, with acting, costumes, magic, visual effects and more. He made a point of fully engaging his spectators. Exotica (or Exotic-Ra) is Sun Ra in true fashion as three LPs in bright colors, featuring classic jams and previously unreleased ones as well.

Bassist Mike Watt was a key member in ’80s punk act Minutemen until the group’s abrupt end with the death of bandmate D. Boon. After that, Watt battled his way through deep depression to ultimately became a prolific musician with tons of assorted projects over the years. This iteration of his second solo release, Contemplating the Engine Room, will be the album’s first ever vinyl pressing, featuring three sides of music and exclusive access to an unreleased live show.

Black Friday has alt-country singer-songwriter Ryan Adams going retro with a cassette release, which isn’t the first time Adams had turned something on its head just for the sake of it. This RSD-only drop is the reissue of this year’s album Prisoner.

In the ’70s, the underrated and well-loved group Big Star cultivated the nascent concept of power pop to help it become the versatile subgenre that it is today. For Big Star’s Third Live, a plethora of acclaimed musicians came together to cover tracks from the group’s third album, including Wilco’s Jeff Tweedy, members of Yo La Tengo and R.E.M., and the sole surviving member of Big Star itself. This is a vinyl companion to the tribute, which thus far has only been available via CD and MP3. The LP also contains several tracks not included on the previously released versions.

It’s been nearly a half-century since Otis Redding’s fatal plane crash into Lake Mendota, just months after the R&B pioneer released his first live album (and his only non-posthumous one). The 50th anniversary reissue of Live in Europe is a mono release in red vinyl.

1990s ska-fusion favorites Sublime defined the genre, but did not typify it. Contemporaries within the genre imitated, but nothing could compete with the late Bradley Nowell and his bandmates. Debut album 40oz. to Freedom recently had its 25th anniversary (feel old yet?) and the surviving members are commemorating its release with a double LP picture disc drop, featuring the iconic sun logo on one.

Sloppy garage rock can be a lot of fun, and The Black Lips have got their organized mess down pat. This Sick Beat! is a 10” vinyl release that was produced by Sean Lennon. It consists of four tracks, two of which are brand new songs and all of which will aptly soundtrack the ridiculousness of shopping season, especially if you’re apathetic about the whole thing. Unfortunately, “Dumpster Diving” does not appear, as that song should always be listened to while watching shoppers trample each other at the local Walmart.