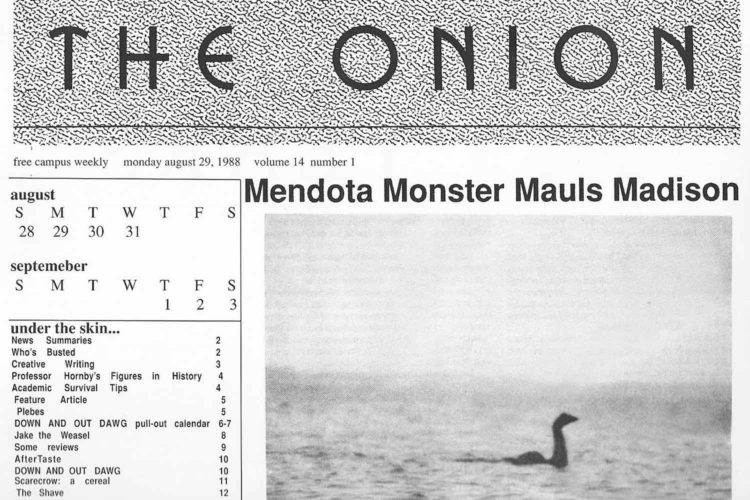 Since the 19th century, Madisonians have claimed to have spotted a sea serpent upwards of 25 feet long traversing the waters of both lakes straddling the isthmus. Newspaper reports from the period described a snake-like monster with a broad, flat-topped head and a long, spiked tail.

In the 1860s a couple was canoeing across Lake Mendota toward Governor’s Island when they accidentally bumped a log with their oar. Suddenly, the water began to churn and the “log” disappeared into the water.

“This was a monster of some sort, we have no doubt,” one of the canoers later wrote. “We were not too long in deciding that retreat was the better part of valor and we resolved to say nothing about the matter.”

But word spread, and serpent sightings picked up toward the end of the century. In 1892, boaters and spectators from the shore watched the serpent “undulating in an up and down motion” across Lake Monona toward Esther Beach.

In 1899, the Racine Daily Journal reported that two women spotted the creature while boating. “They started for shore and the serpent, apparently as much frightened as they, plunged, they say, into the depths of the lake, making a great deal of foam.”

An anthropologist of Wisconsin folklore, Charles Brown, described two sightings in 1917: In one, a fisherman off Picnic Point “received the fright of his life” when a “large snake-like head, with large jaws and blazing eyes” emerged from the water before him. In another, the serpent tickled the feet of two women sun-bathing behind a frat house.

But despite its fearsome exterior, the serpent was a gentle giant. Brown wrote that it was “a rather good-natured animal, playing such pranks as overturning a few canoes with his body or tail, giving chase to sailboats and other lake craft, uprooting a few lake piers and frightening bathers by appearing near beaches.”

And the skeptics thought perhaps “the reputed serpent [was] only a large pickerel, or perhaps a gar fish, with a collection of artificial baits clinging to its head.”

The friendly monster was named after the Algonquin hero-god Winnebozho, the creator of plant and animal life. Legend has it that the creature left by way of the Yahara River, but by the time he had departed he’d garnered a lasting nickname: Bozho.