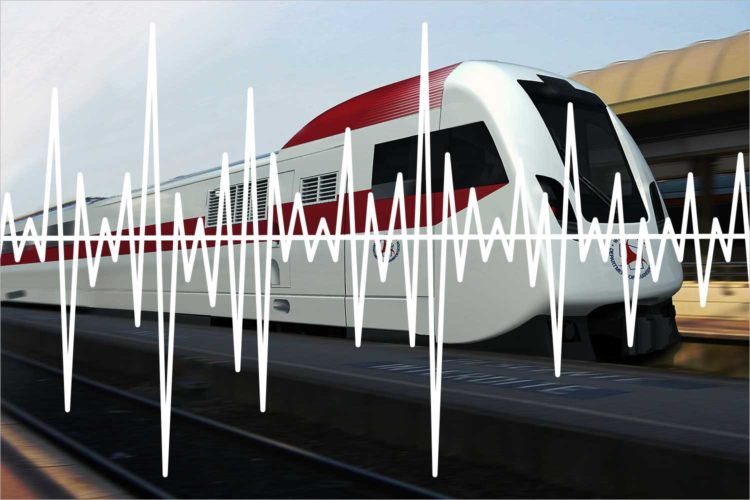 On paper, a podcast about trains doesn’t seem like it would work.

Unless you’re a rail enthusiast or an eight-year-old, it’s a rather niche topic. But Wisconsin Public Radio’s Derailed is the opposite: an engaging and informative exploration of Wisconsin’s failed attempts to bring high-speed train travel to the state. Much of that has to do with the fantastic reporting of Bridgit Bowden and Shawn Johnson. But credit is also due to Derailed’s sound wizards, Karl Christenson and Brad Kolberg.

Madison music fans will know Christenson and Kolberg as two-thirds of Icarus Himself, an experimentally inclined indie rock trio that amicably dissolved a few years ago. The two share a space in the labyrinthine WPR offices, where they served as technical directors for Derailed. Each are longtime producers for the network, dating back to their Icarus Himself days. Among other things, the pair spearheaded Set List, a WPR program that highlighted Wisconsin musicians. But despite their experience in both worlds, creating music for a podcast is much different than a rock group.

“With a band, you eventually settle on the ideal version of a thing,” Kolberg says. “But here, a given track is used up to, like, 10 times.”

That’s where Christenson came in. As Derailed’s primary composer, it was his task to create a soundscape that fit with Bowden and Johnson’s extensive reporting without overtaking it. Better still, they could avoid falling back on bland, royalty-free stock music.

“I knew I wanted it to be a mix of organic and digital,” Christenson says. He recorded the guitars and drums at his home studio, and later added synthesizers using the rig he keeps on his desk at WPR. Sometimes it sounds like NPR’s Serial, and sometimes it sounds like Radiohead’s Kid A. The music is amorphous enough that it pulls off the tricky task of acting as audio wallpaper (“vanilla sound,” as Kolberg puts it) without getting stale.

Musically, the Derailed soundtrack shares a lot with Icarus Himself. Christenson’s score is unintrusive and slyly sophisticated, the work of someone who’s spent much of his adult life manipulating sound. But unlike their pair’s old band, the music would only be a supporting character here.

Much of the work was tempering the “political wonky things,” Christenson says. And given that Bowden and Johnson had hours’ worth of reporting and research to comb through, there were a lot of wonky political things. The pair would work almost like an assembly line, with Kolberg assembling episodes on one side of the room and Christenson composing music on the other.

“I’d continue with my work, and he’d be over here writing a new piece of music on the fly and then just tweaking it to the specific needs of the episode,” Kolberg says. “There’s a whole batch of tracks that just sort of came together like that spontaneously.”

Sounds pretty rock ‘n’ roll to me, especially for public radio. And speaking of: Christenson doesn’t rule out the possibility of a future Icarus Himself reunion. The main roadblock is that frontman Nick Whetro currently lives in Iowa City, where he operates a food cart. For now, the six (soon seven) podcast episodes will have to tide over fans.

Derailed isn’t just a fascinating listen. It’s also an impressive musical project, the result of two talented artists bringing an exciting array of sounds and ideas to the table. There’s no high-speed rail travel in Wisconsin, but we do have a pretty great podcast about it. And the music is awesome.